Aven told Burt that “someone high in the Russian government” wanted “a communications channel between the Kremlin and the Trump Transition Team,” according to Special Counsel Robert Mueller’s recently released report. Aven wanted Burt, a former ambassador who had helped Trump’s campaign, to work on setting it up.

Burt later told Mueller’s team that the request was, in the words of the report, “outside the normal realm,” even for Burt, a well-traveled Washington insider who had worked with Aven for years. It looks even more remarkable now.

The “high” Russian official was none other than President Vladimir Putin, Mueller’s team would later learn. Amid what Mueller called a “flurry of Russian activity” during the Trump transition, the Aven outreach is the only publicly known instance in which Putin, a onetime KGB spy, was personally involved in directing Russia’s clandestine efforts with the incoming administration.

The surreptitious contacts involving Putin, Aven and Burt as described in the Mueller report contradict repeated assertions by Alfa Bank that it had no contacts with Trump or people around him. At the time of Trump’s election, Alfa Bank was at the center of a mystery over an unexplained surge in computer traffic from Moscow to the Trump Organization in the midst of the 2016 presidential campaign. Computer analysts concluded that Alfa Bank had developed a covert communications channel to the Trump Organization.

The bank has adamantly denied those assertions, saying in March 2017, for instance, that opponents were trying to use the Internet traffic to create “the false impression that Alfa Bank has business or other dealings with Mr. Trump.” Alfa Bank said separately that same month that the bank and Mr. Aven had not had “any contact with Mr. Trump or his organizations.”

Mueller did not address the cyber-traffic one way or the other in his report. That has left some Democrats on Capitol Hill unsatisfied. “Even in the wake of the Mueller report, we don’t know the meaning of the 2016 communications between Alfa Bank and Trump Organization servers, nor do we even know whether the FBI has fully investigated those links,” says Rhode Island Democratic Senator Sheldon Whitehouse, a member of the Judiciary Committee.

Burt, who was the U.S. ambassador to West Germany during the Reagan Administration, wears a number of hats in the 2016 story of Aven and Alfa Bank. He helped develop key points for an important foreign-policy speech that then-candidate Trump delivered in Washington in April 2016, with Russian ambassador Sergey Kislyak in attendance. Burt also dined during the campaign with Jeff Sessions, then a top Trump advisor, to discuss policy matters, Mueller said.

Burt has worked over the years with Alfa Bank and other Russian interests. He aided Russia’s plans for a massive gas pipeline, and currently sits on the board of a Luxembourg company, LetterOne, that Aven helped found in 2013 with other Alfa Group leaders and that is investing billions in American health care. It was at a LetterOne meeting that Aven first told Burt of the back channel idea.

“Putin suggested that Aven needed to take steps to protect himself and Alfa Bank,” against the possibility of U.S. sanctions, including by opening up the back channel, the Mueller report said. Putin never explicitly told him to create the back channel to protect against that threat, Aven told Mueller’s investigators, but he took his comments as “implicit directives, and that there would be consequences for Aven if he did not follow through.”

Burt took Aven’s idea to Dmitri Simes, the Russian-born president of a Washington think tank, the Center for the National Interest, where Burt served on the board. Burt asked Simes to arrange a meeting with Jared Kushner, Trump’s son-in-law, Simes told Mueller’s investigators. Simes was lobbying for Burt to be ambassador to Russia, and was speaking with Kushner about foreign policy issues.

According to Mueller’s report, Simes said he told Burt the secret channel “was not a good idea” because of the growing scrutiny over Trump’s alleged Russian ties. The Kushner meeting apparently never occurred. Burt, however, reported back to Aven that there was “interest and an understanding for the need to establish such a channel.” He said that while a “very influential person” advised him the idea was “too explosive” at the moment, it might be reconsidered in the New Year, Mueller said.

Aven said he, in turn, reported back to Putin in early 2017 about what Mueller’s report describes as his “lack of success.” Putin “continued to inquire” in later meetings, Aven said. He eventually told Putin’s chief-of-staff the FBI had subpoenaed him, asking “whether he had worked to create a back channel between the Russian government and the Trump Administration,” Mueller said, but Putin’s aide “did not appear to care.”

Burt insists his efforts led nowhere. “My understanding is nothing came of that,” he told TIME in an interview. “We concluded it wasn’t a good idea. I then contacted Petr [Aven] and that was the end of it.”

Mueller’s report is silent on why Putin thought Alfa Bank and Aven might be the subject of U.S. sanctions. Nor does it say why Aven may have found the danger of sanctions sufficient to take the “unusual” step of asking for Burt’s help in setting up the secret back channel to the incoming U.S. president’s team, or whether he simply did it at Putin’s suggestion.

Alfa Bank was neck deep in a controversy between Russia and the Trump campaign at the time. Beginning in the spring of 2016, according to cyber analysts, Alfa Bank’s computer servers in Russia had “pinged” a rarely-used email server connected to the Trump Organization more than 2,700 times with computer-domain “look-ups” — essentially a knock on the door from one computer server seeking to talk to another one. The “look-ups,” and were identified by independent computer analysts tracking Internet traffic.

One of them, Jean Camp, a computer science professor at Indiana University, examined Alfa Bank’s email “look-ups,” and posted an analysis of the Internet traffic soon after it surfaced, urging more investigation. A number of experts in the field, including Camp, said the computer traffic had the characteristics of a covert email chain that could facilitate the transfer of data or other hidden communications. The Trump server involved in the traffic was taken down in September of 2016, soon after the bank’s Washington representatives learned of questions about the suspicious activity.

Alfa Bank sticks by that claim when it comes to the question of communication between Alfa’s computer servers and the Trump camp. Any suggestion to the contrary “is false, it’s still false, and it will always be false,” Jeffrey Birnbaum, a spokesman for the bank with the BGR Group in Washington, told TIME when asked again recently about the suspicious cyber activity. “There was never any sort of electronic communication — ever,” Birnbaum says.

After the election, Daniel Jones, a former senior national security investigator with both the FBI and the Senate Intelligence Committee who now leads a private investigative firm, used a team of computer analysts to examine the Alfa Bank server traffic, and says that the computer traffic in 2016 was “highly unusual.” Jones’ team found that 80% of the traffic going to one particular server at the Trump Organization was coming from Alfa Bank. “The question is why?” says Jones.

Jones says the Mueller report deepens the mystery. “Who knows what they were doing with the Alfa server but this new evidence certainly raises all sorts of additional questions,” Jones said in an interview. Camp says she finds it striking that Putin personally directed Aven to create a Trump backchannel, even after Alfa Bank repeatedly denied that any relationship existed before that. “I feel vindicated knowing that there really were communications going on,” she said.

Mueller’s redacted report doesn’t mention the cyber-traffic, or say whether there were any communications during the campaign between Alfa Bank and the Trump camp. “We still don’t know the full story,” said Ilya Zaslavskiy at the Free Russia Foundation in Washington.

Mueller concluded that overall, “the evidence was not sufficient to charge that any member of the Trump campaign conspired or coordinated with representatives of the Russian government to interfere in the 2016 election.” He did report finding “numerous links” between Russia and the Trump campaign—during the campaign and after.

Burt’s role in the proposed back channel, as outlined by Mueller, is certainly one of them. Following his work on foreign policy for the Trump campaign, Burt said that he also played a limited role in the transition in preparing Rex Tillerson for his confirmation hearing as Secretary of State.

The Democratic-led House Judiciary Committee has launched a wide-ranging investigation into possible corruption and abuse of power by the Trump Administration, issuing letters and document requests in March, prior to the Mueller report, to 81 people and groups, including many prominent business, political and personal associates of the president. Alfa Bank and Aven were not on that list, but may be of interest in the wake of the Mueller report, a committee source tells TIME.

The House intelligence committee is also preparing oversight hearings based in part on Mueller’s findings. Staffers declined to say whether Aven and Alfa bank will be a subject of their ongoing probe. 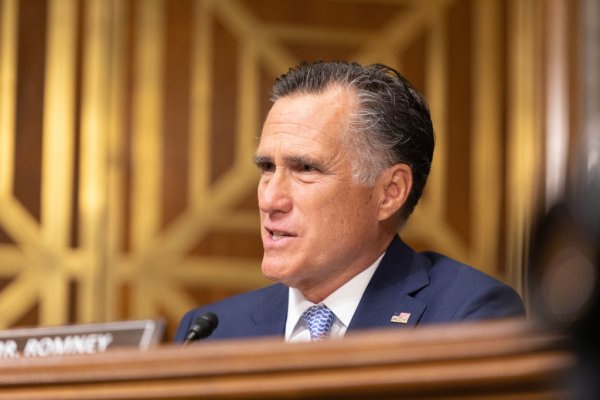 Mitt Romney Says GOP Rep's Call for Impeachment Is 'Courageous' Even as He Disagrees
Next Up: Editor's Pick