Elizabeth Gilbert’s 2006 memoir Eat, Pray, Love inspired countless women to pursue their own journeys of self-discovery even while drawing criticism for its insular brand of feminism. In her new novel, City of Girls, Gilbert sets her sights on a 20th century self-love story, an uneven yet decadently told tale about being a woman in a time when there was only one acceptable way to behave.

It’s the summer of 1940, and Vivian Morris, 19, has been kicked out of college and is moving in with her Aunt Peg in New York City, who runs a shambly theater. World War II is looming, but Vivian is focused on costumes, dancing and losing her virginity. She becomes fast friends with a showgirl named Celia; their relationship, the most captivating in the book by far, tests Vivian’s privilege (which Gilbert acknowledges by nodding to the character’s family wealth) and naivete as Celia teaches her to explore her sexuality. The writing may be nostalgic — illuminated by Gilbert’s glowing descriptions of city sidewalks and glitzy fashion — yet Vivian and Celia’s conversations predict the more modern idea that pleasure shouldn’t be shameful. But as a new show opens at the theater, Vivian becomes embroiled in a sex scandal that jeopardizes the entire production and ruptures her friendship with Celia.

Gilbert, who has written three well-received previous works of fiction in addition to her best-selling nonfiction, structures City of Girls as Vivian’s response to a letter she receives at the age of 89. But the narration falters after Vivian’s big falling-out with the theater and the dissolution of her life in New York. As the novel speeds up, allowing years of Vivian’s life to flash by, the story-telling can’t keep up with the emotional weight it’s meant to carry. By fleshing out the journey of Vivian’s life, Gilbert distracts from the strength of the coming-of-age story and the descriptive power of her prose when she lingers on a moment.

Still, she paints a compelling portrait of young Vivian’s plight and, in so doing, works with themes of freedom, responsibility and empowerment that feel both timeless and timely. In a moment when women’s desires are still being governed, this is a story about a woman who recognizes — and embraces — hers. 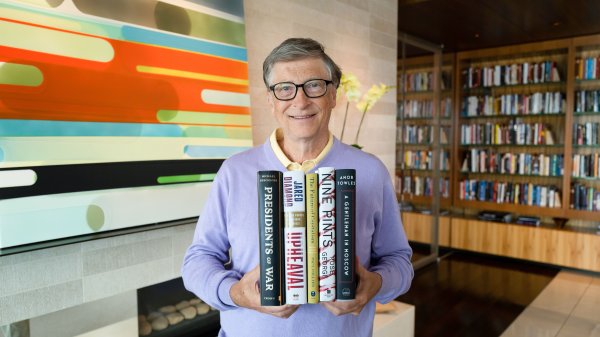 Here Are the 5 Books Bill Gates Thinks You Should Read This Summer
Next Up: Editor's Pick