We May Finally Know the Third Shocking Twist That George R. R. Martin Told the Game of Thrones Showrunners

After nearly a decade on the air, Game of Thrones has come to an end. And during the show’s series finale, “The Iron Throne,” fans may have finally learned what the third shocking twist that George R. R. Martin told showrunners David Benioff and D.B. Weiss he intends to include in his books was.

Emilia Clarke as Daenerys Targaryen in the series finale of Game of Thrones.

Following Hodor’s death in “The Door,” the fifth episode of Game of Thrones‘ sixth season, Benioff and Weiss told Entertainment Weekly that, during a 2013 meeting, the A Song of Ice and Fire author had revealed three yet-to-come “holy sh-t moments” that he already knew he was going to write into his series.

And although neither Martin nor the showrunners have yet confirmed this, judging by the finale, it seems as though the final twist could only be Jon Snow killing Daenerys Targaryen to keep the Mother of Dragons-turned-Mad Queen from ascending the Iron Throne.

The first “holy sh-t moment” took place in the ninth episode of season 5, “The Dance of Dragons,” when Stannis agreed to allow Melisandre to burn his daughter Shireen to death as a sacrifice to the Lord of Light. The second was the revelation that Bran Stark’s meddling in the past was the cause of both Hodor’s condition and death.

At the time of the 2016 interview, Benioff told EW that the third moment was “from the very end,” meaning Jon killing Daenerys would definitely fit the bill. And as far as shock value goes, Jon stabbing Dany mid-kiss before she ever got the chance to sit on the Iron Throne definitely lives up to the hype. 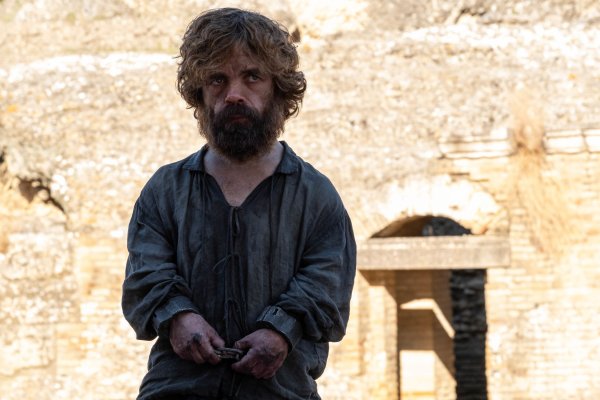 Why Tyrion's Trial Was So Important in the Game of Thrones Finale
Next Up: Editor's Pick