People from central Texas to across Mississippi valley continue to face a strong chance of severe weather with strong winds, large hail and even tornadoes amid a weekend full of storms. At least 11 tornadoes were reported in Oklahoma and Texas overnight Saturday going into Sunday, AccuWeather reports.

A tornado in Ballinger, Texas on Sunday possibly injured one person, according to AccuWeather. In Evangeline Parish, Louisiana, buildings were damaged as severe thunderstorms knocked one-third of homes and businesses out of power Sunday morning, according to Weather.com.

AccuWeather meteorologist Tyler Roys tells TIME that the severe weather started in parts of Texas and Oklahoma with thunderstorms, damaging winds and localized flooding on Saturday; parts of Texas also reported several tornadoes. Meanwhile, rain in the midwestern Plains – including South Dakota, Wisconsin and Missouri – is expected to continue until Tuesday, exacerbating the ongoing flooding.

Tornadoes on Saturday were reported at around 6 a.m. CT in Abilene and San Angelo, Texas, Roys also says. A tornado appears to have hit a baseball stadium Runnels County, Texas, although experts are still assessing the extent of the damage.

The storm continued to move into Arkansas on Saturday afternoon, when a suspected tornado caused roof damage to “numerous” homes, an official said, according to the Associated Press. The National Weather Service warned on Twitter that Arkansas may experience up to “ping pong” size hail.

The National Oceanic and Atmospheric Administration (NOAA) has described the flooding in the region as “unprecedented.”

The midwestern plains from eastern South Dakota and Wisconsin to southern Missouri are also facing ongoing problems with flooding, and Roys warns that the rain could “prolong” the issue.

“These storms are not helping it at all,” Roys says.

The Southern Plains will bear the brunt of the weather Sunday into Monday, expecting a “moderate risk of severe thunderstorms,” NOAA says. The Ohio Valley is also likely to face large, damaging hail – and possibly more tornadoes. 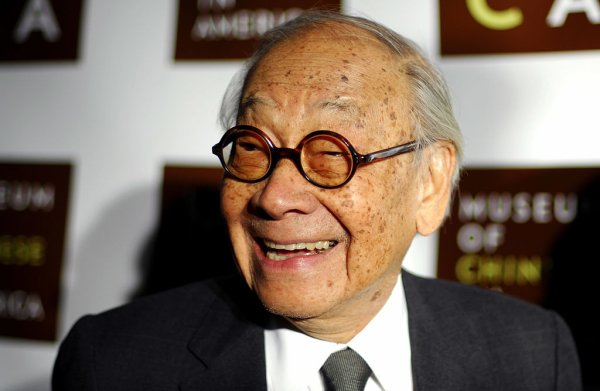 Renowned Architect I.M. Pei Dies at 102
Next Up: Editor's Pick