Jepsen, a Canadian singer-songwriter, is no stranger to viral fame, having long been the subject of memes and passionate support from her fans. But for those who haven’t followed the “Call Me Maybe” star’s career in the seven years since she topped charts with that out-of-left-field single, the fierceness of those devotees may come as a surprise. Jepsen hasn’t had a song crack the Top 10 of the Billboard Hot 100 since 2012, but she’s doing just fine. Better than fine, in fact. Based on the potent praise lavished upon her online, you’d think she was the biggest pop star in the world, sitting comfortably alongside longtime titans like Beyoncé, Lady Gaga and Rihanna. So how, exactly, did Jepsen develop this extreme cult of popularity?

Jepsen, who grew up in British Columbia to two sets of teacher parents, attended a performing arts college before swerving into pop. She’s a prolific songwriter with a serious work ethic, known for being unable to go a day without writing. After discovering her love of the craft in college and putting out a folksy debut, she hit gold with “Call Me Maybe”—and for a minute, Jepsen was ubiquitous. At college parties, her effervescent song was the soundtrack of the evening; in car radios across the U.S., it was the song of the summer, an unstoppable hit beloved even by Justin Bieber. But while many aspiring stars would have doubled down on that success, Jepsen took a beat, instead heading to Broadway for a stint as Cinderella.

Next came her 2015 follow-up album E•MO•TION, which earned critical acclaim for its bright, synth-driven production and sharp songcraft. The album underperformed commercially, but it also launched a universe of social media memes, re-establishing Jepsen as one of pop’s online icons. There was a Vine-based viral moment involving a saxophone riff; there’s the ongoing compliment-spam that adorns her social media profiles, with each fan proclaiming her “queen” of something; there was even an inside-joke movement to give her a sword. Jepsen became a symbol to fans who wanted a different kind of pop star, the kind of celebrity worth rallying behind.

And now it’s spring 2019, and Jepsen has just released Dedicated following a period of personal and professional shake-ups. “I wanted to indulge in all the extremes of everything I was going through at the time,” Jepsen tells me of her new music. That includes a breakup, weeks spent traveling solo through Italy, working in a songwriting camp in Nicaragua, the beginnings of a new relationship and a process that involved writing over 200 songs before whittling down the track list. “I still feel like I can’t believe this is my job, and in order to deserve it, I need to hustle,” she says. She sounds almost breathless as she tries to get this across. But she has a guiding principle: “I’ve learned that the best things that work are what comes from the heart, really.”

That deep-seated sincerity means fans see her less as an idol—an untouchable, goddess-level megastar—than as a person they can trust, a celebrity who seems like a friend. That’s true of plenty of contemporary artists who have built careers on a platform of authenticity, of course, but Jepsen stands apart: Not everyone has a fan-driven festival dedicated to them, like Jepsen has had with the multi-year CarlyFest.

“One of the driving forces behind her fans being so extra on the internet, in addition to genuinely liking her and what she puts out in terms of music and videos, is there’s like this sense of injustice that this critically acclaimed album deserves more recognition,” says superfan David Vazquez. “But also, she herself is this very humble music maker.” Jepsen’s catchy “Call Me Maybe” was already primed to become meme material. But that was just the beginning: Vazquez was one of the early Vine users to popularize the meme splicing a sax riff from her single “Run Away With Me” over video content. (He’s now been to at least five of her shows.) He says it helps that Jepsen connects particularly with the LGBTQ+ community. “Honestly, we love an underdog,” Vazquez says. “But also it’s the music that traditionally we like. It’s what plays at gay bars. It’s what we talk about.”

For her part, Jepsen seems genuinely pleased—and baffled—by her online treatment. “I love that they have my absurd sense of humor,” she says of her fans. “I’m always looking for a weird and wonderful joke.” Consider: one of her new music videos, featuring the romantic appeal of… a cat.

Jepsen is also something of a pop artist’s pop artist. “I’ve never been attracted to the celebrity side of being an artist. I do it for the fun,” she says. Singer-songwriter Maggie Rogers, whose star rose thanks to her own viral hit, “Alaska,” which was co-signed by Pharrell Williams, says she’s grateful for Jepsen—both as a creator who opened her eyes to the breadth of what pop music could be, and as an industry example of how to navigate the rapids of fame without losing her identity.

“When I was struggling with my virality, for lack of a better word, and the pressure, and finding peers that shared that experience, she really opened her doors,” Rogers says, recalling a dinner with Jepsen in L.A. “Pop at its best makes it look easy. And Carly makes it look completely effortless. It’s easy to tell the truth with you and an acoustic guitar. It’s hard to tell the truth with a synthesizer and a drum beat. But she never misses.”

On Dedicated, Jepsen let her instincts guide her through a range of sounds and feelings, exploring the wealth of “colors and flavors” that she wanted to express after “Call Me Maybe”: See the “chill disco” of “Julien,” the blissful self-love pop of “Party for One” and the euphoric ’80s energy of “Want You in My Room.” Jepsen is unafraid of feeling feelings and expressing them in a pure, direct way. “I think it’s very cool to be uncool and just shamelessly feel it all,” she says; she’s not confident in a song until she’s escalated its emotion “times 100.” Her song “Too Much” is practically a mission statement. “When I feel it, then I feel it too much/I’ll do anything to get the rush,” she sings, then turns it around: “Is this too much?” She’s an expert in intensity; even in the studio, she says, she ends up standing and dancing as she’s working.

Not that Jepsen’s all sunshine and butterflies—but she’s certainly known for exuding a type of accessible positivity. Growing up, she says, her mother’s word for her was “joy.” This is part of what proves so magnetic for fans who find her relatable. Writer and fan Lily Puckett was so inspired by Jepsen’s music that she launched a weekly online newsletter just to unpack every track of E•MO•TION in lengthy musings for months. “If she weren’t Carly Rae Jepsen, she would be like ‘our friend, Carly,'” Puckett says. Rogers also connects to her relatability. “It didn’t feel like she was ever lying to me. Britney and her python—there was such a facade,” she says. “Carly, she feels like your girl friend immediately.” Same thing for Vazquez, who says he thinks the fan community finds her humility “endearing.”

The feeling is mutual. At one of her first big shows in New York at Irving Plaza, Jepsen was “incredibly nervous,” she says. But everything changed when she walked in the room. “You know how you can feel a hippie-ish energy? It was so full of love,” she says. “It felt like I could walk out there and fall flat on my ass, and everybody would be like ‘It’s OK! Get up and try again!’” 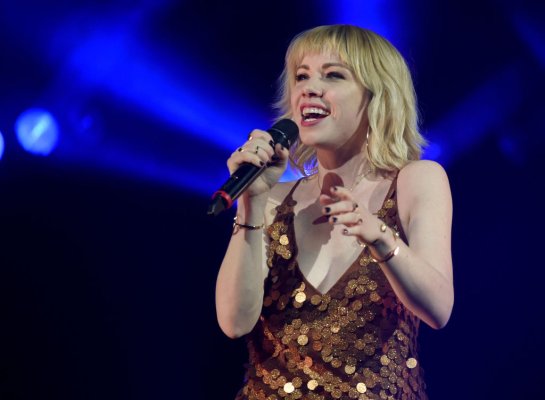