People look at skulls at the Choeung Ek memorial in Phnom Penh on May 20, 2018, as Cambodians observed the annual remembrance day
TANG CHHIN SOTHY—AFP/Getty Images
By Andy Kopsa

Reenactments of the Khmer Rouge genocide are annual events in Cambodia. On the grounds of the famous killing fields of Choeung Ek, outside the capital of Phnom Penh, a troupe of young performers will take their positions on an open field. The loudspeakers will blare haunting music and words of hate. Actors carrying wooden machine guns will simulate the mass murder of civilians. Children aren’t spared and neither are the elderly. It is May 20, the National Day of Remembrance.

The annual observance marks the day in 1975 when the communist regime of Pol Pot and the Khmer Rouge began the mass killings of the Cambodian genocide. Such national days of remembrance are often a key part of confronting and acknowledging a troubling past; Germany’s decision to create a day to remember the Holocaust, for example, has been seen as an important step forward. But Cambodia’s version is complicated by the purpose the day has served for the governments that followed the Khmer Rouge — and the questions it raises are profound: What does it mean when a government decrees that the past must be remembered in a certain way? And how do you memorialize something you can’t forget?

Pol Pot — the nom de guerre of a man named Saloth Sar — had rapidly climbed the ranks of the Khmer Rouge, Cambodia’s “red communists,” in the 1960s, and became the leader of the guerrilla fighters who orchestrated the systematic take-over of the country in the 1970s. Starting in the northern provinces, the regime worked its way to Phnom Penh. In April of 1975, they seized the city and forced residents to evacuate. By late afternoon the wide boulevards of the city were emptied of cars and filled with a procession of soldiers and trucks loaded with concertina wire and weapons. Families fanned out from the city on foot, not knowing where they were meant to go. Many, falsely told they could return in a few days, left with only the clothing they wore.

By that point, Cambodia had already been devastated by wars from within and without: the First Indochina War, the Vietnam War and their own civil war. A flood of refugees spilled into Thailand while others from the countryside came to Phnom Penh. Rice fields were decimated, livelihoods were lost and people went hungry. The Khmer Rouge stepped into the breach, espousing a vision of a communist utopia. The struggling rural farmer would get the same food, shelter and life as the city-dwelling doctor. It was an easy sell with horrific consequences.

The mass killings began about a month after Phnom Penh fell. Pol Pot convinced a destroyed nation to join an agrarian revolution turned genocide; an estimated 1.7 to 2 million people were killed including ethnic minorities, Buddhists and Cham Muslims died under his regime.

The official remembrance of those events began to take shape almost immediately after Cambodia was liberated from the Khmer Rouge in 1979, as the new government looked for ways to legitimize itself. The newly formed People’s Republic of Kampuchea (PRK) began distancing itself from the regime — at least outwardly, as many of its own leaders had been officers in the Khmer Rouge too. The Day of Remembrance, first staged in 1984, was originally known as The National Day of Hatred Against the Genocidal Pol Pot-Ieng Sary-Khieu Samphan clique and the Sihanouk-Son Sann Reactionary Groups.

Anthropologist Alex Hinton has written that the Day of Hate was a way for the PRK to keep anger toward the Khmer Rouge active so that they could put it to use for their own political purposes if needed. In his book Voices from S-21, historian David Chandler writes the PRK “worked hard to focus people’s anger onto the ‘genocidal clique’ that had governed Cambodia,” as the “new government based its legitimacy on the fact that it had come to power by toppling the Khmer Rouge [though] it was in no position to condemn the entire movement, since so many prominent PRK figures had been Khmer Rouge themselves.”

In the 1980s and ‘90s, the Day of Hate was staged on a massive scale. Paper effigies of Pol Pot were burned and survivors told the true horror stories of their lives under the Khmer Rouge. These events were critical to the PRK leadership reinventing itself, eventually becoming the Cambodia People’s Party of today, the party of Prime Minster Hun Sen. While attendance wasn’t compulsory at the original days of anger, it was strongly encouraged and with the help of local authorities’ mass turnout was assured. After years of war and the Khmer Rouge, the people were left starving in a land littered with landmines and mass graves. The day of hate fell into place easily on this backdrop.

But in 2018, Prime Minister Hun Sen decreed that May 20 was no longer the day of hate. Instead, it would be the National Day of Remembrance. Hun Sen not only changed the official name of the holiday, he told reporters it was now set aside to “respect and pray for the victims who passed away from Democratic Kampuchea (DK) regime.”

His decree, timed during an election year, also created a time to praise the Cambodian People’s Party for all its “achievements” since the DK was overthrown — and to cast Hun Sen as protecting citizens from the not-so-distant terror. Hun Sen “has a particular knack for playing on fears of a return to the dark days of massacres and civil war,” writes Sebastian Strangio, an independent journalist and author of Hun Sen’s Cambodia.

However, a 2016 Open Society Justice Initiative Report on Cambodia’s war-crimes tribunal found that at least two court cases stemming from the genocide fell apart because they could “embarrass” the CPP and Hun Sen by revealing ties to former Khmer Rouge members.

But, with or without an official day to remember the horrors of the Khmer Rouge, memories of the atrocities are woven through the daily lives of those who survived the regime and their descendants.

Nowhere is that fact clearer than at the secret prison known as Tuol Sleng, or S-21, where Pol Pot sent officers and officials to be tortured. Today, it’s the site of a genocide museum. When the Vietnamese liberated the city, they found piles of bodies at S-21; some estimates say 18,000 people were killed there alone. The museum is designed to be tourist-friendly. Visitors are given headphones and guided through the complex via audio tour. Photos of S-21 victims paper the walls but the brutality of the Khmer Rouge is hard to see behind Plexiglas.

Chheng Samin, one of the employees there, was born in a pagoda three months after the evacuation of Phnom Penh; she says soldiers forced her mother to return to work the morning after Samin was born. She now has two children of her own, and says she is grateful her children have happy childhood memories far different than her own.

“My grandmother died during the Khmer Rouge and I remember thinking ‘don’t put my grandma in that boat and take her away,’” Samin told me, laughing at her 3-year-old self, a girl who thought a casket was a ship.

Chheng Samin was born under a pagoda shortly after the fall of Phnom Penh. She holds a picture of her mother, Chheng Samit, who survived the Khmer Rouge but died young. She now works at Tuol Sleng.
Photographer: Andy Kopsa

Not far from Tuol Sleng is a one of the twenty thousand or so killing fields of the genocide. Choeung Ek on the outskirts of Phnom Penh is perhaps the most well know. After the fall of the Khmer Rouge it was a collection of abandoned buildings and a field of bodies.

Now it is a tourist destination too. An ornate stupa surrounds a stories high scaffold, each level lined with human skulls. Walking the grounds visitors are guided through buildings and alongside unexcavated fields; a shirt or dress held by the gnarled roots of a banyan tree like an insect preserved in amber.

There, on May 20, tourists will again join scores of saffron-robed monks and local residents to watch the performers act out Khmer Rouge atrocities with appropriate horror.

But for people like Samin, memories of the Khmer Rouge are more personal, and perpetually close to the surface. I asked her if working at the museum as a survivor of the genocide was difficult. For the most part, it isn’t, she tells me — but one thing does get to her. In the main hall, an iconic photo is displayed, of a mother holding her baby, cataloging their arrival at S-21. That’s hard for her to see some days. “That,” she said, “could have been my mom and me.”

Andy Kopsa is a reporter based in New York City. 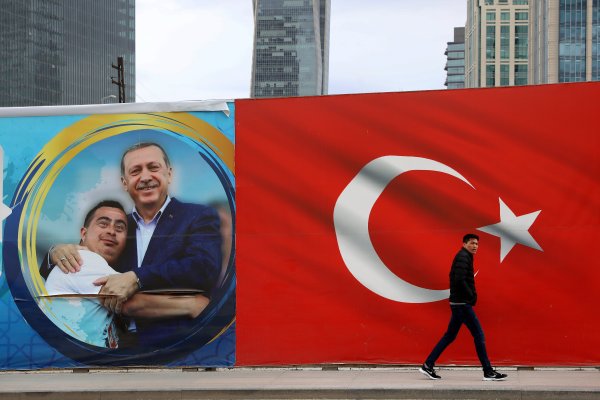