After seeing the aftermath of Daenerys’ destruction of King’s Landing, Tyrion Lannister made his disgust known by resigning as Hand of the Queen in the Game of Thrones finale. He was then promptly arrested by the Unsullied, and following Daenerys’ death, put on trial in front of a council made up of the nobles of Westeros.

This development was a symbolic moment for the character, serving as a callback to Tyrion’s many trials throughout Game of Thrones history.

What happened in Tyrion’s trial?

Despite the fact that Grey Worm wanted to execute him for betraying Daenerys, Tyrion was able to earn a respite by once again talking his way out of a tight spot. After Samwell Tarly proposed that they allow everyone in the realm to vote on their new ruler, Tyrion suggested that they narrow the selection committee down to just the lords and ladies of Westeros. He then presented a compelling argument for why Bran would be the best person to rule over the Seven Kingdoms — well, six, since Sansa insisted that the North remain independent.

Bran then proclaimed that Tyrion’s punishment for his crimes would be serving as his Hand of the King. “He’s made many terrible mistakes,” Bran said. “He’s going to spend the rest of his life fixing them.”

How did Tyrion’s trial bring his story full circle?

Trials have been a major part of Tyrion’s journey for nearly the entirety of Game of Thrones‘ eight-season run. After being accused of hiring an assassin to murder Bran Stark in season 1, Tyrion was placed under citizen’s arrest by Catelyn Stark and put on trial at the Eyrie in front of Lysa and Robyn Arryn.

Tyrion quickly realized that he had no chance of being judged fairly and would soon be flying through the moon door if he didn’t demand a trial by combat. But when he named his brother Jaime as his champion, Lysa insisted that the trial take place that day. It was then that a certain sellsword named Bronn stepped up to fight in Tyrion’s stead and defeated Lysa’s champion to prove his innocence.

Cut to season 4 when Tyrion was accused by Cersei of poisoning Joffrey at the Purple Wedding and put on trial in front of three judges: Mace Tyrell, Oberyn Martell and Tyrion’s own father, Tywin Lannister. The crown called witness after witness — including Ser Meryn Trant, Grand Maester Pycelle, Cersei and Varys — to testify against Tyrion while he was unable to defend himself and it was again clear that things weren’t going to go in his favor.

Recognizing how dire the situation was, Jaime eventually offered to leave the Kingsguard and take his place as Tywin’s son and heir at Casterly Rock if Tywin would allow Tyrion to live — which was what Tywin was gunning for all along. Tywin agreed that if Tyrion pled for mercy after he was found guilty, he would permit him to live out his life in the Night’s Watch.

Unfortunately, when the crown called Tyrion’s former lover Shae as their final witness, Tyrion was not able to reign in his emotions and what followed was one of the most iconic speeches in Game of Thrones history. After confessing to being guilty of “being a dwarf,” Tyrion berated the people of King’s Landing for hating him despite the fact that he saved them from Stannis during the Battle of the Blackwater. He then again demanded a trial by combat to decide his fate, bringing his lifelong tension with his father to a head.

This time, Oberyn volunteered to fight as Tyrion’s champion in hopes of getting revenge on the Mountain for brutalizing and murdering his sister, Elia Martell, and her children, during the sack of King’s Landing. Despite his size disadvantage, Oberyn managed to impale the Mountain in the stomach with his spear. But in his desperation to not only get the Mountain to confess, but also name Tywin as the one who gave him the order, he took his eyes off his opponent long enough for him to swipe his feet out from under him and horrifically crush his skull. Tywin then sentenced Tyrion to die.

With the help of Jaime and Varys, Tyrion was able to dodge death once again. But on his way out of the Red Keep, he couldn’t resist paying one last visit to his father. And killing him.

This decision set Tyrion on a crash course to meeting Daenerys and signing up to serve as Hand of the Queen. But in the Game of Thrones‘ series finale, Tyrion’s history seemed like it may finally catch up with him.

But the fact that Tyrion didn’t go on the defensive ended up being the thing that saved him. Whereas in the past, he was innocent of all the crimes he was tried for, this time, Tyrion knew he was guilty and was ready and willing to admit it. “I thought I was wise but I wasn’t,” he said. “I thought I knew what was right, but I didn’t.”

Following his final trial, Tyrion took his rightful place as Hand of the King, a position that no one else in the realm could be better suited for. As Varys once told Shae, “Tyrion Lannister is one of the few people alive who could make this country a better place.” 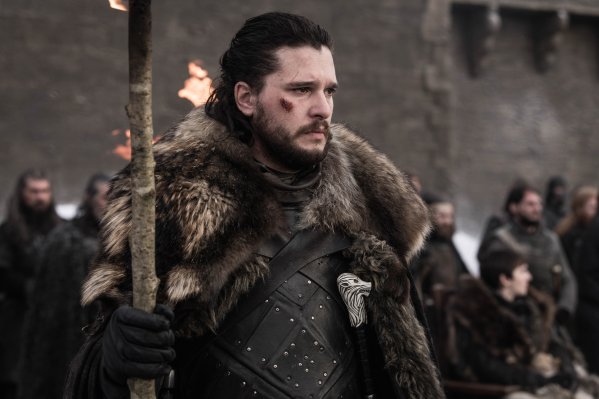 How That Heartbreaking Jon Snow Twist May Fulfill a Crucial Game of Thrones Prophecy
Next Up: Editor's Pick