A visitor holds a semi-automatic shotgun during the 45th edition of the Arms Trade Fair, in Lucerne, Switzerland on March 29, 2019
Stefan Wermuth—AFP/Getty Images
By Helena Bachmann / Geneva

The hills of Switzerland will soon be alive with the sound of gunfire.

The country’s largest annual shooting competition, the Feldschiessen, held between May 24 and 26, attracts an estimated 130,000 sharpshooters of all ages from all over Switzerland. It is not uncommon to see kids as young as 12 handling weapons with the steady-handed assurance of more experienced marksmen.

But the Feldschiessen — or field shooting competition, in English — is not just a recreational pursuit. It is anchored in a deep sense of civic responsibility and national pride in this Alpine nation of 8.5 million. Mandatory military service for males, for instance, is considered the pinnacle of patriotic duty.

Guns in Switzerland are seen as more than just a safeguard of neutrality and national security. More than any other Europeans, the Swiss pride themselves on their ability to manage their gun culture in a controlled and organized manner.

But now that culture is facing an existential threat from abroad. On May 19, the Swiss will vote on whether to keep their cherished shooting traditions intact, or submit to stricter gun regulations required by the European Union.

After the terrorist attacks in Paris in November 2015, when 130 people were killed mostly by gunfire, the E.U. restricted certain semi-automatic firearms and magazines, and made the purchase, licensing, and registration of weapons more onerous.

While Switzerland doesn’t belong to the E.U., it is part of the bloc’s Schengen zone that can be visited without a visa or passport by citizens of 26 European nations — and so Brussels is urging the country to comply with its laws. If Switzerland votes to refuse, it might be excluded from the Schengen zone, along with the tourism revenue and police and judicial support membership brings.

That’s why the government and most political parties here are urging voters to accept E.U.’s regulations in the nationwide ballot on Sunday. If approved by the electorate, the government argues on its website, the new law “will not change Swiss gun traditions,” including the ability to keep military weapons in soldiers’ homes, a custom dating back to WWII, when every man had to be armed and ready to defend his country at a moment’s notice.

But many here say the new law would be off-target. “The bureaucratic effort involved in buying guns would be many times larger,” says arms expert Jean-Paul Schild. “And it would bring nothing in terms of security and anti-terrorism, since today’s weapons are already registered.”

Schild is the owner of Schild Waffen, a large gun dealership in the northern town of Wallbach. He won’t reveal how many firearms he sells, only that most customers buy “primarily handguns, hunting and sporting rifles, and collectibles.” Many of his clients are women, reflecting the fact that guns are an integral part of not only military traditions, but recreational activities as well.

Barbara Keller-Inhelder is one example.“I am from a traditional Swiss family of shooters and like to practice,” she says. Keller is also a member of the Swiss Parliament and sits on the Security Policy Commission. Like Schild’s, her views reflect the conservative positions of her political group, the Swiss People Party, which has been actively campaigning against what it calls “the E.U.’s interference” in Swiss national affairs.

“Switzerland is the safest and most secure country in Europe, even though it has a community of several hundred thousand shooters, most of them with their personally owned weapons,” she says.

In fact, the Swiss pride themselves on being heavily armed – officially with 28 guns for every 100 people, according to Small Arms Survey, a Geneva-based NGO. That’s comparatively little compared to the United States, which has the world’s highest rate with 1.2 firearms per capita. But lobbyists claim the real number of arms in Switzerland is much higher because registration of guns became mandatory only in 2008, and statistics don’t include millions of undeclared weapons.

“Our best estimates are between 14 and 18 million firearms in a country of 8.5 million people, making Switzerland’s density double that of the USA,” says Marc Heim, member of the Board of PROTELL, the country’s gun lobby.

Yet despite the prevalence of weapons, gun homicides here are among the world’s lowest — 0.5% per 100,000 people, as compared to nearly 5% in the U.S.

The reason this gun-happy country has so few murders by firearms is “attitude and education,” Heim says, explaining that his own children, like many others, grew up around weapons and learned to safely handle guns and shoot by 4 years of age. “It’s just a normal part of life,” he notes.

Historian Josef Lang agrees that Swiss guns are not as widely used to commit violent acts as they are in the U.S., because “we have less social problems and less social exclusion.”

But Lang’s personal experience as a survivor of a massacre had given him a different view of weapons. He was a member of the state parliament in the city of Zug in 2001, when a gunman stormed into the chamber and started shooting. Lang hid under a desk as bullets flew, surviving the worst mass murder in Switzerland’s history, while 14 of his colleagues were killed and 14 others wounded.

“Even though I was a soldier and kept my army rifle at home, this massacre strengthened my determination to speak out for less weapons, more gun control, and stronger laws,” Lang says. The upcoming referendum, he says, “is a step in the right direction, as the proposed reform would strengthen the control of weapons.”

It is precisely these additional restrictions that are firing up many Swiss gun owners, who argue that the sale of weapons is already tightly regulated in this safety-conscious society. To buy weapons from an authorized dealer, citizens or legal residents over the age of 18 require a permit from the government and no criminal record or history of mental illness.

However, rifles and semiautomatic long arms used for hunting are exempt from these requirements. And no license is needed for transactions between private individuals.

But while the prospect of having stricter rules is daunting for Swiss shooting enthusiasts, they are even more angered about having to bow to the demands of the European Union, fearing it would create a precedent for other threats to its sovereignty. “The guns matter, of course, but most importantly, our independence will be lost,” PROTELL’s Heim says.

This sentiment is echoed by parliamentarian Keller. “Do we accept the interference of Europe in activities for which a sovereign and secure country like Switzerland should be solely responsible?” she asks.

The answer won’t be known until votes are counted on May 19, but in the meantime, there seems to be rising interest in gun ownership. Police records show that in some regions, 40% more gun licenses have been granted recently than in previous years.

This may well be an indication that whichever way the vote goes, the Swiss are not ready to lay down their arms. 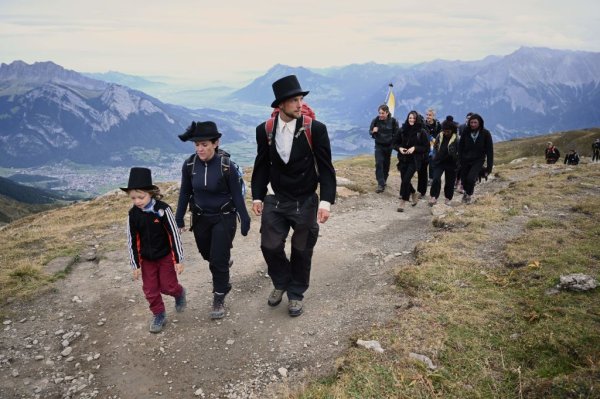 With 'Deepest Sadness,' Swiss Mourn Passing of Alps Glacier
Next Up: Editor's Pick