Jeopardy! has been a reliable nightly fixture on TVs across America for decades. But current contestant James Holzhauer is showing it’s never too late to teach an old show new tricks.

Holzhauer, a professional sports gambler from Las Vegas, had won 22 straight games by the time the show took a break in early May for its Teachers Tournament. He’s due to return to the show on May 20, but that’s already the second-longest streak since Jeopardy! lifted a five-game cap for returning champions back in 2003.

Like all strong players, he rings in faster than his competitors and is smart enough to deliver the correct response. But it’s Holzhauer’s crushing money strategy that sets him apart. Rather than working through categories systematically, starting with the small-dollar clues at the top of the board, Holzhauer goes straight for the most lucrative clues at the bottom.

Then, he takes full advantage of the Daily Doubles. These clues allow players to wager any amount of money they’ve earned. It’s unusual for players to bet all or most of their pot, but Holzhauer, drawing from his gambling experience, does this regularly, to effectively double his already large lead.

Anyone can wager large sums. But not everyone has the stomach for it. Even Holzhauer concedes that he has to consciously keep his anxieties in check during the game. “In gambling we say you are ‘on tilt’ when your mood gets in the way of making your best decisions,” he says. “And nobody plays well on tilt.”

To fully grasp his dominance, consider that the prior record for single-game winnings stood at $77,000. That’s an average game for Holzhauer, who has played five games that topped $100,000. At $1.7 million, he ranks second in total regular-game winnings—which excludes specials and tournaments—behind Ken Jennings, the Jeopardy! whiz who took home $2.5 million from a 74-game tear in 2004. And the gap is closing quickly.

It turns out that Jennings and Holzhauer have cross paths before. In 2012, Jennings hosted a trivia contest in Seattle. “There was a very eager man who was answering so fast he would interrupt me in the middle of the question and get it wrong,” Jennings recalls. That contestant was Holzhauer, who did not win the contest. “Apparently he has gotten much better in accuracy and speed since then.”

Aside from mutual admiration, Jennings and Holzhauer do have a lot in common. Both prepared for the show by watching reruns and making flash cards. They each honed their buzzer skills with household objects. (Jennings used a ring-stack toy and Holzhauer fashioned a mechanical pencil wrapped in masking tape.) Jennings has offered Holzhauer advice on dealing with sudden Jeopardy! fame. And both say they would be interested in facing off in a championship matchup.

“It’s fun to be king of the hill, but 15 years later, to be dethroned by a mind-boggling good player like James — that would be extremely flattering,” the reigning champ says.

“It takes a lot of guts” to play the game so differently, says Jennings, who says he doubts he could successfully adopt Holzhauer’s high-risk style. “I wager more conservatively, and I have no regrets. Playing to keep a lead is not a crazy strategy. James is better able to cope with the drama of seeing the big numbers come and go.”

Holzhauer’s success doesn’t mean his style is the only way to win. But he’s certainly making a strong case for it. And he’s eager to see whether future players will follow his strategy. “I would feel like a pioneer if there are imitators, and I find it more exciting to watch a game with big bets,” he says. “That said, there is a big difference between shouting ‘All in!’ from your couch and actually doing it on stage.” 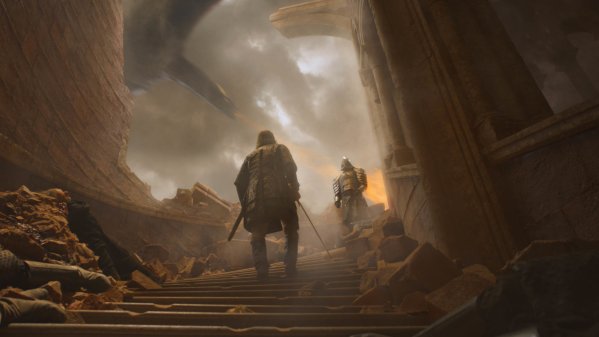 What Even Happened to the Mountain? What the Real History of Necromancy Tells Us
Next Up: Editor's Pick