Breast cancer treatments have come a long way in recent decades, but understanding how to prevent tumors from forming in the first place has been a major challenge.

In a new study being presented at the annual American Society of Clinical Oncology meeting in Chicago next month, researchers report intriguing evidence that a low-fat diet, similar to the kind doctors recommend for heart health, is also linked to a lower risk of dying from breast cancer.

The study analyzed data from the Women’s Health Initiative, a large trial sponsored by the National Institutes of Health that studies the health effects of hormone therapy, diet and certain supplements on the health of more than 160,000 postmenopausal women. In this trial, researchers led by Dr. Rowan Chlebowski, an investigator at LA Biomedical Research Institute at Harbor-UCLA Medical Center, focused on a group of nearly 49,000 women who were randomly assigned to follow either a low-fat diet or a control diet for 8.5 years. The low-fat diet group aimed to reduce their fat intake to 20% of their total daily calories and to increase the consumption of fruit, vegetables and grains. None of the women had breast cancer at the start of the study.

After the study ended, the rates of new breast cancers were about the same in the two groups, but women who were diagnosed with breast cancer in the interim had a 35% lower risk of dying from any cause compared to those on the control diet. Even 20 years after the study ended, the women who ate the low-fat diet continued to have a 15% lower mortality risk. And in the longer follow-up data, their risk of dying specifically from breast cancer was 21% lower than that of the women who didn’t change their diet.

“This is a very exciting result for us,” says Chlebowski. “Now we have randomized clinical trial evidence that dietary moderation, which is achievable by many, can have health benefits including reducing risk of death from breast cancer. That’s pretty good; it’s hard not to be happy about that.”

The study is the first to rigorously test a potential factor that could influence deaths from breast cancer. Earlier observational studies did not assign volunteers to specific diets but looked at cancer outcomes depending on what people, on their own, chose to eat. In this study, volunteers were provided with dietary guidelines to follow about what to eat. “Until this study, we lacked any data from a prospective randomized control trial, which is the gold standard, for showing that a dietary approach really does reduce the risk of dying from breast cancer,” says Dr. Neil Iyengar, a medical oncologist at Memorial Sloan Kettering Cancer Center, who was not involved in the study. “Many of us who are proponents of considering diet and exercise in the cancer treatment plan are excited by this trial data because it is the first to show in a very robust way that we can improve outcomes and prevent cancer-related deaths just by changing the diet.”

In a separate sub-study, the research team also showed that the longer women were on the modified diet, the lower their risk of death during the study period. The results should give doctors more confidence in considering diet when discussing treatment options with women who are diagnosed with breast cancer. While the study did not find a significant connection between dietary changes and the incidence of new breast cancer, the results do suggest that modifying the diet can lower a woman’s risk of dying from any cause, or from breast cancer, if she is diagnosed with the disease.

The reason for that, says Iyengar, may have to do with the diet’s “dose.” It’s possible, for example, that the effect of the dietary change is greater on tiny tumors in the breast tissue that are already established, although they aren’t robust enough yet to lead to a diagnosis of breast cancer. “The effect of this diet may be stronger in preventing the growth of already established tumors rather than preventing the development of tumors,” he says. “What this trial does is position us to take a deeper dive, now that we know we can effectively change the tumor or cancer behavior with diet.”

Chlebowski plans to dig deeper into the data to find out more about how diet is working to lower deaths from breast cancer. During the trial, women provided blood samples both at the start of the study and one year later, so he and his team may find factors that changed among the women on the diet compared to those on the control plan.

In the meantime, he hopes cancer doctors will talk about diet with their patients who might be at higher risk of developing breast cancer. Though not all women in the study were able to lower their fat intake to 20% of their daily calories,“these dietary changes are achievable by many,” he says. Even though not all of the women on the low-fat diet met the target, the study showed that the modifications still reduced risk of dying from any cause and from breast cancer. “It’s about taking smaller pieces of meat, and adding vegetables to the plate to balance things out,” he says. 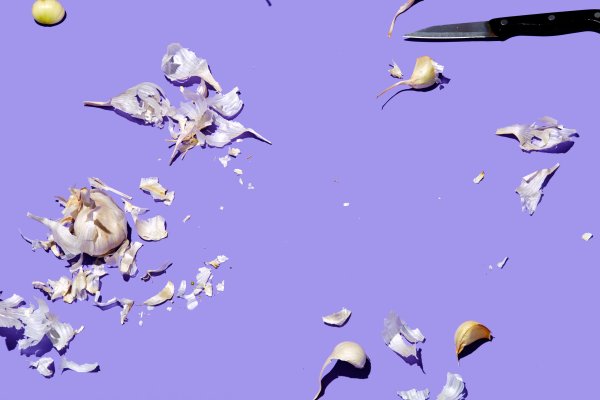 Are Onions and Garlic Healthy? Here's What Experts Say
Next Up: Editor's Pick