Exclusive: U.S. Military Officials Say There Is No Actual Plan to Confront Iran

The Trump Administration is turning up the heat on Iran, broadcasting a new plan to send as many as 120,000 U.S. forces to the Middle East to counter purported “identified, credible threats” from Iran.

But in the world of the Pentagon, there are plans you present to politicians, and then there are real plans. And three U.S. military officials involved in planning and overseeing military forces in the region tell TIME that no actual, executable plan, or anything like it, exists for a large-scale troop deployment to the Gulf.

“That requires knowing what contingency you’re addressing,” says one officer. “Is the target Iran’s own forces or is it a militia? Is the enemy in Iraq or Syria or someplace else? A car bomb or missiles or cyber? Is there credible evidence linking an attack to the Iranian government so that targets inside Iran are legitimate?” All three sources, who spoke on condition of anonymity because they had not been authorized to discuss the matter publicly, told TIME they had seen no such detailed data.

National Security Advisor John Bolton recently requested a plan for sending a substantial number of additional U.S. ground and air forces to the Persian Gulf, according to the three officials. On May 9, Acting Defense Secretary Patrick Shanahan presented him and other top national security officials with a preliminary outline of plans to deploy as many as 120,000 more Americans to the region, according to the officials, who were briefed on the meeting, which was first reported by the New York Times.

But deployments of even limited forces to deal with credible threats require what’s called a time-phased force and deployment list, or TPFDL. That list details what units are in position, what additional ones would be deployed or held in reserve, what equipment and supplies would be necessary, where the forces would embark and land, how they would move, and in what sequence.

The data making up a TPFDL for a major deployment can take months to refine, and the smallest details matter. When the U.S. was preparing to invade Iraq in 2003, for example, then-defense Secretary Donald Rumsfeld altered the data with the result that computers needed to keep track of arriving weaponry and supplies landed after the equipment they were supposed to track.

Once the data are refined, generating the TPFDL can take days. The list is then used to coordinate the air and sea lift capabilities necessary to deploy large numbers of troops and the material needed to support them. “Available sealift determines how much can deploy on a single passage, which affects speed of deployment,” says Gen. Eric Shinseki (ret.), who was Army Chief of Staff during the 2003 Iraq invasion. Each trip takes 22 to 23 days from the U.S. to the Gulf and the same amount of time back, Shinseki says, requiring potentially months to build up a large force in the region, once a plan is in place.

The Pentagon does maintain and update general plans for deploying troops anywhere around the globe — “probably including Canada,” says one of the officials. But existing plans prepared for possible confrontation with Iran by the U.S. Central Command, which runs combat missions in the region, do not call for the use of a major ground force to invade the country, said the three military officials, all of whom were briefed on them.

Instead, they said, any attack on Iran likely would involve a mix of air strikes using precision-guided munitions and cyberattacks to cripple the country’s electric grid, oil pipelines, communications, and financial system.

The likely first responder, said one of the officials, would not be the Army, Navy, Air Force or Marine Corps, but the U.S. Cyber Command, which conducts offensive operations using tools like the Stuxnet worm that attacked Iran’s uranium enrichment facilities in 2010.

Another indicator of how far from an actual deployment of forces the U.S. remains is how little work has been done to figure out where American soldiers, sailors, airmen, and Marines would be based. There has been no substantial outreach to nations such as Saudi Arabia, Qatar, and Kuwait about hosting 120,000 more U.S. forces, hundreds more aircraft, and potentially hundreds of tons of equipment, or about helping defray the costs involved, said two U.S. diplomats, who also requested anonymity to avoid White House ire.

Nor has there been an effort to assemble a new military coalition similar to the one the U.S. mustered to repel Iraqi forces from Kuwait in 1991, the two said. It’s not at all clear who might be willing to join such a coalition. “The Saudis and the UAE (United Arab Emirates) probably would throw in,” says one of the sources, but “you can forget the Europeans this time.”

Part of the reason for that is the paucity of evidence regarding the purported threat itself. Four American and allied intelligence officials say they have seen no dramatic increase in the threat posed by Iran or its allies or anything suggesting that the Islamic Republic is preparing to resume its pursuit of nuclear weapons.

Reports in recent days suggest Iran has loaded missiles onto boats in the Gulf. However, the intelligence analysts say such moves have been taken without efforts to conceal them from satellite and other surveillance, suggesting no effort on Iran’s part to launch a surprise attack.

If anything, the available information indicates that Iran’s government wants to avoid provoking an American attack or incurring additional international sanctions on its oil exports, according to one of the intelligence officials, who like the others requested anonymity to discuss matters about which they aren’t authorized to speak publicly.

That some U.S. allies find the evidence weak, at best, is evident. Spain this week withdrew a frigate that was part of a U.S.-led strike force in the Persian Gulf, and Federica Mogherini, the European Union foreign affairs chief, called for “maximum restraint” after she met in Brussels Monday with Secretary of State Mike Pompeo, who was unsuccessful in winning support for the Administration’s “maximum pressure” campaign against Iran.

A senior British military official told reporters at the Pentagon on Tuesday that he had seen no increase in the danger from Iran or Shiite militias in Iraq or Syria. “We are aware of their presence clearly and we monitor them along with a whole range of others because of the environment we are in,” said Maj. Gen. Chris Ghika, the deputy commander of the U.S.-led coalition fighting the remnants of the Islamic State in Iraq and Syria.

A few hours later, the United States Central Command fired back, saying Ghika’s comments are “counter to the identified credible threats available to intelligence from U.S. and allies regarding Iranian-backed forces in the region.”

Some allies and members of both parties in Congress worry that some Administration officials want conflict regardless of whether there is a plan to deploy troops or not.

All three U.S. military officials said they were mystified by the 120,000 number that has appeared in numerous news accounts. “It makes no sense,” said one of the officials. “It’s a fraction of what would be needed to invade Iran and far more than what would be required to take down a militia dumb enough to launch a major, traceable attack.”

The U.S. invaded Iraq, which is one quarter the size of Iran and has half the number of people, in 2003 with 145,000 troops. That force was too small to secure the country after its army and police forces were disbanded; at the time, Shinseki estimated that several hundred thousand troops would be needed to take Iraq, a recommendation the Bush Administration ignored.

Intentionally or not, President Trump added to the uncertainty on Tuesday, saying of the reports of new military planning: “I think it’s fake news. OK? Now would I do that? Absolutely. But we have not planned for that. Hopefully, we’re not gonna have to plan for that, and if we did that, we’d send a hell of a lot more troops than that.”

That apparently self-contradictory statement raised hopes of a split between the president and his hawkish National Security Advisor, John Bolton. In a series of tweets on Wednesday, Trump denied that there is any infighting over Middle East policy in his administration.

The politics favor the doves. While Iran’s support for militias and terrorist groups in Lebanon, Syria, Iraq, Yemen, the Gaza Strip and elsewhere is well-known, the Trump Administration is likely to have a difficult time mustering public and political support for new military action in the Mideast without producing concrete and convincing evidence of a major new Iranian threat.

“Bolton did the same with President George W. Bush and Iraq,” Rep. Seth Moulton, a Massachusetts Democrat who served in Iraq, said in a statement last week. “As someone sent four times to that misguided war, I have seen the costs of Bolton’s disastrous foreign policy in a way he never will — firsthand, and at the loss of thousands of American lives.”

But even if neither country wants a war, there is the danger of a miscalculation, Shinseki says. “Things could heat up quickly, even if it were intended merely as signaling and not as a direct threat,” he says, and “once that threshold is crossed, there’s no turning back.” 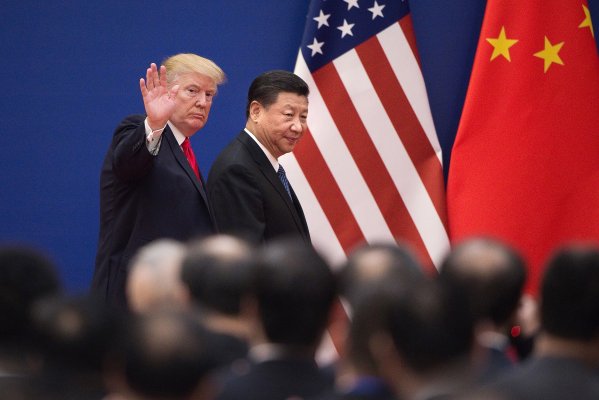 Trump and Xi Are Too Alike to Cut a Deal
Next Up: Editor's Pick