Too Often, Working Mothers Do Far More of the Childcare Than Their Husbands. Here’s How to Fix That

Getty Images
Ideas
By Darcy Lockman
Lockman, a clinical psychologist, is the author of All the Rage: Mothers, Fathers, and the Myth of Equal Partnership.

When my husband and I became parents a decade ago, it was with a vague understanding that the workload created by our children would be shared between us. Quite soon after our first daughter was born, though, I found myself in charge of the details of managing her needs. I watched this happen all around me. Before they had kids, women divided the domestic chores evenly with their husbands. And so they went into parenthood tacitly assuming that they would keep that balance — that their gender would not make them the default childcare laborer. Yet when the baby arrived and grew, they found themselves taking far more than an even share of the responsibility, work and sacrifice, while their husbands received more than their fair share of rewards. Like me, these women were angry.

As I dug into the family studies research and interviewed 50 mothers for my new book, I kept on asking myself: Why does this remain the case? Thirty years after sociologist Arlie Hochschild’s publication of The Second Shift, which chronicled the extra burdens of working women in the home, why weren’t employed women demanding more from their partners?

Pioneering Stanford-based family researchers Phil and Carolyn Cowan believe that a significant reason for this inequality is that women do not feel entitled to putting their own needs, comforts or ambitions first, in relation to their male partners. The Cowans call this phenomenon “unentitlement.” Often without being aware of it, women seem to feel they deserve to do most of the work simply on the basis of sex — and their children’s fathers seem to agree.

Being “entitled” gets a bad rap, but too little entitlement can leave a person wanting. Kyla, the mother of one-year-old Zoey in South Salem, New York, works from home with the help of a part-time babysitter. John, her husband, drives a short distance to his office. “In my mind there’s something about John physically going to work that warrants more of a break, so I feel less entitled to rest and relaxation,” Kyla told me. “I talk about this with my therapist all the time because it’s crazy for me to think this way. I’m working on client work in between taking care of Zoey all week and am just as exhausted.”

The interesting thing about this is that — without being conscious of it — many women feel it is fair and just that they handle more in the home. In 1994, sociologists Mary Clare Lennon and Sarah Rosenfield looked at the time diaries of working women and their husbands, as well as individual reports on both individuals’ feelings about the distribution of labor in their homes. They found that the men who performed 36% of their household’s labor reported the strongest feelings of fairness. But the women who were most likely to say the arrangements were fair expected men to do even less: their time diaries attested to the fact that they were doing 66% of their household’s labor. Lennon and Rosenfield wrote, “both women and men appear to believe that women should do about two-thirds of the household chores.”

This form of female unentitlement manifests wherever the sexes interact. In Still Failing at Fairness, educators David Sadker and Karen Zittleman observed that school-age girls take less opportunity than boys to raise their hands in class. In Girls & Sex, journalist Peggy Orenstein reported that adolescent to college-age girls often believe, or at very least behave, as if sex is exclusively about male pleasure. And in The Silent Sex, political scientists Christopher Karpowitz and Tali Mendelberg suggest that women in the public sphere feel less entitled not only to pay, but also to authority.

It’s hard not to suspect that considering less reward for greater sacrifice as fair is a façade. Social psychologists have a name for a similar, and connected, phenomenon: system justification. To avoid cognitive dissonance, groups that might otherwise feel unsatisfied with the status quo mitigate their dissatisfaction by coming to believe that they deserve their lot.

Lab experiments have shown that research participants randomly assigned to the lower-paid of two groups subsequently come to believe not that their group is being arbitrarily shortchanged, but rather that they are less competent.

It can be difficult to find one’s way out of this way of thinking. John Jost, a social psychologist and the father of system justification theory, told me, “In contrast to what is perhaps a ‘common sense’ notion that people will at the very least reject, if not rebel against, attitudes and circumstances that justify the oppression of their own group, research on system justification theory has uncovered myriad ways in which individuals internalize and even perpetuate beliefs that put themselves and their fellow groups members at a disadvantage.”

The gender psychologist Sandra Bem has written that women can empower themselves by taking their own preferences, goals and experiences seriously, and expecting their partners to take them seriously as well. Women must begin to see their own activities, Bem says, “as no less important and no less deserving of special consideration than those of the men in their lives.”

Though it’s not always so simple. Gretchen in Baltimore described to me how she puts her husband’s convenience first. “One night, I did what my husband often does to me. I told him I wouldn’t be there in the morning, and he’d have to get the kids ready then drive them to different schools, including our daughter’s preschool, which doesn’t open until nine, thus making him late, like I am every day. He looked at me like I was crazy, exhaled loudly, said nothing. Of course, I felt guilty. I got on the phone and found a friend’s house where he could drop our preschooler off.”

While she attempted to prioritize her professional needs, as soon as her husband expressed distress she felt the impulse to unburden him. Granted, she didn’t reneg on her work commitment (she’s a reporter), but she did go out of her way to make sure her partner’s desire not to be put out was accommodated, inconveniencing herself in the process. I heard this sort of thing a lot. Frankly, I do it myself.

The couples who navigate workload equality the best, I’ve found, don’t just understand that our culture’s biases — and frankly, its baked-in sexism — result in most of the family management defaulting to the mother, but also decide as a couple that they do not want that to happen. They stay on top of parity. If one or the other feels overburdened, they sit down to recalibrate.

In studies, spouses aspiring to equal parenting express awareness about gender politics, share dual commitments to work and family, and feel poorly served by traditional gender roles. They try to reach their goals through actively negotiating family life, questioning gendered entitlements, developing new competencies, and paying mutual attention to family tasks. Equality is not as much an end point as a process.

Elizabeth, a 32-year-old new mother in northern California who got interested in work-family balance during her college years, told me about how she and her husband make this happen. Elizabeth started graduate school during a period when her husband was traveling a lot for work. She began taking more care of the home, and addressed it with him post haste — well before they had children. “That’s how it starts. It’s the pattern we read about, the woman happens to be at home more and so more household things start falling to her,” she told me. “Neither of us wanted that. I thought we should create an Excel spreadsheet to divide the chores. He wanted it to be more organic.” There was no simple solution — aside from constantly seeking solutions. “We both kept starting that conversation often. And then before we had our daughter, we had the same level of thinking about it. Who was going to take how much time off, what we were going to do about childcare, who will do drop off, who will do pick up. It was just a constant conversation about the nitty gritty of it.”

Elizabeth has watched close friends fall into the trap so many of us do, often with the same rationale: They’ll fix it later. For instance, one couple she knows and cares about decided when the mother started breastfeeding to not sleep train their child, and because the father worked nights, she took on the responsibility of waking up at night with the baby. “Once you do that, it’s really hard to get back to, ‘We’re equally responsible, and we really have to watch out for each other’s needs,’” Elizabeth says. She’s skeptical of the husband’s promises that, once a tough stretch at work ends, he’ll do more. “I just think you cannot say, ‘It will be different later.’ You have to do it when it’s hard, because it’s always going to be hard.”

For many of us, it may feel like we’re too late. Having had this conversation with Elizabeth and others, I realized where my husband and I had gone wrong. We never once sat each other down to declare our mutual commitment to sharing — we mostly just want to be equals. Having not made this an unambiguous team objective from the get go, my anger left us at odds with each other rather than simply placidly renegotiating to meet a mutual goal.

And that goal must ultimately be mutual. The women I interviewed had a hard time getting their partners to take their concerns seriously enough to make change. Yet men might be well-served by listening: women who feel the division of labor in their partnerships is just are 45% more likely than others to report that their marriages are “very happy.” What might happen — to women, to men, to marriages, to society — if mothers felt less conflicted around having their needs met? I don’t know for sure. But at the very least, mothers are entitled to begin this conversation. 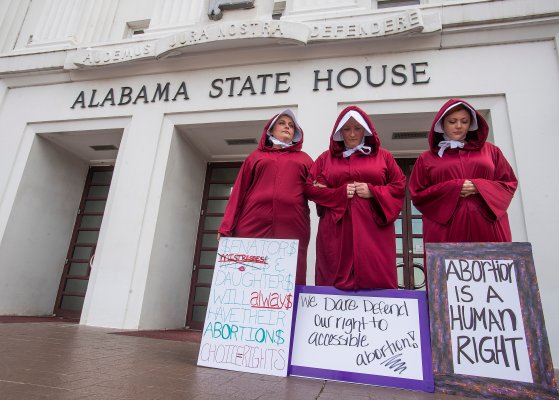 Alabama's Abortion Law Won't Change Anything — But Only Because the Reality Was Already Bad
Next Up: Editor's Pick