Justice John Paul Stevens in his chambers at the Supreme Court in Washington, on April 15, 2014.
Doug Mills—The New York Times/Redux
By Tessa Berenson

Editor’s note: Retired Justice John Paul Stevens died on Tuesday, July 16 at his home in Florida following a stroke. He was 99.

John Paul Stevens turned 99 years old in April, but the former Supreme Court justice isn’t stepping back from the public eye just yet.

In his new memoir The Making of a Justice: Reflections on My First 94 Years, which comes out Tuesday and runs more than 500 pages, Stevens writes about matters both personal and political. He recounts tales ranging from his Navy service during World War II to throwing out a first pitch for his beloved Chicago Cubs to his desperate efforts to stop the Supreme Court from recognizing an individual right to bear arms in 2008’s landmark District of Columbia v. Heller decision, which he called the court’s gravest error in his 34 years on the bench.

“The tragedies are multiplying one after another,” Stevens told TIME, referencing recent mass shootings.

Stevens spoke to TIME by phone in May. Below is a transcript of the interview, which has been lightly edited and condensed for clarity.

TIME: You believe that District of Columbia v. Heller, which held that the Second Amendment protected an individual’s right to bear arms — and from which you dissented — was the worst decision the court made during your tenure. Why is that?

Stevens: It’s quite wrong on the merits. But beyond that, it seemed to me quite outrageous to depart from a settled rule of law. As history has demonstrated in recent years, the tragedies are multiplying one after another. And the decision of the court in Heller has contributed to that.

Are there any decisions you personally regret?

One of the death-penalty cases in my first year on the court. We should have put [the statute in that case] in the group of mandatory death-penalty statues that we held unconstitutional. So, I think I got that wrong.

You write in your memoir that when you arrived in Washington in 1951, “the members of the two parties respected one another and cooperated.” Is something broken in Washington today?

It’s much more adversarial. I think maybe the people in elected positions are more interested in preserving their jobs than in doing the best job possible.

You claim that the introduction of television had an impact on the confirmation process. How so?

My hearings were not televised, and on the first morning, five minutes after I’d been introduced, they started asking questions. Now the first day is consumed by statements by the Senators about how important the hearings are.

Should oral arguments at the Supreme Court be televised?

That’s a very difficult question, and I have been close to both sides of it. But I still think the procedure works more effectively without television.

You write that Clarence Thomas’ views on the Constitution were more important to you during his hearings than the controversy over Anita Hill’s allegations of sexual misconduct. Do you feel the same way about Brett Kavanaugh and Christine Blasey Ford?

I think in both cases, the quality of their judicial work is far more important than the other issues.

In the book you write that when the Supreme Court unanimously decided in 1974 that President Nixon’s executive privilege claim didn’t protect him from turning over his White House tapes, it was the high point in the nation’s respect for its independent judiciary. Do you think that independence, or at least the public perception of it, has been eroded under President Trump?

I don’t know particularly by President Trump, but I do think that was the high point, which means that nothing has happened since then that equals the importance of that particular case.

What do you think of the idea bouncing around in the 2020 Democratic primary to expand the Supreme Court?

I’m not in favor. I think in the long run, the number nine is correct.

You used to have your pilot’s license and wrote that you’d always wished you’d flown President Ford.

I still have the license. I guess I quit sometime before I retired. I really think if I had the guts to ask him, he might have accepted.

You joke that throwing out a first pitch at a Cubs game in 2005 was the high point of your career. How do you think the Cubs are looking this season?

They’re not as good as their potential. But they’ll come back.

You had an agreement with Justice David Souter that he would let you know honestly when you had declined mentally and should retire. Should Supreme Court Justices have term limits?

No. I’ve always thought they’re able to work it out for themselves.

If you had served three more days, you would have tied Justice Stephen Johnson Field’s record for the second-longest serving Justice. Do you wish you’d stayed on?

No, it’s not a particularly interesting achievement. And, Justice Field stopped working full-time a couple months before he retired, so maybe I should be put in second place.

What advice do you have for the newest justices Kavanaugh and Neil Gorsuch, who are just starting out their Supreme Court careers?

I think they should do their very best to understand the arguments on both sides, and just do the job they had done well as Court of Appeals judges, and I think they’ll get along OK.

This book took you years to write. What are you looking forward to doing now that it’s finally out?

I do a lot of reading and have a number of things to do that keep me busy.

Have you read any good books recently?

Yes, I’ve read [John] Kerry’s autobiography, and the book about Justice O’Connor, and Mrs. Obama’s book, which is a wonderful book. There continue to be good books to read and I continue to try to find the best.

I better wait and see. I’ll face that question when it’s a little closer. 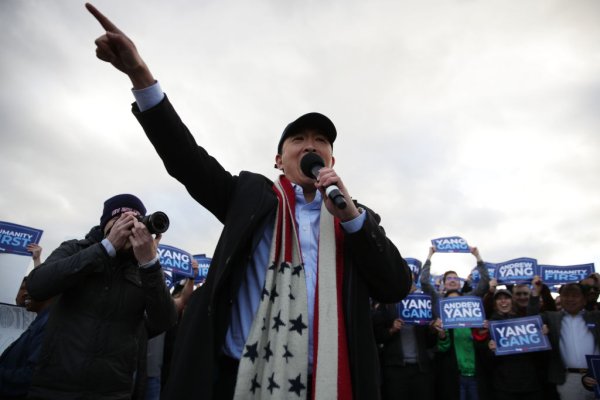 How Andrew Yang's Online Following Has Turned Into a Real-Life Coalition
Next Up: Editor's Pick