'We Are People, Not a Statement.' Students Walk Out of Vigil for Colorado School Shooting Victims

Students hold up their phones after leaving a candlelight vigil at Highlands Ranch High School on May 8, 2019.
Michael Ciaglo—Getty Images
By Jamie Ducharme

A protest broke out at a vigil Wednesday for victims and survivors of the shooting at STEM School Highlands Ranch, with some students reportedly walking out because of what they called politicization of their grief.

Students from STEM School, as well as politicians, activists and other community members, attended the vigil at nearby Highlands Ranch High School, outside Denver. The vigil was meant to support survivors and honor 18-year-old Kendrick Castillo, the student who died in Tuesday’s shooting while apparently trying to diffuse the situation, the Denver Post reports. Eight other students were wounded. Two students, an 18-year-old and a 16-year-old, are in custody.

But after multiple speakers — including Colorado Sen. Michael Bennet and Rep. Jason Crow, both Democrats — addressed the crowd, STEM students began to complain that they had not been allowed to speak, according to local media reports.

“Let STEM kids speak!” one voice called from the audience, according to the Highlands Ranch Herald. Shortly thereafter, according to the Herald, students began to leave the vigil and move into the hallway to speak with event organizers.

From there, things devolved. A woman, who the Herald says identified herself only as “a mother,” approached the microphone and said STEM students had been told by the media to leave — though it was not clear why she thought so — prompting more of the crowd to leave the gymnasium and some to engage in anti-media chants. Chants about the need for better mental health resources also rang out, as students protested the political nature of the event.

“Don’t use Kendrick’s name for political reasons!” a student outside the vigil shouted, according to the Herald.

Eventually, STEM students and other audience members returned to the vigil, and some approached the podium to speak. Some complained about the political overtones of the event, while others emphasized that the vigil was meant to honor Castillo, 9 News reports.

“What has happened at STEM is awful, but it’s not a statistic,” one student said. “We can’t be used for a reason for gun control. We are people, not a statement.”

One boy also noted that STEM students had not been asked to leave the vigil.

“We wanted Kendrick to be mourned. We wanted all of you to join us in that mourning, but that was not allowed here,” he said. “We all walked out. We were not kicked out, despite what you have heard. We are back now to tell you that we love Kendrick, and we love all of the survivors.”

After STEM students returned to the gym, the vigil continued until about 9 p.m., the Post reports. Several students also spoke with reporters after the event ended.

“I think I speak for STEM when I say we do thank Highlands Ranch High School for hosting this,” STEM School senior Logan Griffith told the Herald. “However, this was for Kendrick Castillo. Not for our senator, not for anyone else.”

Gun control group Brady, which organized the vigil, on Thursday issued an apology, saying it “is deeply sorry any part of this vigil did not provide the support, caring and sense of community we sought to foster and facilitate,” according to the Associated Press. 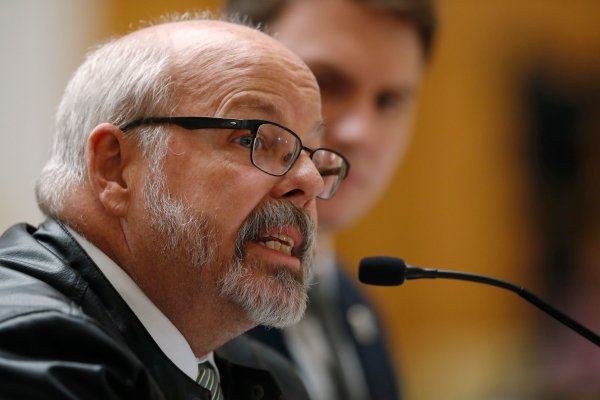