Representative Elise Stefanik can pinpoint the moment that crystallized the issue for her: It was the week after the midterm elections, and the newly elected members of the House of Representatives lined up for a photo. Representing the Democratic side of the aisle were more than 30 women. On the GOP side were two–Carol Miller of West Virginia and Young Kim of California.

Stefanik knew what could have been. “I recruited over 100 women,” she says, reflecting on her time as recruitment chair for the National Republican Congressional Committee (NRCC). But looking at the freshmen on the Capitol steps, she saw whom her party was welcoming in 2019: almost all white men. And within days, mail-in ballots showed that Kim had actually lost, bringing the grand total for House GOP freshmen women to one.

“That was a stark, stark wake-up call,” Stefanik says. She stood up at a meeting with her fellow House Republicans shortly after the election. “‘Take a look around,'” she recalls telling them in the basement of the Capitol. “‘This is not reflective of the American public. And you need to do something about it.'”

She wasn’t willing to wait. As we sit in her office on Capitol Hill, the topic is E-PAC, the political action committee she officially relaunched in January to focus solely on recruiting women and helping them win. Her initial aim was to raise $100,000; as of April 1, according to a spokesperson, she had raised over $285,000. Her office declined to provide a set number of women she intends to recruit beyond expressing a desire to exceed last cycle’s 100.

Stefanik’s determination is clear: Prominent among the mementos from her upstate New York district is a black and gold plaque. it CAN be done, it reads. It’s the same quote President Reagan kept on his desk in the Oval Office. “I can’t tell you how many times I am the only woman at a table,” she says. “I want more to have a seat at the table.”

Stefanik, 34, rose to prominence in 2014, when she became the youngest woman ever elected to Congress, a feat since eclipsed by two arriving Democrats. But she never planned to make gender parity her project. “I wasn’t running because of a lack of women’s leadership,” she says. “I ran because, just in general, I felt the party needed a new voice, a new generation of leadership, and my district needed someone more energetic to bring results.”

Raised in the greater Albany area, she became interested in a career in politics as an undergraduate at Harvard while working as a student liaison for John F. Kennedy adviser Ted Sorensen, who was a fellow there. Although they had different political views, the experience was formative enough for her to eschew the consulting and finance jobs most of her classmates were pursuing. Instead, she headed to Washington, where she worked as a policy adviser in the George W. Bush White House.

In 2012 she worked on Mitt Romney’s presidential campaign, managing the debate preparation of his vice-presidential pick, Paul Ryan. At the time, Ryan was a Congressman in his early 40s who, after being elected at 29, had ascended the party ranks to chair the House Budget Committee. “It really struck me that as a young person, as a rank-and-file member of Congress who was elected in his late 20s, he was able to shape a lot of the national discourse because he had the courage to put forth new ideas,” she says. “He talked about issues like debt from a generational perspective.” Her work with Ryan made her confident that she too could offer a different way of thinking, and she moved back to New York to run in the 21st District.

In the tough primary that followed, she had support from Ryan as well as female Republicans she now considers mentors, like Representative Ann Wagner and then Representative Diane Black. She also benefited from roughly $1 million in funding from American Crossroads, the super PAC backed by former George W. Bush adviser Karl Rove. But she says many members of Congress, including the NRCC leadership, were “tepid” about her candidacy. “There was a knee-jerk reaction that I didn’t fit the mold of a typical congressional candidate,” she says. She won anyway.

For her first two terms, Stefanik mostly kept her head down, forgoing national media appearances and focusing primarily on legislative priorities that would directly benefit her district. Although she’s bucked her party several times on policy, most notably on tax reform and climate change, in recent months she seems even less willing to accept the status quo. When Representative Tom Emmer, who now chairs the NRCC, said she would be making a mistake endorsing candidates in the primaries–something the NRCC pointedly does not do–but that she could do what she wanted, she fired back with a tweet containing four siren emojis: “But NEWSFLASH I wasn’t asking for permission.”

The two are now on good terms, she says, and Emmer appeared onstage for her PAC’s kickoff event. “When Elise talks, people listen,” says Representative Susan Brooks, the new NRCC recruitment chair. Asked if the party would be focused on increasing diversity if not for Stefanik, Brooks pauses and chuckles. “She did light the fire,” she says. “We might have studied it longer, reflected longer, griped about it longer … but she, quickly after we lost, stepped up.”

To usher more women into office, Stefanik plans to not only recruit them but also help them develop into viable candidates. She’s laid out a set of metrics they must meet to receive the PAC’s support, like reaching a fundraising threshold and building a basic campaign infrastructure. Although Stefanik won’t announce her first slate until the fall, her spokesperson said the PAC has given the maximum allowable contribution to Kim, who is running again, as well as Nicole Malliotakis in New York, Karen Handel in Georgia and Joan Perry in North Carolina. Being a Republican woman seeking a House seat isn’t enough, Stefanik says. She’s looking for “women we can help get across the finish line.”

She’s heard the criticism: Isn’t she engaging in the identity politics that conservatives so often object to? “That’s a pushback I’m getting,” she says. “I think identity politics is a very outdated term.” As she explains it, she just wants elected officials to better reflect the voters. “I think the Democrats were strategic in putting up district-specific candidates that would resonate in different parts of the country, whether it’s urban areas, whether it’s people that have interesting narratives with a national-security background or interesting perspectives as working mothers,” she says. “We need to recognize we should be doing that as well.”

She’s not calling for a reassessment of the party’s principles. She simply believes that female officials, whether from “ruby red” or swing districts, can bring a fresh perspective to tackling the issues affecting American families and women specifically. She points to the gender pay gap as one example. Democrats, she says, have put forward the Paycheck Fairness Act for decades. But the day before we spoke, she proposed her own plan to combat the problem: the Wage Equity Act, which attempts to balance the interests of businesses and employees. “It’s not a surprise that came from a female member who wanted to think differently about how we [fix] this problem,” she says.

Stefanik knows it will likely take time to see a real shift in the breakdown of her party’s Representatives. But she doesn’t intend to shy away from the challenge. If she does her job right, the next freshman class will look very different. 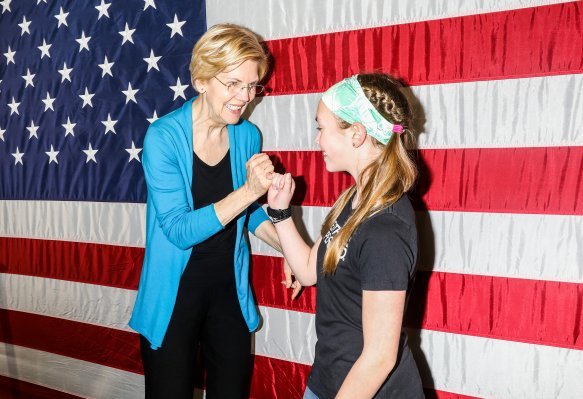 'I Have a Plan For That.' Elizabeth Warren Is Betting That Americans Are Ready for Her Big Ideas
Next Up: Editor's Pick