The World’s Most Consumed Alcohol Is One You Might Not Have Tried. But It's Coming to a Bar Near You

“You’re going to drink a little more than you like, and you can’t refuse,” the late Anthony Bourdain told his co-star Eric Ripert when they ventured to China’s Sichuan Province on his Parts Unknown television show.

Bourdain’s statement perfectly expresses the Chinese style of drinking, and at the center of the country’s drinking culture is the national drink baijiu, or “clear liquor.”

The potent grain-based spirit has been produced for thousands of years in China and is much stronger than most Western spirits, typically coming in at between 40% and 60% alcohol by volume. (Whisky or vodka, by comparison, are around 40%). It’s not sipped the way a fine single malt might be. Instead, shots of baijiu are taken neat during meals. If a toast is made, which happens often during dinners in China, it can be considered gauche not to throw back a slug of baijiu, tequila style.

Baijiu’s popularity in the country of 1.4 billion people makes it the world’s most consumed spirit—10.8 billion liters were sold in 2017, according to an analysis by the International Wines and Spirits Record (IWSR). But outside of China it is not well known and many of those who have tried it consider its taste an acquired one. Normally made from sorghum, the drink is fermented with a naturally harvested yeast and the same microorganism culture that is used to ferment soy sauce and rice vinegar. Indeed, one variety is called “sauce baijiu” because of its savory, umami-like flavors. Other styles are more appealing to non-Chinese palates, coming in fruity, light and sometimes sweet versions.

“Most people taste baijiu for the first time, the flavors are unfamiliar to them—it’s easy to write off it off and assume there’s something wrong with the drink,” says Derek Sandhaus, author of the first English language book on the beverage, Baijiu: The Essential Guide to Chinese Spirits.

A few businesses are trying to change that perception, however, and with it baijiu’s global appeal. One such outfit is Ming River, of which Sandhaus is a cofounder. It’s a venture between one of China’s oldest baijiu distilleries and a group of expatriate enthusiasts of the drink, who ran a baijiu bar in Beijing that was popular with both foreigners and locals. The bar came to the attention of Luzhou Laojiao—a state-owned in distillery in Sichuan, where baijiu is said to originate—and the firm approached them for help in getting into the American market.

Ming River is not alone in its quest. A Portland family has been making baijiu for more than seven generations, bringing their baijiu recipe with them with when they emigrated to the U.S. from Vietnam in 1979. The family’s patriarch, Phan Ly, began distilling the spirit at home. When he retired from the family restaurant business, he decided to start a proper distillery. Today the Vinn Distillery is the U.S.’s only domestic baijiu distillery. Ly’s five children took over the running of it when he passed away in 2012.

“When we first introduced baijiu to the consumers here in Portland it was rough going because we came to quickly realize that no one knew what baijiu was,” Michelle Ly, one of the children, tells TIME.

To make the drink more approachable, she says Vinn Distillery reduced the potency of its signature bottling to 40% alcohol by volume, a level similar to vodka, and notes that the attitude toward the drink has slowly begun to shift.

“I think it has a lot to do with where craft spirit is today. People are much more embracing of spirits that taste different.”

Ming River is hoping to capitalize on this new receptivity. The brand’s founders are working with U.S. restaurants specializing in regional Chinese cuisine to create food pairings. They are also encouraging bartenders to come up with creative cocktail recipes.

Cocktails made with Ming River baijiu are seen at an event in Brooklyn, New York City, on June 13, 2018.

H. Joseph Ehrmann, proprietor of the San Francisco bar Elixir, tells TIME that when he first encountered the drink he did not know what to do with it, but his bar now serves it in highballs, sours and punches—albeit with a word of warning.

“You wouldn’t tell someone to drink an ounce of hot sauce or pickle brine without explaining what they are getting into. It’s kind of like that,” Ehrmann says. “But bartenders and customers alike are starting to get into it as a shot, just as they have in the past with other flavors that were new to them, like Fernet or mezcal,” he says, respectively referring to the aromatic Italian spirit and agave liquor.

It’s still early days. Products from Vinn Distillery are only found in five states and drinks featuring Ming River are on the cocktail lists of not more than 65 bars and restaurants across the U.S., so far mostly in New York and California. (It’s also available in some European cities.) If you’re looking for it on store shelves, you’ll need to track it down in hipster enclaves like Brooklyn.

Read More: A ‘Clean’ Chinese Food Restaurant in New York Is the Latest Flashpoint in a Debate Over Cultural Appropriation

Nevertheless, there is optimism among its devotees that baijiu’s appeal will grow. Amelie Kang, the cofounder of a popular Sichuan restaurant called MaLa Project, which has two locations in Manhattan, says she plans to put Ming River on her menu in the coming weeks, both as a straight drink and in cocktails with ingredients like passionfruit puree and osmanthus syrup.

Kang drank baijiu in her native China, but she says never really appreciated it until she moved in New York and missed the drink from home.

“I thought it was a grandpa and dad’s drink,” Kang tells TIME, adding that baijiu is going through a reinvention. Brands in China are trying to appeal to younger audiences, she explains, using trendy packaging and releasing versions of the drink that are supposed to be added to cold tea—a popular cocktail mixer.

Some experts say that the fiery drink has a long way to go before it makes an impact on happy hour.

“A lot still needs to be done to educate [American drinkers] about the category—its history, where and how it is made and from what ingredients. They also need to be exposed to it and develop a taste for it,” Tommy Keeling, Asia-Pacific research director at IWSR, tells TIME.

“It’s encouraging to see that some companies are trying, but it is likely to remain niche for a long time,” Keeling says.

But both Ly and Sandhaus are convinced that the spirit will continue to gain a following in U.S. and elsewhere. “I don’t think all Americans are ready for baijiu, but I think enough of them are ready,” Sandhaus says. “There are enough consumers who aren’t put off by it—who are, in fact, ready for new experiences and new flavors.” 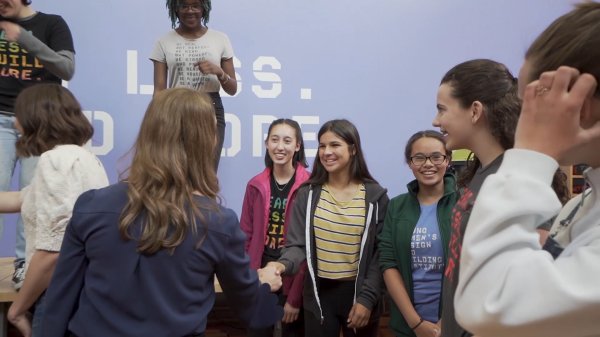 Melinda Gates Wants More Girls and Women in STEM. Here's How She's Working Toward That.
Next Up: Editor's Pick