The Release of Reuters Journalists in Myanmar Is a Victory for Press Freedom. But the War on Truth Isn't Over

The two figures were first spotted by a photographer who arrived early on the scene, with a telephoto lens through the gates of a Yangon prison on May 7. One man’s signature thick-rimmed glasses confirmed it: The award-winning Reuters journalists whose arrest had become a global cause were finally free.

In the 511 days since their arrest, Wa Lone, 33, and Kyaw Soe Oo, 29, had become two of the world’s most visible symbols of the fight to protect press freedom. Last year, TIME included them among the “Guardians” named Person of the Year for their role fighting the “war on truth.” In April, they were awarded a Pulitzer Prize for the very work that landed them in jail.

There was little ambiguity about what happened to these two bright young reporters who dared to expose atrocities committed by their country’s notorious military. They were set up, convicted of possessing “official secrets” and sentenced to 7 years in prison after a trial broadly considered a farce. On Tuesday, they were freed by a pardon from Myanmar President Win Myint.

“I’m really happy and excited to see my family and my colleagues,” Wa Lone said in brief remarks outside the prison gates. “I can’t wait to go to my newsroom.” Photos and videos of the reporters’ emotional reunion with their wives and young daughters went viral. One captured the first time Wa Lone ever held his infant daughter as a free man. His wife, Pan Ei Mon, discovered she was pregnant shortly after his arrest.

Like most good news in Myanmar, it came with a caveat. Their case was a major test of the country’s quasi-civilian government, led by Nobel laureate Aung San Suu Kyi, which it failed at every turn. Rights advocates say press freedom in the country is even worse than it was upon their arrest, and other journalists have already taken on board the chilling message that if they report critically on the military, the government won’t help them. “The military punished these journalists to intimidate others,” says Phil Robertson, deputy director of the Asia division for Human Rights Watch. “They wanted to let everyone know that, ‘Hey, we can come after you, too.’”

At every turn, the case set off alarm bells for other journalists. In what appears to have been a sting operation, Wa Lone and Kyaw Soe Oo were arrested on the night of Dec. 12, 2017 after accepting an invitation to have dinner with police at a private restaurant in Yangon. They were in the midst of a damning investigation into a massacre of 10 Rohingya boys and men in Myanmar’s Rakhine state, where the military has been accused of genocide against the stateless Muslim minority. Police handed them some documents, and they left the restaurant. Before they could even examine the contents, they were arrested and held incommunicado for about a week.

In the ensuing trial, Wa Lone and Kyaw Soe Oo were charged with breaking a law called the “Official Secrets Act,” a colonial-era provision that criminalizes so much as intending to share anything authorities want to conceal. A police witness testified that officers were ordered to “trap” Wa Lone, and that the both of them were caught in a “set up.” Nonetheless, they were convicted on Sept. 3, 2018, and sentenced to seven years behind bars.

It’s no wonder why authorities wanted to hide what these reporters knew about Rakhine. While they were still on trial, Reuters editor-in-chief Stephen J. Adler decided that the story of the massacre they had uncovered was too important not to publish. The rest of the world agreed with him; in April, Reuters’ body of work on the Rohingya crisis was awarded the Pulitzer Prize for international reporting. “We felt the world needed to see this story,” Adler told Washington Post columnist Jason Rezaian, who himself was jailed in Iran for 544 days and has been a vocal advocate for the Reuters journalists. “Our reporters in prison were fully supportive of the decision,” Adler said. “And this is what we do.”

It’s tempting to see the release of these reporters as a victory in the worsening global struggle between independent media outlets and the governments who wish to control and stifle them. At least 251 journalists were jailed in 2018, one of the worst annual totals on record. But advocates for the two men say this is a battle won, not the war. It’s generally agreed that the Myanmar government would not have freed them on its own; it took 18 months of sustained, concerted international pressure to get two innocent men out of prison, while scores of other journalists there and across Asia remain behind bars. “I don’t think the government of Myanmar deserves any credit for this, they’re still the villains,” says Robertson, of Human Rights Watch. “But what it shows is that if you can generate enough international pressure, you can actually win the day.” 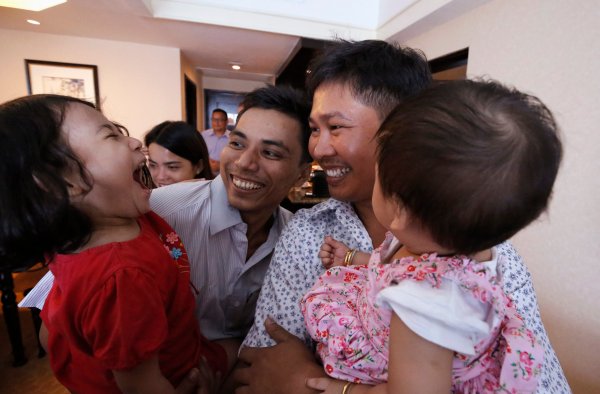 Joy, Applause as Reuters Reporters Freed From Myanmar Prison
Next Up: Editor's Pick