Democrats Are No Longer Afraid of a Trillion-Dollar Price Tag. Here's Why

When the Obama Administration set out to design a stimulus to stop the economy from a freefall in 2009, word came back from Republican and Democratic moderates in Congress that it couldn’t exceed $800 billion.

That didn’t stop many of its conservative critics from decrying the plan as a “trillion-dollar stimulus.”

But as Democratic contenders gear up for the 2020 primary, they no longer seem afraid of the trillion-dollar price tag. In fact, several major candidates are leaning into it with proposals that tout the dollar sign as a marker of seriousness.

Even some of the generic Democratic plans have trillion-dollar price tags. The Center for American Progress, a liberal think tank, has proposals for expanding Medicare and improving infrastructure that cost at least $1 trillion.

(Note that these plans count spending over as much as a 10-year period.)

“Trillion is the new billion,” joked Jared Bernstein, a senior fellow at the Center on Budget and Policy Priorities, a progressive think tank.

Asked for a comment about the proposals, Erin Perrine, deputy communications director for the Trump campaign, said only, “Socialism is expensive.”

Here’s a closer look at the major reasons why Democrats are touting trillion-dollar plans.

America has a few trillion-dollar problems

ctivist groups and concerned citizens held a rally at Foley Square and then marched to New York City Hall in protest of Trumps attack on the Paris climate agreement on June 1, 2017.
Erik McGregor—Pacific Press/LightRocket/Getty Images A

The issues Democrats are discussing have some pretty big costs associated with them.

Americans owe a total of more than $1.5 trillion in student loans. A report from the U.N. Intergovernmental Panel on Climate Change estimates that the world should spend about $2.4 trillion per year on clean energy between now and 2035 to avoid the most catastrophic effects of climate change. And the American Society of Civil Engineers estimates that the U.S. needs to spend $4.5 trillion by 2025 to improve roads, bridges, dams, airports and schools, among other things.

Given those estimates, plans to spend a trillion dollars erasing student debt, improving infrastructure and fighting climate change are arguably on the low end. And some experts argue that the candidates will do better by putting forward a plan that seriously addresses them.

“Ambitious plans are going to have ambitious price tags,” said Mark Schmitt, director of the political reform program at the New America Foundation. “They’re going to get bashed exactly the same no matter what. If you came up with a health care plan that cost a mere $50 billion, it would get beat up in exactly the same way, so you might as well get it out there now.”

Donald Trump had a trillion-dollar plan in 2016

Republican Presidential candidate Donald Trump models a hard hat in support of the miners during his rally at the Charleston Civic Center on May 5, 2016 in Charleston, West Virginia.
Mark Lyons—Getty Images

Former Secretary of State Hillary Clinton had a typical Democratic pitch in 2016: a $275 billion infrastructure plan over five years to fix roads, bridges, airports and water systems. “We’re going to have the biggest infrastructure investment program since World War II,” she told rally-goers.

But Trump had a plan nearly four times as large: $1 trillion on infrastructure. “Her number is a fraction of what we’re talking about. We need much more money to rebuild our infrastructure,” he told Fox Business Network.

Fiscal conservatives weren’t big fans of Trump’s plan. After the election Senate Majority Leader Mitch McConnell warned him against trying to pass a “trillion-dollar stimulus,” but Trump insisted he need to “prime the pump” and influential advisers like Steve Bannon argued that low interest rates meant it was “the greatest opportunity to rebuild everything. Shipyards, ironworks, get them all jacked up.”

Trump’s infrastructure plan has stalled repeatedly, but he’s never backed down from the idea. In a recent meeting with Democratic leaders in Congress, he even agreed in principle to $2 trillion in infrastructure spending.

Whether or not Trump succeeds in getting a plan that large through Congress, he’s raised the bar on how much a candidate can promise to spend and shown that, at least for a Republican candidate, the number alone is not disqualifying.

Bernstein, who was chief economic adviser to Vice President Joe Biden during the Obama Administration, recalled some of the internal debate over the stimulus was about keeping it below a trillion dollars.

“There was a sense that keeping it below a trillion was a political reality,” he said. “We can argue about whether that was right or wrong, but it certainly wouldn’t be the case right now.”

President Donald Trump signs the Tax Cut and Reform Bill in the Oval Office at The White House on Dec. 22, 2017.
Brendan Smialowski—AFP/Getty Images

Trump may not have gotten a trillion dollars in spending approved, but he did sign into law a $1.5 trillion tax cut. But while the Tax Cuts and Jobs Act cut individual income taxes for about two-thirds of households, according to the Tax Policy Center, polls have consistently shown that Americans don’t see it that way, and the law remains unpopular.

The law increased the deficit as well. A recent analysis by the Tax Foundation based on data from the first year of the Trump tax cuts projected that they will end up adding $900 billion to federal deficits over 10 years.

That has given a boost to Democrats seeking to spend more on their issues in several ways. First, it reinforces the idea that a trillion dollars is a reasonable amount of money for a presidential proposal. Second, it makes it easier for Democrats to pay for their ideas, since they can simply pledge to roll back some of the unpopular Trump tax cuts that benefited the wealthy. And third, it offers a counter to traditional conservative arguments about adding to the deficit.

“He defanged the Republican Party’s scolding about government spending and deficits,” says Jesse Lee, a spokesman for the Center for American Progress Action Fund. “There is nothing that Democrats are proposing that would be remotely in line with the amount of added deficits [from the Trump tax cuts] compared to the minuscule amount of benefits.”

Bernstein agreed. “Not every trillion-dollar idea is any good,” he said.

With Brian Bennett in Washington 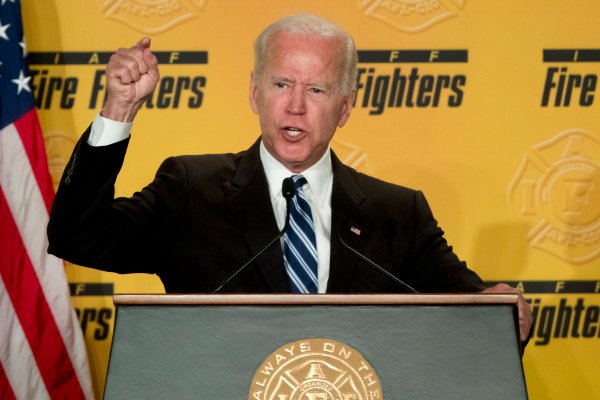 Is Trump Scared of Joe Biden?
Next Up: Editor's Pick