Two Reuters journalists imprisoned in Myanmar for reporting on a military crackdown on Rohingya Muslims have been released after spending more than 500 days behind bars.

The pair were freed as part of an amnesty of 6,250 prisoners by President Win Myint, according to Reuters. Authorities have historically released prisoners close to the date of the country’s new year, which began in mid-April.

The men were reunited with their families shortly after leaving prison. Wa Lone’s wife, Pan Ei Moon, discovered she was pregnant after her husband was arrested. He has met his young daughter only a few times, when she visited him in jail. Kyaw Soe Oo has a three-year-old daughter.

The two men were arrested in December 2017 and later sentenced to seven years in prison for possessing “state secrets” in what was widely believed to be a set-up. The journalists had been reporting on violence in the country’s western Rakhine State, where Myanmar’s state security forces have been accused of ethnic cleansing and possible genocide against the Rohingya Muslim minority.

Reuters’ investigation, published in February 2018, documented the slaughter and mass burial of 10 Rohingya men in the village of Inn Din. About 1.2 million Rohyinga were estimated to live in Myanmar before the country’s military launched a brutal crackdown on the mostly-stateless ethnic minority in response to attacks on border patrols by suspected Rohingya insurgents in August 2017.

The violence drove more than 700,000 people across the border into southeast Bangladesh, where more than a million Rohingya now live. Survivors of the exodus described scenes of rape, arson and indiscriminate killing of civilians, and U.N. investigators have called for the country’s military leaders to face charges of genocide.

The journalists’ case caused international outrage and brought heavy criticism to the government of Aung San Suu Kyi, the Nobel laureate who leads Myanmar’s civilian government. The case was seen as a major setback for press freedom in the country during its turbulent transition from military rule. In late April, Myanmar’s Supreme Court rejected the final appeal to release the men and decided to uphold their prison sentences, prompting further outcry.

Human rights and press freedom advocates around the world celebrated the pair’s release, but noted that dozens of people remain behind bars in Myanmar for reporting critically about the government or the military.

“These courageous investigative journalists should have never been arrested, much less imprisoned, in the first place and their release was long overdue,” Phil Robertson, Deputy Director for the Asia Division of Human Rights Watch, said in a statement. “But the crisis is not over for the literally dozens of other Burmese journalists and bloggers who are still facing baseless criminal charges for their reporting about the Tatmadaw or NLD government officials.”

Wa Lone and Kyaw Soe Oo were recently recognized as co-winners of the 2019 Pulitzer Prize for international reporting, and along with several other journalists, they were named as TIME’s Person of the Year in 2018. 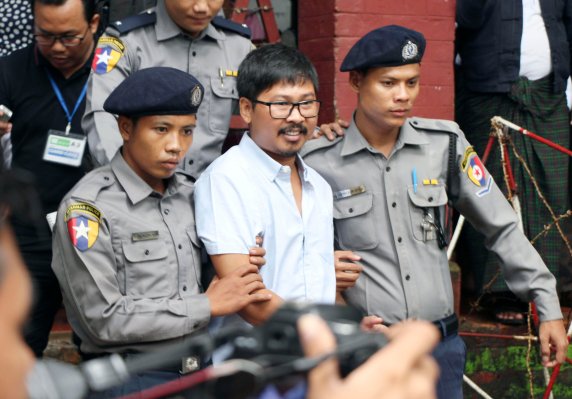