Turner matched her new husband Joe Jonas at the 2019 Met Gala with geometric Louis Vuitton looks to follow the night’s “Camp: Notes on Fashion” theme. The Game of Thrones star had her makeup and hair done to the fullest, with a smokey blue eye shadow look and silver glitter gel in her hair to accompany the glitter-adorned jumpsuit.

The newlyweds recently married in a surprise ceremony in Las Vegas, complete with an Elvis impersonator, a Diplo live-stream on Instagram and ring pops. No ring pops were visible in their Met Gala looks.

The couple last attended the Met Gala in 2017. Turner wore a gown by Louis Vuitton and her then-boyfriend donned a custom H&M black and burgundy striped tux.

It was a family affair at Monday’s event in New York. Jonas’ brother, Nick, and Priyanka Chopra, always a Met Gala stunner, showed up in matching looks that also turned heads. 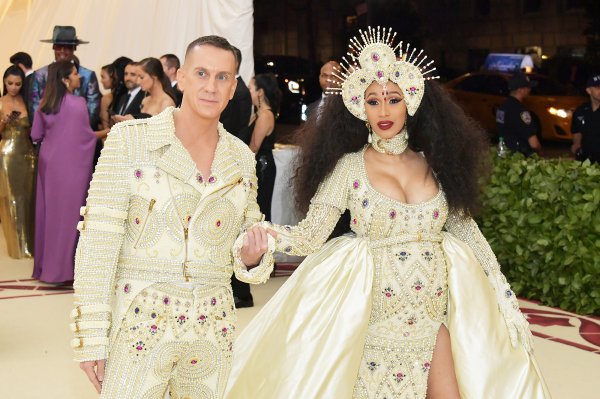 Let's Lock It Up Because Cardi B Just Shut Down the 2019 Met Gala in Her Elaborate Bloody Gown
Next Up: Editor's Pick