Katy Perry Attended the 2019 Met Gala as a Human Chandelier

Katy Perry is no stranger to camp. So it’s no surprise that for the “Camp: Notes on Fashion” theme at the 2019 Metropolitan Museum of Art’s annual Costume Institute Benefit in New York, she dressed the part.

Perry arrived to the 2019 Met Gala red carpet with a full-on chandelier costume, with candlesticks around her head and waist. The “Firework” singer lit the internet ablaze with the look, often posing without smiling — resembling Beauty and the Beast’s Lumière in her custom Moschino gown.

Under creative director Jeremy Scott, Moschino provided quite a few head turners for this year’s annual gala — and teaming up with Perry for this theme made so much sense, Scott told Page Six Style. “There probably isn’t a performer in pop history that’s used camp and humor more than she has,” Scott said of Perry. “I have guesses at what people expect from us, but I’m trying to outdo those expectations.”

Some people took to Twitter to make puns and memes out of the outfit.

But Perry’s look seemed to be an unquestionable fan-favorite early in the evening for its campiness. 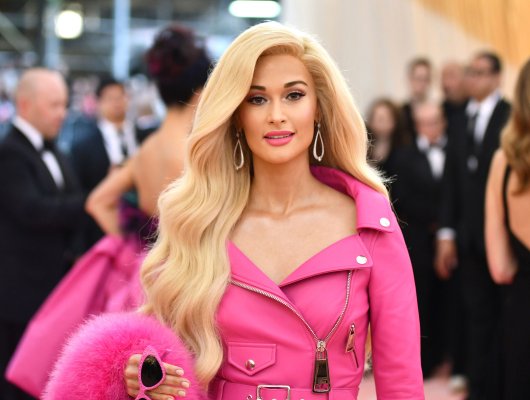 Kacey Musgraves Casually Rolled Up to the 2019 Met Gala in a Barbie Convertible
Next Up: Editor's Pick