After last week’s long-hyped Battle of Winterfell, fans had absolutely no idea what would happen in this week’s episode of Game of Thrones. But after “The Last of the Starks,” the future of the show has come into sharp focus: Daenerys is getting a villain edit.

Perhaps in an effort to even the playing field between the Dragon Queen and Cersei, the showrunners have depleted her military forces, taken out another one of her dragons, killed two of her closest advisors and prompted another two to scheme against her. This could result in a heroic comeback for Daenerys: She thrives when she’s at her lowest, like when she first emerged from that fire with her dragons or when she burned all the Khals holding her captive.

Daenerys Targaryen rides a dragon while retaliating for a surprise attack in Game of Thrones' season 8, episode four
Helen Sloan/HBO

But things are different this time — because now she’s apparently losing her mind as well, just like her father, Mad King Aerys. Some of her “paranoia” can be chalked up to simple sexism: Any woman would be annoyed if a group of men were celebrating the fact that her boyfriend rode a dragon when she’s been riding one for years. Show some respect.

Still, Daenerys has been giving off Mad Queen vibes ever since she burnt up Sam’s father and brother when they wouldn’t bend the knee last season. And in the first few episodes of season 8 she has glowered at anyone allying themselves with Jon, who she says she loves.

Arya and Sansa in particular seem determined to make a villain of the Dragon Queen. Daenerys has thus far refused to allow the North to rule itself — which would involve breaking with longstanding tradition and set a dangerous precedent in Westeros for any other kingdom that sought independence. But the rift between the Stark sisters and Daenerys has some fans theorizing that Arya will take out Daenerys, fulfilling the Red Woman’s prophecy that she would close brown, green and blue eyes. (What color are Daenerys’ eyes? You guessed it: green.)

Tyrion and Varys have the same conversation twice in the same episode about whether Daenerys is fit to rule. “She does not like to have her authority questioned,” Varys tells Tyrion. “I’m worried about her state of mind.” When Tyrion suggests that Daenerys and Jon could rule together, Varys rebuts that Dany is too strong for Jon, both failing to give Jon his due and adding a healthy dose of sexism into his argument.

Jon Snow and Daenerys Targaryen have an intense conversation in the fourth episode of Game of Thrones' season 8.
Helen Sloan/HBO

Dany even finds herself begging Jon not to reveal his true identity to anyone. A generous interpretation of that scene is that she is more comfortable with Jon than anybody else in her life. More likely she’s just desperate to maintain her claim to the Iron Throne. It’s a new sensation for Daenerys and it doesn’t look particularly good on her. Nor does it bode well for her in Game of Thrones’ final two episodes. She started out wanting to free the world of tyrants but in the process has become one. “Do not become what you have always struggled to defeat,” Varys warns her.

For some fans, the decision to cast Daenerys as an evil queen feels like an unearned turn in the story. Since the first season, Daenerys has been determined to sit on the Iron Throne. But never has she been so singleminded so as to alienate — and cause fear in — her closest allies. She was, after all, the Breaker of Chains, the woman who was going to break the wheel.

In order to keep the parallel plot lines going, the show presented Daenerys as an unabashed hero for seven seasons. She and Jon proved the most popular heroes to cheer for — not only because they cheated death but because they spent time with those who weren’t like them and learned to understand them. They saved the exiled and enslaved. Now, with just a few episodes left, the writers are determined to tear her down.

The show seems to have abandoned the notion that Daenerys could be a harbinger of change. “Have you ever considered the best ruler would be someone who doesn’t want to rule?” Varys asks Tyrion, not-so-subtly suggesting Jon would make a better king.

This idea of a ruler who has leadership thrust upon him — and it’s almost always a him — has been an ideal of mythology and history in Western culture for eons: Moses, Aeneas, Cincinnatus, George Washington, Harry Potter, Frodo Baggins — they all came to their heroic roles begrudgingly and therefore, in the eyes of their stories, more honestly. Jon is written in that mold.

That makes Daenerys his power hungry foil. There’s an additional layer of latent sexism to be analyzed here too: Cersei and Daenerys are two power hungry women, literally evil queens in fairytale parlance.

What has always been so arresting about Game of Thrones is its ability to subvert the tropes of fantasy and genre. It’s rare that someone on the show (or the Song of Ice and Fire books) has ever been truly good or evil. But the final episodes seem to have simplified historically complicated characters: Men like Theon and Jaime have been redeemed; Jon Snow looks to be the obvious choice for a selfless king; and now Daenerys and Cersei are prepared to kill one another — and thousands in the process — in their hunt for power.

And parentage has never mattered on the show — until it became the only thing that mattered. “Cripples, bastards and broken things” found their way to center stage over the last eight seasons, despite often being rejected by their parents (think disowned men and bastards like Tyrion, Sam, Gendry and Jon). Jon, Tyrion and Daenerys in particular all struggled to not carry on their parents’ legacies and differentiate themselves from their forebears in some way.

But now suddenly lineage is crucial to the story again: Gendry becomes a lord because his father was Robert Baratheon; Jon could inherit the throne because his secret is out; and Daenerys seems doomed to become a paranoid replica of her father.

Do the showrunners have another trick up their sleeve? It almost seems too obvious at this point for Daenerys to follow in her father’s footsteps and become the Mad Queen. With just two more episodes to go, there has to be another way. 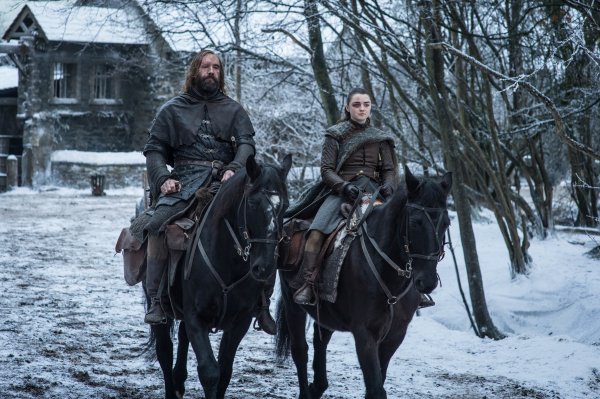 How Arya's Scene With the Hound May Hint at Her Next Big Kill on Game of Thrones
Next Up: Editor's Pick