Fighting Between Israel and Gaza Escalates Into Second Day of Airstrikes

Palestinian emergency personnel try to put out the fire on a car belonging to Hamas member Hamad al-Khodori, in Gaza City on May 5, 2019, after it was hit by an Israeli airstrike. A Palestinian militant was killed in an Israeli retaliatory strike in the Gaza Strip, Gazan officials said, in response to rocket barrages fired from the enclave.
MAHMUD HAMS—AFP/Getty Images
By Ivan Levingston and Saud Abu Ramadan / Bloomberg

(Bloomberg) — Israel and Gaza-based militants are digging in for extended fighting after a barrage of hundreds of rockets and retaliatory airstrikes boiled over into a second day, threatening to undo months of Egyptian-brokered efforts to reach a long-term truce.

Israeli Prime Minister Benjamin Netanyahu said Sunday he instructed the army to continue its “massive attacks” in Gaza and bolstered forces near the coastal strip. Militant groups, who want Israel to do more to alleviate the misery in blockaded Gaza, have threatened to send rockets deeper into Israeli territory as important dates on the calendar approach.

Israel commemorates its memorial and independence days this week, and militants have vowed to ruin the May 18 Eurovision song contest in Tel Aviv. Canceling the competition — or holding it under rocket fire — could harm Israel’s effort to showcase itself as a top-tier tourist destination.

“They thought that because it’s before the Memorial Day of Israel and the Independence Day of Israel and the Eurovision which is in a week or two in Israel, Israel will not retaliate, but it was a huge mistake,” former Israeli National Security Adviser Yaakov Amidror said on a press briefing.

At least 10 Palestinians and three Israelis have been killed since lower-level fighting on Friday escalated into intense fighting the following day. A Palestinian baby and her pregnant relative were among the dead, though the army denied responsibility and said the two were killed by rockets fired from Gaza that fell short.

Rocket bombardments began Saturday morning and about 450 had been fired by Sunday afternoon. More than 100 rockets were intercepted by missile defense batteries, but several scored direct hits on homes, factories and cars.

For more than a year, Hamas has been sponsoring weekly protests at the border designed to draw attention to the Palestinians’ plight and deflect popular anger over Gaza’s crushing poverty away from Hamas’s own failures and onto Israel. Gaza has been under an Israeli and Egyptian blockade since Hamas wrested control of the territory in 2007, and sanctions imposed by the West Bank-based Palestinian Authority, which is locked in a power struggle with Hamas, have intensified the strip’s distress.

Despite repeated confrontations this year, the Israeli government and Hamas have refrained from the sort of full-scale wars they’ve waged three times since the militant group seized control of the strip. Israeli officials have said their priority is to confront Iran’s attempts to entrench itself militarily in Syria, on Israel’s northern border, and don’t want to get bogged down in Gaza instead. 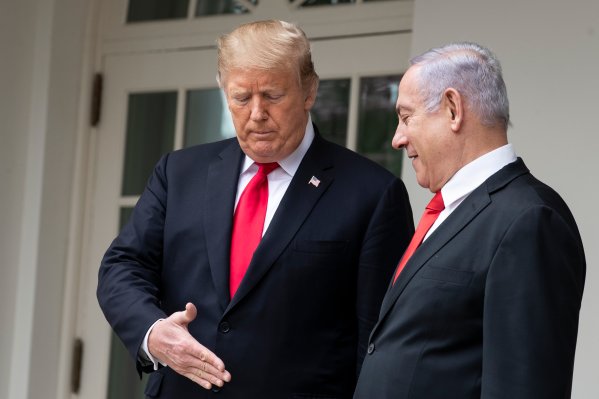 Trump and Netanyahu Are Breaking the Bond Between American Jews and Israel
Next Up: Editor's Pick