The Mueller Report Made It Clear: America's Response to Russia Has Been Far Too Weak

Russia's President Vladimir Putin attends an Orthodox Easter service at the Cathedral of Christ the Saviour.
Mikhail Tereshchenko—TASS/Getty Images
Ideas
By James Stavridis
Admiral Stavridis (Ret.), a TIME Contributing Editor, was the 16th Supreme Allied Commander at NATO and is an Operating Executive at The Carlyle Group. His new book is 2034: A Novel of the Next World War. His previous nonfiction book was Sailing True North: Ten Admirals and the Voyage of Character

With Attorney General William Barr having testified about the Mueller Report before Congress, and further hearings about and investigations into the President’s actions assuredly ahead, the political drama stemming from the Mueller Report seems poised to overwhelm the attention given to the threat to our elections named in its very title: “Russian interference.” Without question, we suffered a direct attack on the heart of our democratic system at the hands of the Russians—and without question, we have responded with precious little beyond a few symbolic gestures.

The central question of today must be: How do we stop this from happening in 2020? And more pointedly: How do we retaliate against Russia, now that the facts are so largely before us?

Yes, Congress did pass retaliatory sanctions against Russia in the spring of 2018 — despite the President’s initial resistance — that identified several dozen Russian mid-grade intelligence, military and political figures, then froze their assets and foreclosed their travel, precluding any ability for them or their companies to conduct commercial business with the United States. And President Trump did subsequently issue an executive order last September mandating an investigation after an election into whether foreign entities interfered, and if one did, requiring the imposition of “appropriate sanctions.” But these measures are not remotely sufficient. They strike a relatively junior group of Russians and are not highly visible. They will not for a moment get the attention of President Putin.

So what kind of sanctions are “appropriate,” now that the Mueller report is out?

Senators Marco Rubio and Chris Van Hollen have once again introduced legislation that would give the Director of National Intelligence 30 days to find whether election interference had occurred and, if so, impose stricter sanctions on Russian banks and energy companies. Senators Bob Menendez and Lindsey Graham have also reintroduced a similar bill — though it remains to be seen if Trump’s Republican allies in the Senate will actually take the action required to ensure politics do not infect and inhibit a response in the event of another attack

The U.S. should not limit itself to hampering Russian businesses, though. They should also consider sanctions on public entities (sports teams, international symphonies, academic institutions, diplomatic delegations) — and even include specific sanctions against key leaders in Russia, up to and including Putin. This could include revealing details of their personal financial arrangements abroad; using cyber means to deplete their access to such funds and publicizing the actions; or sanctioning any global financial institution dealing with their assets. While we have not taken such steps against the leader of a nation with a permanent seat on the U.N. Security Council and his most senior team in the past, the attack against us in 2016 calls for unprecedented measures.

And there are other forms a response can take—especially since, as Senator Rubio has acknowledged, there seems to be “sanctions fatigue” in Congress. American can support, in both overt and covert ways, individuals and groups in Russia that are seeking to support democracy. We can impose travel restrictions more broadly on Russian citizens who seek to come to the United States for any purpose. Or we could reduce our willingness to cooperate in other Russian initiatives globally, from reconstruction in Syria to price support for oil prices.

All of these actions would be clearly proportional, given the high level of disruption achieved against America’s democratic process, and would send a strong signal to the Russians. We could justifiably undertake them directly now or warn the Russians that if any further breaches occurred, we would be using such mechanisms against them. This could be conveyed either publicly and formally by an executive order or through so-called diplomatic “track 2” mechanisms. The “track 2” approach is less confrontational and would consist of a former senior U.S. official (such as an ambassador or military officer) providing direct warnings to the Russians.

Congress should also match the drive for hearings about the President’s political actions with deeper explorations of exactly what Russia did. The Mueller Report began that process, but there are more layers to pursue that will help determine what options are most appropriate. We need more detail concerning the use of cyber and social networks; who within the Russian chain-of-command ordered the attacks; and whether there are further such attacks planned. Some of this would have to be conducted in closed sessions, given the classified nature of the information, but a great deal could be done in public. Such hearings should include Director of National Intelligence Dan Coats, head of the CIA Gina Haspel and General Paul Nakasone, who is both Commander of U.S. Cyber Command and the Director of the National Security Agency. Having answers to these questions from these sources will also let the U.S. and global public see the fuller extent of what happened — and a public forewarned is far less likely to be fooled.

None of this should replace domestic measures, which must be taken simultaneously. The Department of Homeland Security should mount a broad campaign, working with national cybersecurity companies, electoral process experts, and both state and local governments (many of whom do not have the resources or sophistication to undertake this effort). This should include a national examination of “best practices” in our various state election systems; a mandatory, federally-evaluated test for each state to pass to be certified to hold elections; and drills conducted at the federal, state, and local level to actually test our readiness. Beyond this, we should also educate our children at the earliest age about what information is real and what is fake, especially in digital settings. Above all, we need to pass new laws that stop any campaign from seeking or benefiting from foreign influence, especially given how the Mueller Report reveals several places where such actions slipped through the cracks between criminal statutes.

All of this is to say: We have the right tools to respond to the attack on our democracy. But we have not used them nearly enough. 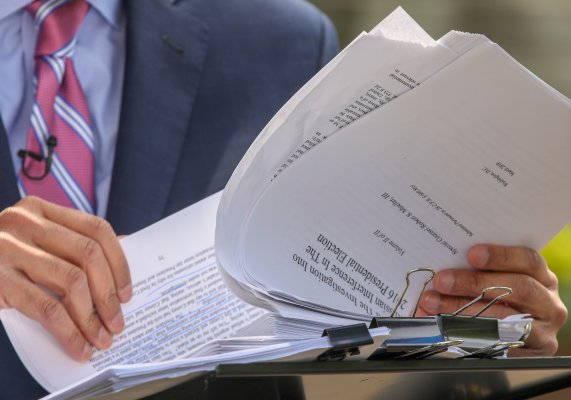 What Happens Next with the Mueller Report? The Answer May Lie in the Footnotes
Next Up: Editor's Pick