Venezuelan opposition leader and self-proclaimed acting president Juan Guaido (C) speaks to supporters next to high-profile opposition politician Leopoldo Lopez, who had been put under home arrest by Venezuelan President Nicolas Maduro's regime, and members of the Bolivarian National Guard who joined his campaign to oust Maduro, in Caracas on April 30, 2019.
CRISTIAN HERNANDEZ—AFP/Getty Images
By Ian Bremmer

Self-proclaimed “interim president” Juan Guaido gambled this week to try to force the ouster of de facto Venezuelan president Nicolas Maduro, calling on the Venezuelan people to join him in mass protests and military officials to defect to his side. People showed up to protest—both for and against Maduro—but the military defections Guaido hoped for never quite materialized.

When it comes to politics, timing is everything. Guaido had real momentum in January when he announced that Maduro’s electoral win was rigged and illegitimate (correct on both counts), and that Venezuela’s constitution empowered the head of the country’s parliament (read: him) to serve as president until free and fair elections could be held. The US backed Guaido immediately, a diplomatic victory which opened the door for other countries to follow suit—more than 50 countries now recognize Guaido as the country’s rightful leader. But none of those countries were willing to do much beyond sanctions and humanitarian aid. In fact, the one country that seemed committed to sending in military assistance of any kind was Russia, which had invested heavily in the Maduro regime. That effectively meant that while Guaido was an international cause celebre, Maduro was the one who controlled the country’s military and security forces on the ground. And without control of those forces, Guaido was just another Venezuelan opposition leader.

Guaido has thus spent the last three months trying to peel military supporters away from Maduro. At the beginning of this week, it seemed like he may have actually pulled it off—in a video featuring Leopoldo Lopez, the opposition leader and Guaido’s political mentor who had been under house arrest for the last two years—Guaido announced that the final phase of “Operation Liberty” had commenced, and called for the Venezuelan people to join him in protests to force the ouster of Maduro once and for all. Lopez was released by dissident military officials that had switched loyalties to Guaido, a sign that Guaido was gaining traction among the country’s security apparatus. Combined with the strong rhetoric from US National Security Advisor John Bolton and Secretary of State Mike Pompeo, there was genuine hope that this was the beginning of the end for Maduro. But three key officials that the opposition hoped would switch to their side—the country’s defense minister, the chief judge of the Supreme Court and the head of Maduro’s presidential guard—remained loyal to Maduro. Maduro thus ends the week in a much stronger position than when he started it, and Guaido and Venezuela’s opposition are now on the backfoot.

Guaido just suffered his most significant defeat since storming onto the world stage a few months ago, and it’s not clear where he goes from here. Guaido needs to keep both the Venezuelan public as well as the international community engaged and on his side as developments in the country unfold, but the failed attempt to force matters to a head significantly hampers his ability to do both. Guaido managed to cobble together support from certain members of the National Guard and Venezuela’s Secret Service, but was unable to show that he flipped any members of the armed forces with any operational relevance or with significant troops under their command. It’s still unclear whether Guaido had bad intelligence, supposed-defectors got cold feet, or if Guaido just hoped that a daring gambit would swing things in his favor.

But now Maduro is emboldened. What he does with that remains to be seen—he could go after Guaido and try to get him arrested or exiled, but that runs the risk of drawing the ire of the international community and reviving support for Guaido. His smartest move might be to just let Guaido spin his wheels and wait for fractures in the country’s opposition to emerge as they argue over next steps.

Guaido’s tough week also shows the limitations of US support, and makes US military intervention even more unlikely that it was before. Despite the strong rhetoric from Bolton and Pompeo, President Donald Trump has never been a fan of foreign interventions, and the prospect of taking on a Maduro who just showed that he still commands the loyalty of Venezuela’s security forces is unlikely to change that.

“I worry that this kind of semi-regular raising of expectations to very high levels wears — and makes the kind of internal pressure that needs to build harder to happen,” –Daniel Resrepo, NSC Latin America Advisor in the Obama administration.

Pompeo claims that Maduro was about to leave Venezuela this week until the Russians told him to stay put, which the Russians denied. To understand why Russians hold so much sway from half a world away, read this piece I put together a few weeks ago for Time.

…and the winner of this political drama gets to preside over a sinking Venezuela. Not much of a prize if we’re being honest. 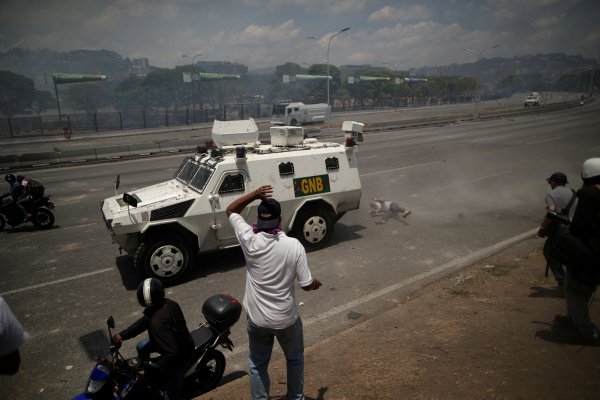 In Venezuela, Uncle Sam Roots From the Sidelines
Next Up: Editor's Pick