'There's No Way to Do This and Make It Okay.' John Oliver Talks Lethal Injection on Last Week Tonight

John Oliver is making the most of having Game of Thrones as the opening act for Last Week Tonight and dedicated his main story to the desert rain frog. If you don’t care about desert rain frogs, it’s only because you haven’t seen them in action. (They squeak like dog toys when they’re mad!)

Speaking of being mad, Oliver used a bait-and-switch technique and instead of talking about adorably angry frogs, he turned the subject to something far more serious — lethal injections, which are one of the most common means of executing condemned prisoners. While Oliver is adamantly opposed to the death penalty as morally wrong, he notes that if you do support it, you may care about how it is performed.

Lethal injection was initially seen as a more humane option than the electric chair in administering the death penalty. Unfortunately, according to Oliver, that is simply not the case. This is due in part to the fact that lethal injections are performed by “amateurs,” according to Oliver, because medical personnel cannot be involved in executions as they violate their ethical codes. The other reason has to do with the combination of drugs given during executions. There’s an anesthetic, a paralytic, which reportedly can make people feel like they are suffocating while awake, and the final dose which feels like “fire in your veins” before it puts the person into cardiac arrest.

As Oliver points out, the fact that this horrifying three-step process is considered more humane than the electric chair is “pretty debatable.” “It’s like asking which movie has sexier CGI characters: Zootopia or Monsters Inc?” he quipped. “It’s not clear cut and the question in and of itself is disturbing.”

The chosen drug for years was Sodium Thiopental, but supplies ran out. That led one prison to buy it on the blackmarket from a pharmacy run out of a British driving school, which Oliver noted was “the most lethal thing to come out of a British driving school since Prince Phillip.” Now, many prisons have turned to Midazolam, which inmates have sued to prevent them from administering because it doesn’t work, and instead becomes an implement of torture. So with drug options limited, at least one prison told death row inmates that they could purchase their own drugs to bring to the execution. Oliver pointed out that’s a bit like “asking a one-year old to provide his own birthday cake.”

The combination of lack of medical expertise and bad drugs leads to a lot of botched executions. “The list of botched executions is long and it is horrendous,“ said Oliver. In the investigation into one execution that went very badly, a prison worker explained that before the execution they went on “wikileaks or whatever” to research the drug they wanted to use and decided it was sufficient, when it was not. In response, Oliver bought the website Wikileaksorwhatever.com and put a note on the screen that reads, “Midazolam doesn’t keep you from feeling pain. Please stop using it in executions,” along with a picture of a desert rain frog, of course.

The high rate of botched lethal injections has gotten so bad that some prisoners are now asking to be put to death in the electric chair instead, which Oliver believes does away with the notion that lethal injection is more humane.

“There’s no way to do this and make it okay,“ said Oliver. “Lethal injection isn’t about what kind of people they are, it’s about who we are.” 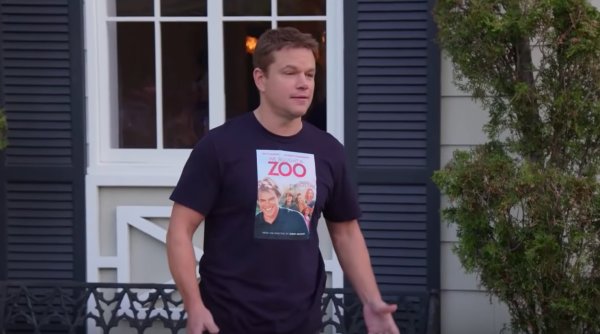 There's No End to Jimmy Kimmel's Torment of Matt Damon and He Just Upped the Ante
Next Up: Editor's Pick