Senate Republicans are breathing a sigh of relief after President Donald Trump’s controversial pick for the Federal Reserve decided to bow out in the face of persistent controversy over his past remarks.

The decision spared them from having to cast a vote on Stephen Moore, a regular on cable news and Trump’s pick for the powerful central bank, that would either mean confirming a nominee many considered unqualified or else incurring the wrath of the president’s fans online and at the ballot box.

“Steve Moore, a great pro-growth economist and a truly fine person, has decided to withdraw from the Fed process,” the President tweeted. Trump added that he had “asked Steve to work with me toward future economic growth in our Country.”

A short time later, Moore allies released his letter of withdrawal. “I am respectfully asking that you withdraw my name from consideration. The unrelenting attacks on my character have become untenable for me and my family and 3 more months of this would be too hard on us,” Moore wrote.

Moore had come under fire for many, many comments that were going to be problematic in his confirmation hearing. He had written that women were inferior to men and American society would fall apart if men weren’t the main breadwinners, for example. He also seemed to oppose women serving in the military, co-ed sports and feminism. Senators, who have final say over who gets to take a seat on the Fed, were also uncomfortable with what appeared to be a move by the White House to put a campaign adviser and Trump yes-man on the historically independent board.

Moore and the White House remained defiant as Congress returned from its spring recess. On Tuesday, Moore said Democrats were “pulling a Kavanaugh against me.” That was a reference to now-Supreme Court Justice Brett Kavanagh, whose confirmation ran into trouble when uncorroborated allegations of sexual assault were raised. Republicans — and Democratic Sen. Joe Manchin of West Virginia — muscled Kavanaugh to confirmation in the face of he-said-she-said accusations. In this case, though, Moore’s words are on tape or in print.

Many Senators already had said they weren’t comfortable with his record. Others worried about the Fed’s storied independence from the White House and political consideration, also a factor in the failed nomination of former Godfather’s Pizza CEO Herman Cain to the Federal Reserve. The last thing the economy needs at this moment, many on Capitol Hill said, was a central bank trying to goose the economy as the President was heading into what may be a difficult re-election bid.

“I don’t know what they were thinking,” one senior Republican aide on Capitol Hill said. “The fact he was never nominated tells me that they were doing this as a dog whistle to his CPAC base.” The aide added: “The fact he was part of a package with Herman Cain tells you just how little this White House understands the Senate right now.”

Cain, a 2012 presidential hopeful whose campaign was ended by allegations of an extramarital affair and several instances of sexual harassment, had also been floated by Trump. But after three weeks of renewed scrutiny about his personal conduct, he pulled the plug, saying he had not realized it would affect his ability to make money giving speeches.

A second GOP aide said Trump misread the Senate’s willingness to go along with him on a post as important as the Fed. Not only will voters next year render a judgment on the economy toward the President, voters will also let Congress know its views. And many Republicans are already gearing up for a tough defensive map in places like Arizona, Colorado and Maine. Given a choice between giving Trump a nomination victory or keeping their power next year, no one is betting on a fear of Trump prevailing.

The fight over Moore’s nomination was not going in the White House’s favor. Trump sees the central bank as a roadblock to his economic record and sought to install two loyalists on its board. Breaking with tradition, Trump has directly sought to intervene in the board’s decisions on interest rates. Moore, who founded a super PAC to defend Trump, seemed to be in lockstep with the White House’s economic vision.

That led to more than a little queasiness among lawmakers. Sen. Joni Ernst of Iowa, who served in the Iowa Army National Guard, was the first to publicly say she was not backing Moore. Others, like Sens. Susan Collins of Maine and Shelley Moore Capito of West Virginia, said they were not enthusiastic. And Sen. Martha McSally of Arizona, an Air Force veteran, was fastidious in her non-commitment. All four face voters next year in states where there are deep pockets of support for the President but where his support alone is unlikely to be sufficient for them to win.

Even Sen. Lindsey Graham of South Carolina, a Trump booster of the first order these days, called the nomination “problematic.” Fellow South Carolina Sen. Tim Scott said Moore’s best hope was to squeak by, while Sen. Richard Shelby of Alabama pointed to the accomplishments of his wife, a professor, as a rejoinder to Moore’s assessments of women.

All of which comes before the personal politics of two Republican senators. Moore had written a column in 2003 seeking the impeachment of then-Georgia Gov. Sonny Perdue. Perdue is now Trump’s Agriculture Secretary and Perdue’s cousin, Sen. David Perdue of Georgia, sits on the Senate Banking Committee.

And when Trump was considering Mitt Romney for Secretary of State, Moore called it a betrayal of the Trump coalition if the 2012 nominee were to join the Cabinet. Instead, Romney moved to Utah, ran for the Senate and won.

“The math wasn’t there for Moore,” said a third GOP Senate aide. “We went around the room when we got back from break. We couldn’t come up with the votes.” The aide noted that it was a personal disappointment for many lawmakers who for years have enjoyed his commentary, both on television and at conservative conferences.

“Liking someone,” the aide said, “isn’t enough to give him the keys to the Fed.” 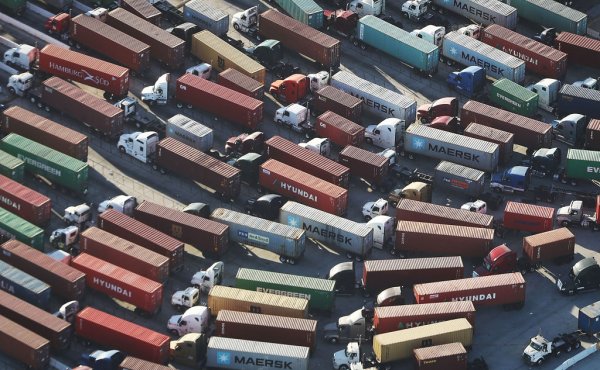 Why the Shrinking Trade Deficit Signals Good Things About the U.S. Economy
Next Up: Editor's Pick