Christina Grimmie was a fan of talented Disney starlets like Hannah Montana who parlayed careers in children’s television into pop music. Aged 15 in 2009, Grimmie uploaded one of her first tracks to YouTube — a cover of Party in the USA by Miley Cyrus (who played Montana in an eponymous TV series). It went viral. In 2011, she released her first EP, then moved to Los Angeles. In 2014, she came third in the U.S. TV talent show The Voice, extending her popularity beyond her millions of subscribers. All the while she kept uploading videos, knowing that it was important to maintain that personal, unfiltered connection with her fans. Little did she know the trouble it would bring.

On 10 June 2016, after a concert in Orlando, Florida, Grimmie held a meet-and-greet for her fans. One of them was Kevin James Loibl, a 27-year-old from nearby St Petersburg, who arrived with two handguns and a hunting knife. As Grimmie signed autographs, Loibl shot her four times, then turned the gun on himself. Grimmie was pronounced dead later that evening. She was 22. Local police said that the gunman had shown an “unrealistic infatuation” with Grimmie.

The desire of obsessive fans to harm famous people is not new (John Lennon was assassinated in 1980 and Gianni Versace in 1997 by fans who felt some kind of ownership or relationship with them), but YouTube can stoke that obsession even further. Firstly, there is the apparent closeness of the relationship between star and fan, with the creator throwing out mentions in their videos and social media posts and staring directly into the lens – and thus the viewer’s eyes. Secondly, those stars are expected to be more accessible than conventional celebrities, as shown by the Grimmie meet-and-greet, common to pop stars and YouTubers. More than a quarter of people aged 18-24 told the pollsters asking them for this piece that they know KSI (another famous YouTuber) well.

Viewers feel that connection intensely: 47% of millennials admitted in an Ipsos Connect survey that YouTube improved their mood or health. Rather than picking up the phone to a friend, people are turning to their favourite YouTuber.

Ian Danskin, a YouTuber who posts essays on new media, film and video games, says: “Internet fame simultaneously creates the sense that a person is a celebrity but also that that person is your friend. Having those two things happen at the same time (not only is this person famous and getting judged by the rules of famous people, but also you have an intimate access to them and judge them in the way you would if your friend was acting badly) is weird.”

Many viewers want to get close to their YouTube heroes. In January 2019, the centre of Birmingham, Britain’s second biggest city, was brought to a standstill when the makeup artist and model James Charles appeared at a makeup store in Birmingham’s Bullring shopping center. A three-year veteran of YouTube about to enter his 20s, Charles has more than 14 million subscribers who he calls Sisters. Eight thousand people poured into Birmingham to see him, many driven by their parents. During the worst traffic jams at 2 p.m. on the day, what would normally be a 15-minute bus journey took 75 minutes.

This story is adapted from YouTubers: How YouTube shook up TV and created a new generation of stars, by Chris Stokel-Walker
Canbury Press

In February 2018, one fan decided that he wanted to get even closer to another big YouTuber, Logan Paul. Twenty year-old Tahj Deondre Speight decided to break into Paul’s $7 million home in the San Fernando Valley in California. When the YouTuber returned home with his father at around 10pm, Speight was asleep on the sofa in the living room, charging up his phone in a power socket under a coffee table. As Paul’s father grabbed the intruder, Paul shouted at Speight: “Yo, who the fuck are you? My boy, we are about to fucking murk [stab] you.” Though the footage was captured on camera and uploaded to Paul’s YouTube channel, police confirmed the incident actually happened, saying that Speight told them he wanted to meet the YouTuber. One of the many reasons Logan’s brother Jake left his rented home was that the fans who would stake out his front door had tested his neighbours’ patience.

Whenever the mass media report such incidents, they do so in bafflement, but they shouldn’t. YouTube has created a new dynamic between fans and stars. Creators involve fans in achieving their triumphs and fans feel a sense of ownership of those successes. This tends to surprise adults who have never been within 100 miles of Tom Cruise or Nicole Kidman.

British newspapers, for instance, mocked the news that vlogger Joe Sugg was a contestant on the high-ratings BBC talent show Strictly Come Dancing in August 2018. Four months later, Sugg was in the final. Despite his gangly limbs and awkward demeanour, 27-year-old Sugg’s route to the final was smoothed by a growing aptitude for fleet-footed dancing, yes, but also because of a dedicated following who voted for him in the public vote, some 30 or 40 times every week.

The organizer of online video festival Summer in the City Tom Burns points out that Sugg’s sister, Zoella, and her boyfriend Alfie Deyes are similarly adulated. “There was a period when people would make videos and say: ‘I just went down to Brighton Pier and 200 of you showed up, it was crazy’,” Burns says. At face value, that sounds like a compliment to those 200 fans – so 200 more would turn up the next time. Fans would begin tracking the movements of their favourite YouTubers, triangulating their location from social media posts (because this generation of celebrity always has to shine some light on their personal lives to be considered authentic), hoping to catch a glimpse of them.

Burns watched a video uploaded by Deyes of a tour he and Sugg were doing as part of Zoella’s book tour in London. He says: “The taxi is surrounded by fans banging on the window trying to get their attention. [Deyes] is saying this is crazy, but at the same time not wanting to slam the fans while umming and aahing about how it’s gone too far. That’s where it happened.” A boundary had been crossed, and new rules about the interactions between creators and viewers (perhaps now better called fans) needed to be drawn up. That is why Summer in the City now has a backstage area. Burns says: “There was this initial burst of: ‘This is so cool, I’ve got this big following, come meet me,’ and then: ‘Actually guys, when we’re in public we want to be private; don’t look over our walls at home.’ The boundaries got pushed further and further away again.”

Burns is definitive about the change. “YouTubers have become less accessible,” he says. “Some people say it’s for good, some people say it’s for the worse, I think it’s one of those things where as it got more popular, it’s inevitable.” Almost every year in videos or newspaper interviews, Zoella and Deyes plead with their fans not to visit their home to try and meet them. In 2017, Deyes told The Telegraph that he and his girlfriend face daily intrusions into their lives from parents driving their children to their door. “I’m always polite, but the way I see it, not even my mum turns up uninvited,” he said.

Christina Grimmie’s murder was “a huge wake-up call for a lot of YouTubers,” according to the site’s unofficial historian Anthony D’Angelo. Major personalities on the site began bumping up their personal protection; VidCon (another online video festival) that year made major security changes to keep the talent attending the event safe. “For a long time YouTube survived on this rhetoric of equity,” D’Angelo said. There was a belief that the playing field had been leveled; media had been democratized, and success could come to anyone. “In many ways this is true, but it brings problems with it.”

Until Grimmie’s untimely death, people knew that the more open, democratic way in which YouTube encouraged connections between creators and viewers might be a problem. After her murder, they realized it was a problem.

This piece is an adapted excerpt from YouTubers: How YouTube shook up TV and created a new generation of stars, published by Canbury Press (May 2, 2019) 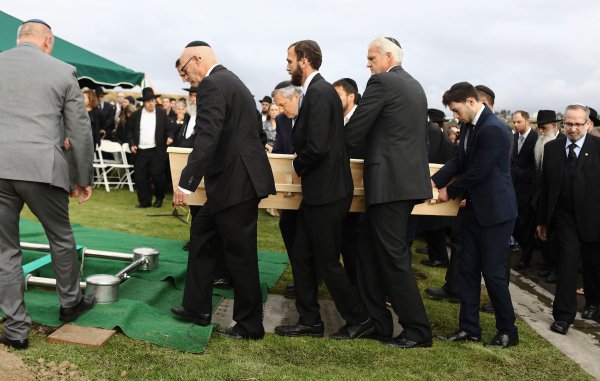 Why Blocking Hate Sites Like 8chan May Only Make Them Stronger
Next Up: Editor's Pick