In Venezuela, Uncle Sam Roots From the Sidelines

Amid the turmoil on April 30, a protester is hit by a Venezuelan National Guard vehicle in Caracas
Ueslei Marcelino—Reuters
By Karl Vick

In the predawn hours of April 30, the contest for control of Venezuela once again appeared to be coming to a head. Juan Guaidó, the young reformer who claims the mantle of President, announced from inside a military base in the capital, Caracas, that he was taking charge. And nearby stood evidence that the security forces were finally falling in line: fellow opposition leader Leopoldo López, freed from house arrest, his guards apparently having defected.

“At this moment, I am with the main military units of our armed forces, starting the final phase of Operation Liberty,” Guaidó said. He called on Venezuelans to gather in the streets to take power from Nicolás Maduro, who has sat in the presidential palace since 2013 but whose presidency has been deemed null and void by much of the international community.

By day’s end, however, the uprising was anything but final–and the only thing clear was how much has changed in Latin American politics in the 21st century. From 1900 to 2006, power changed hands in the region 162 times via military coup, typically announced from the studio of a state broadcaster. In a striking number of cases–at least 41, by the count of a Harvard study–the force behind the coup was the U.S., which maintained a proprietary hold over the hemisphere it regarded as its realm.

This time the picture is as diffuse as the forces holding the situation in stalemate. Washington clearly has an appetite for toppling Maduro, as tweets from Secretary of State Mike Pompeo and Vice President Mike Pence made clear. But Uncle Sam could credibly claim to be one of a crowd. Some 50 nations recognize Guaidó’s claim to the presidency, and support also came in tweets from the governments of Brazil, Colombia, Paraguay and others. It was Chile that opened a diplomatic residence to López, free from house arrest but not safe in a divided and dangerous Caracas. He later moved to the Spanish embassy.

Just as in February, when Guaidó traveled to Venezuela’s border with Colombia in hopes of riding blockaded aid trucks to victory, things did not go as planned. Geoff Ramsey, an analyst at the Washington Office on Latin America, told TIME the day showed that “neither the regime nor the opposition is as strong as they thought they were.”

‘Guaidó and Leopoldo López are in a situation where there is no turning back.’ Hamilton Mourão, Brazil’s Vice President, on Guaidó (left) and López (right)
Manaure Quintero—Reuters

Neither is Washington. As Maduro’s security forces resisted and Guaidó’s call to action fizzled, top Trump Administration officials were reduced to accusing Maduro loyalists of backing out of promises to defect.

So the standoff resumed. Maduro remains deeply unpopular, tied as he is to the near total collapse of the economy, which has driven 3.7 million Venezuelans to leave the oil-rich country. That exodus into the neighboring nations has galvanized the region to overthrow Maduro–but nonviolently.

Yet despite U.S. economic sanctions, Maduro still has funds to buy the loyalty of senior military officers. And Guaidó isn’t the only one with international backers. Maduro has the support of Cuba, China and, most of all, Russia, drawn both by oil and ambition. And ordinary Venezuelans fear the plainclothes thugs loyal to Maduro known as colectivos, notorious for firing into crowds and targeting protesters.

The Trump Administration is preoccupied by the involvement of Moscow and Havana in Maduro’s survival. In a tweet on April 30, President Donald Trump threatened a “full and complete embargo” on Cuba if it did not withdraw troops he said were assisting Maduro. Pompeo earlier claimed the Kremlin had stepped in to persuade Maduro not to flee. “He had an airplane on the tarmac, he was ready to leave this morning, as we understand it,” he said in an interview, “and the Russians indicated he should stay.”

Ramsey says the White House has involved itself in Venezuela mainly to enhance electoral prospects among right-wing expatriates of the region in Florida. White House National Security Adviser John Bolton was at the Bay of Pigs Veterans Association on April 17, the 58th anniversary of the Cuban exiles’ failed bid to take back the island with the backing of the CIA. But the White House threat that “all options are on the table” has not reached the Pentagon, which has said it has no plans to intervene. Clearly, Maduro feels he can confidently ignore the saber’s rattle.

“In some ways it’s good, obviously, because the U.S. is no longer the great regional hegemon that determines everything that happens,” says Phil Gunson, a Latin America analyst with the International Crisis Group. “The sense that this is more multipolar now is not by any means a bad thing. But there doesn’t seem to be an easy way to resolve these things anymore.” 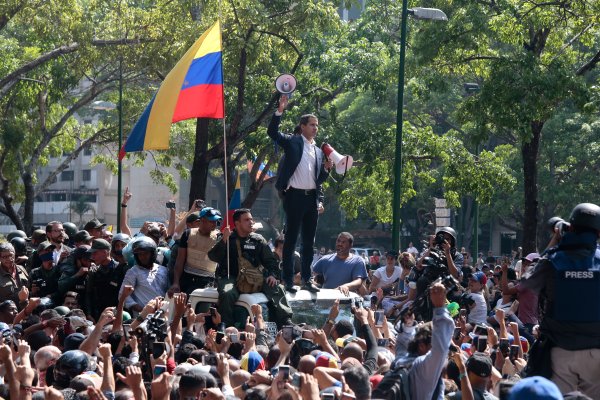 U.S. Military Intervention in Venezuela Is 'Possible'
Next Up: Editor's Pick