“I like a challenge,” says Beavers, with foster daughter Sydney
HBO
By Belinda Luscombe

Earcylene Beavers always wanted a lot of children, and she got her wish–just not the way she expected. Beavers, who’s in her 60s, gave birth to a daughter, but has mothered more children than she can count through the foster system. She currently has four at home, including one of the three she adopted, Jake, who has cerebral palsy.

While the rate of child maltreatment has dropped in the past 30 years, U.S. child-protection authorities still get about 4 million calls a year. Research suggests that 1 in 8 American children is neglected or abused by the age of 18. It’s one thing to know the numbers behind the foster-care system. But it’s quite another to watch Denyshia, 13, one of Beavers’ charges, say matter-of-factly, “I was abandoned … I didn’t think no one would ever want me.”

America’s foster-care system, which is typically covered by the media only in the wake of egregious failures and the discovery of horrifically treated children, has recently been receiving a second look. The TV show The Fosters had a respectable five-year run until 2018, the same year Sean Anders’ semiautobiographical comedy Instant Family found box-office success. Now there’s the documentary Foster, debuting May 7 on HBO, which takes a look at the guts of the Los Angeles department of children’s services, the largest county child-protection agency in America.

Beavers is one of several admirable people the documentary follows, along with judges, commissioners, social workers, lawyers, first responders and child advocates. The humanity of each one is beyond dispute. Yet, as the film shows, the system they help comprise looks different for the people caught in it–like Dasani, 16, who is put in juvenile hall after an alleged fight at his group home is followed by a positive test for marijuana. If he had parents, they’d handle it in-house–but the man he called his dad murdered his mom. The menu of disciplinary responses for kids in foster care is much sparser and usually involves law enforcement, so Dasani winds up under court supervision.

The Foster System is difficult for media to portray well for a reason: it’s built to protect young people, both their safety and their privacy. One of the real achievements of the filmmakers, producer Deborah Oppenheimer and director Mark Jonathan Harris (who together won an Oscar for Into the Arms of Strangers, a film with a related theme), is the legwork they must have done to earn the trust of many of the system’s players. Oppenheimer went for ride-alongs with social workers late at night to see how they worked, and the crew was granted close access to the courts, even following one couple as they try to win their newborn daughter back after the mother tests positive for cocaine in the labor ward.

What the film makes clear is that many people who work in the foster system are as good-hearted, skilled and industrious as you could hope humans who work with fragile children would be. And yet the system struggles mightily to be anything approaching humane. The infrastructure that must be built when a family collapses does not have the luxury of being graceful. “This work is hard as hell,” says foster child turned social worker Jessica Chandler in one of the film’s blunter moments.

Oppenheimer says she hoped to make a hopeful film, one in which Beavers gets legal guardianship of one of her foster children, Dasani is not incarcerated, and the drug-taking mom gets clean and reunites her family. But as the credits roll, the epilogues do too. Beavers is inundated with requests to help. Nobody takes in Dasani. The new parents split. When families come apart, victories don’t last long. 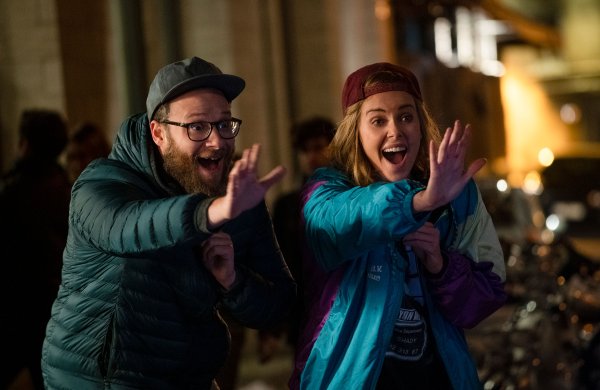 Theron Is a Sure Thing In Long Shot
Next Up: Editor's Pick