A patrol agent talks with detained migrants at the U.S.-Mexico border in El Paso, Texas, on March 31, 2019.
Justin Sullivan—Getty Images
By Hillary Leung

Department of Homeland Security (DHS) officials will soon pilot a DNA testing program at the U.S.-Mexico border in an attempt to catch migrants traveling with children who are not their own.

The program is set to start next week at two ports of entry, CNN reports, and will run for two to three days.

DHS says it has seen a “staggering increase” in the number of instances of adults traveling with unrelated minors and claiming falsely to be a family unit.

Such cases have reportedly risen by 315% from October 2017 to February 2018 and are examples, it claims, of migrants taking advantage of “legal loopholes” that have become a “magnet for illegal immigration.” By law, the U.S. government cannot detain migrant children for more than 20 days, resulting in their and their supposed parents’ release after crossing the border.

The DNA testing program, which department officials told CNN was in response to concerns about human smuggling, will involve migrants being asked to conduct a cheek swab, and to do so for his or her claimed child. According to the company providing the DNA testing technology, the results will be made available in less than two hours.

“This is not screenings, this is not just random application of this,” ICE acting Deputy Director Derek Benner said. “This is a pilot designed to assess the usefulness of this technology in an investigative process.”

Child and migrant advocates have voiced concern that DNA testing would unfairly impact those who travel with adopted children or relatives outside of their nuclear families. There have, however, been allegations of families accepting money to allow non-relatives to cross the border with their children as a way to evade detention, according to the Washington Post.

President Donald Trump, whose campaign was largely centered on clamping down on illegal immigration, is making a renewed push for border security in the run up to his 2020 re-election bid. Arrests at ports of entry have been significantly higher in recent months, skyrocketing to a 12-year high in March.

In a statement emailed to TIME, the American Civil Liberties Union (ACLU) called the pilot an attempt by the Trump administration to intimidate and deter asylum seekers.

On Wednesday, the White House asked Congress for an additional $4.5 billion in emergency spending to fund aid to increase shelter capacity, as well as for operational support and investigative work on smuggling.

Trump also proposed charging migrants a fee to process their applications, insisting that the asylum system is “in crisis” and plagued by “rampant abuse.” 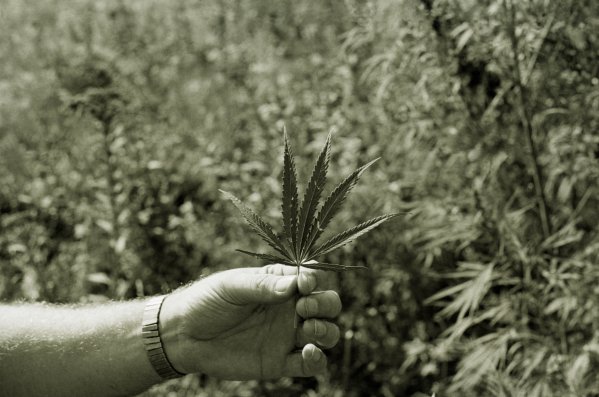 The Surprising Link Between U.S. Marijuana Law and the History of Immigration
Next Up: Editor's Pick