Clashes broke out in Caracas between anti-government protesters and Venezuelan security forces Tuesday after Juan Guaidó, the leader of Venezuela’s opposition-held parliament, called for a military uprising against Nicolás Maduro’s authoritarian regime.

In a video live-streamed on Twitter early Tuesday, Guaidó was seen standing at La Carlota airbase in Caracas, flanked by a few dozen troops who apparently defected from the government and Leopoldo López, an opposition politician. Lopez had been in prison or under house arrest since 2014, after he led a series of protests against the government. He said that members of the military had freed him on Guaidó’s orders.

Maduro’s information minister called the defections “a coup” by “a small group of military traitors” and said the government was putting it down.

The Associated Press reported that troops loyal to Maduro fired tear gas from inside the airbase on to a nearby highway overpass, where Lopez was addressing a crowd of civilians soon after Guaidó’s announcement.

Clashes continued around the city Tuesday, with photos and footage showing military loyal to the government exchanging tear gas canisters with protesters.

In one clip, an armored car appears to plow into a crowd of protesters on a highway, knocking some to the ground.

This new push from Guaidó is an attempt to convince the top military brass to join the opposition to Maduro’s government, Diego Moya-Ocampos, a Venezuela expert at risk analysts IHS Markit, tells TIME.

“It was an effort to catch Maduro’s security forces by surprise and try to activate a spark to escalate protest beyond the capacity of Maduro’s forces to contain them,” he said. “And at the same time secure the support of those members of the armed forces who are increasingly discontent with Maduro over shortages of food, basic goods, electricity and water.”

He adds: “The key indicator to watch now is whether protests escalate beyond the security forces’ ability to contain them and whether Guaidó wins the support of top military commanders.”

Speaking on state television, the ruling Socialist Party’s chief Diosdado Cabello urged supporters of the government to go to the presidential palace in Caracas to “defend the revolution, to defend Nicolas and to defend the legacy of [former president] Hugo Chávez.”

The opposition has called mass anti-government protests for Wednesday, May 1.

Guaidó said he had met with “the main military units” of the armed forces in order to “begin the final phase of Operation Freedom,” referring to the opposition’s attempt to oust Maduro’s regime.

Guaidó and Maduro have been locked in a stand-off over control of Venezuela since January, when Guaidó claimed that Maduro’s second presidential term, won in elections many consider to be rigged, was invalid and constituted a vacuum of power. As parliament leader, the opposition claims the constitution mandates Guaidó temporarily take over the presidency to organize fresh elections.

The U.S. and 50 other mostly western countries have recognized Guaidó as president, while Maduro retains the backing of Russia, China and Turkey.

The military’s continued backing of Maduro has been decisive in keeping him in power. The opposition has so far failed to win over significant number of troops to their cause.

“These have been years of fear,” Guaidó said in the live-stream, referring to the humanitarian and political crisis that has gripped Venezuela since the beginning of its economic collapse in 2014. “That fear ends today. I call on all soldiers, all of our military family, to accompany us in our fight […] on the basis of the constitution, which has always been non-violent.”

Maduro responded to Guaidó’s speech saying he had spoken to commanders of all Venezuela’s regional defense forces and they had “shown their total loyalty to the People, the Constitution and the Country”. He called for a mass demonstration of his supporters to “ensure the triumph of peace.” 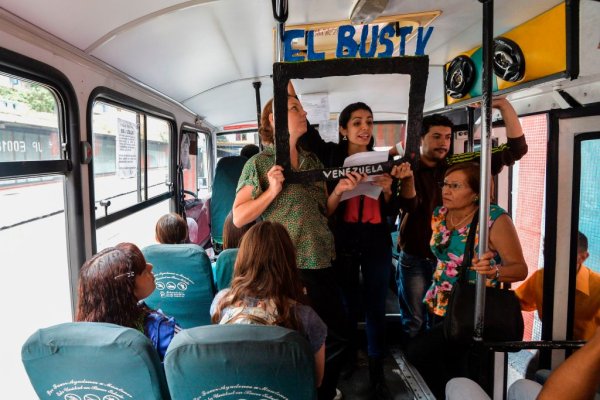 'Venezuelans Are Starving for Information.' The Battle to Get News in a Country in Chaos
Next Up: Editor's Pick