What’s better than one ostentatiously Gucci-clad celebrity on the Met Gala red carpet? How about two — Jared Leto came gloriously attired in a full, campy Gucci look for the 2019 Met Gala red carpet, which he accessorized with none other than a replica of his own head.

Leto’s irreverent accessory is a nod to the severed heads that models carried during the Autumn/Winter 2018 Gucci runway show, which, as might be expected, caused a ruckus online.

It should come as no surprise that Leto showed up in full-look Gucci for the 2019 Metropolitan Museum of Art’s annual Costume Institute Benefit, as he’s fronted many a Gucci campaign as a noted muse and close friend of Gucci creative director and gala co-host Alessandro Michele — so much so, that he wrote Michele’s Time 100 tribute in 2017 and attended the gala last year with him and Lana Del Rey, where all three sported ensembles fit for saints — adhering well with 2018’s Catholicism-inspired theme, Heavenly Bodies: Fashion and the Catholic Imagination.

For this year’s theme, Camp: Notes on Fashion (inspired by Susan Sontag’s iconic 1964 essay, Notes on “Camp”), Leto wore a blood red robe with a crystal harness and carried his replica of his severed head, all made by Gucci.

And here’s what Jared Leto and Lana Del Rey wore at the 2018 Met Gala too. 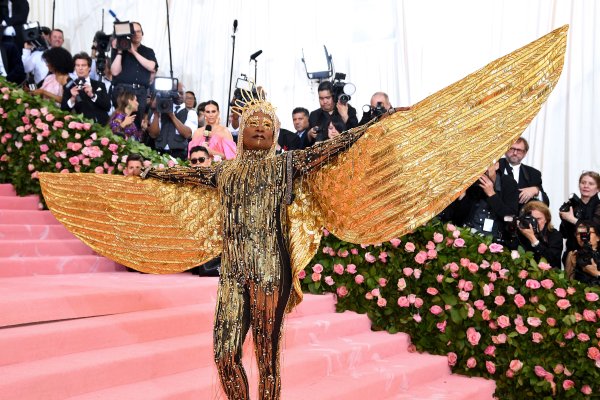 Billy Porter Is a Golden Icon at the 2019 Met Gala
Next Up: Editor's Pick