Serena Williams proved that she was a champ both on and off the tennis court when she took to the 2019 Met Gala red carpet in a bright yellow, floral embellished Atelier Versace gown and a pair of matching Off-White x Nike sneakers at the legendary cultural institution on Monday night.

For Williams, who co-chaired the 2019 Metropolitan Museum of Art’s annual Costume Institute Benefit alongside Anna Wintour, Gucci creative director Alessandro Michele, Harry Styles and Lady Gaga, to pair her Versace gown with a pair of Nike sneakers, was a natural choice, embodying the spirit of the gala’s theme, Camp: Notes on Fashion, which was inspired by Susan Sontag’s iconic 1964 essay, “Notes on “Camp.”

For curious sneaker heads, Williams selected the Volt Off-White x Air Force 1 Nike sneakers under her gown, an inspired choice since Off-White creative director Virgil Abloh’s designs have been in dialogue with current sartorial examples of the camp sensibility and Williams collaborated with Abloh on a special “Queen” collection. Williams also notably attended the Met Gala in an emerald green Atelier Versace gown in 2017, while pregnant with her first child, Alexis Olympia Ohanian. 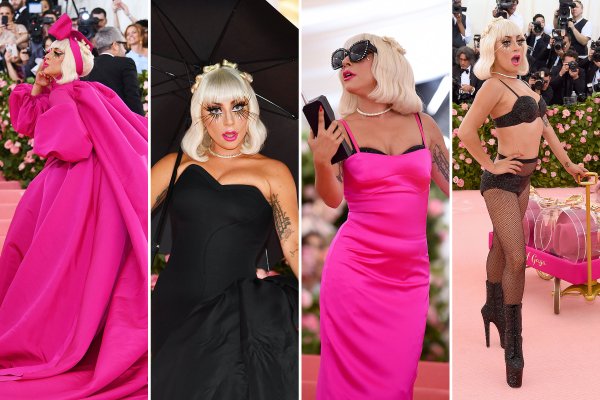 Lady Gaga's Showstopping 2019 Met Gala Entrance Will Leave You at a Loss for Words
Next Up: Editor's Pick