'The Example of Kindness to the Fullest Extent.' Friends and Loved Ones Mourn Synagogue Shooting Victim

Lori Kaye, 60, was killed in a shooting at the Chabad of Poway synagogue in California on April 27.
Audrey Jacobs
By Ciara Nugent

Friends and family are paying tribute to Lori Kaye, who was killed Saturday after a gunman opened fire at the Chabad of Poway synagogue north of San Diego, also injuring three others.

Rabbi Yisroel Goldstein, who was injured in the attack, described Kaye, 60, as “the example of kindness to the fullest extent.”

Here’s what to know about Kaye:

Who was Lori Kaye?

Kaye, a San Diego native, is survived by her husband, a doctor, and a 22-year-old daughter, her friend and fellow congregation member Roneet Lev told CNN.

Another friend, Audrey Jacobs, posted a tribute to Kaye on Facebook: “You were always running to do a mitzvah (good deed) and gave tzedaka (charity) to everyone. Your final good deed was taking the bullets for Rabbi Mendel Goldstein to save his life.”

CNN reports that at a Sunday night vigil for Kaye, Rabbi Goldstein — a longtime friend — said Kaye had been a kind and generous member of the congregation, giving the example of how she had accompanied a woman with breast cancer to her doctor appointments. “She went out of her way until the moment that that woman passed away,” the rabbi said.

Why was Kaye in the synagogue?

Kaye was at the service on Saturday — the last day of Passover — to honor her mother, who had recently died, Lev said. Kaye’s husband and daughter were also at the service.

Rabbi Goldstein told reporters the gunman shot Kaye in the lobby of the synagogue, before turning the gun on him and opening fire. The Rabbi lost a finger, but the shooter’s gun “miraculously jammed,” he said. The gunman fled the scene and later surrendered to police.

In the moments after the shooting, Kaye’s husband was called to help a wounded congregant and fainted when he realized it was his wife, Rabbi Goldstein added.

Lori Kaye was taken to a local hospital, but died shortly thereafter.

Who are the rest of the wounded?

Authorities said 8-year-old Noya Dahan and her 34-year-old uncle, Almog Peretz, sustained shrapnel injuries. Both have been released from the hospital.

Dahan was wounded in the face and leg. Her father Israel Dahan told ABC news that his family moved to California after facing rocket attacks in their former home near the Gaza Strip.

Peretz, who was visiting California from Israel, was hit in the leg and helped children escape through a side door, ABC reports. 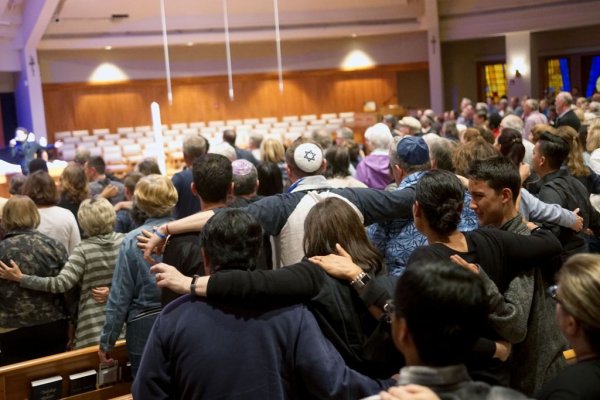 1 Dead, 3 Injured in Synagogue Shooting Near San Diego
Next Up: Editor's Pick