Kim Jong Un sought Vladimir Putin’s help in resolving a nuclear stalemate with the U.S., asking the Russian leader at their first summit to convey his views to Donald Trump.

“Chairman Kim Jong Un himself asked us to inform the American side about his position,” Putin told reporters after more than three hours of talks on a university campus in the Russian Pacific port of Vladivostok. “There are no secrets here. We will discuss this with the Americans and our Chinese partners,” said Putin, who is heading to Beijing later Thursday.

While Russia extended the invitation to Kim almost a year ago, the North Korean leader only accepted after his second summit with Trump broke down in February without agreements on relief from United Nations sanctions that are choking his economy or steps toward Kim’s disarmament. Since then, North Korea has complained that intermediaries to Trump — ranging from U.S. Secretary of State Michael Pompeo to the South Korean government — aren’t getting his message across.

“I had candid and meaningful talks with Putin on developing friendly relations between North Korea and Russia,” Kim said at a reception with his Russian counterpart after the meetings.

For Putin, hosting Kim gives him a chance to remain a player in a security dispute shaped mainly by the U.S. and China. The Russian trip advances Kim’s efforts to break his country’s isolation. After ruling for six years without leaving home, he’s visited five nations since his rapprochement with Trump, including China, Russia, Singapore, Vietnam and a short hop over the South Korean border.

Kim, who kept Putin waiting almost a year for the summit, was also more than 30 minutes behind the Russian president’s arrival at the venue. That was an unusual turnabout for Putin, who’s notorious for keeping world leaders waiting for meetings.

“We welcome your efforts to develop inter-Korean dialogue and to normalize North Korean and American relations,” Putin told Kim.

Neither side released details of what was discussed at the meetings, which appeared cordial. Putin said he shares the U.S. desire to see full denuclearization, but added that North Korea would need security guarantees, most likely international, to protect its sovereignty. He said a return to six-party talks, an arrangement that included Russia and Japan, as well as China, the U.S. and the two Koreas, could be useful for that.

Kim, who arrived aboard an armored train Wednesday, hasn’t met with the Russian leader since coming to power in 2011. But ties between Moscow and Pyongyang run deep with Soviet leader Joseph Stalin helping Kim’s grandfather, Kim Il Sung, set up the Democratic People’s Republic of Korea in the aftermath of World War II.

“If the Hanoi summit had gone well, North Korea would not have needed to visit Russia,” said Kim Sung-han, dean of Korea University’s Graduate School of International Studies in Seoul and a former vice minister at the South Korean Ministry of Foreign Affairs, referring to Kim’s failed meeting with Trump in February.

Boxed in by Trump, Kim Jong Un Buys Time With Nod to 2020

The Russia trip comes after Kim gave a speech at the country’s rubber-stamp parliament this month where he said he is willing to meet Trump again as long as the U.S. offers acceptable terms for a deal by year end.

For North Korea, “Russia doesn’t have the capacity to replace China,” said Kim, the former vice foreign minister. “Internally, it will help Kim show off his leadership to domestic elites but unless the trip generates tangible and physical support, it is just abstract.”

Putin suggested a compromise could be possible on North Korean migrant workers in Russia, an important source of income for the Pyongyang government that’s due to be cut off at the end of this year under UN sanctions. He didn’t elaborate, however.

“This is essentially a side-show in the continuing saga between Pyongyang and Washington,” Dmitri Trenin, head of the Moscow Carnegie Center, wrote on Twitter. “Russia will seek to score diplomatic points by demonstrating its relevance; North Korea, by showing it has options.” 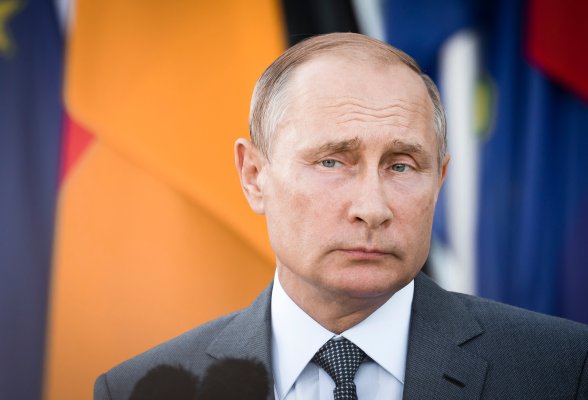