Taylor Swift and Emilia Clarke at the Time 100 Gala at Jazz at Lincoln Center in New York City on April 23, 2019.
Kevin Tachman for TIME
By Raisa Bruner

The characters: one Taylor Swift, pop icon, and one Emilia Clarke, Game of Thrones actress and well-known Mother of Dragons. The occasion: the 2019 TIME 100 Gala in New York City, celebrating TIME’s annual selection of 100 of the most influential people in the world — Clarke and Swift included. The moment: when the two superstars met, sparking the internet’s immediate infatuation.

Swift, who attended the gala to perform an acoustic set of songs for her fellow honorees, was captured on camera connecting with Clarke, who famously plays Daenerys Targaryen in the HBO hit show, in a candid moment during the evening’s festivities. Both women were dressed in voluminous gowns fit for princesses — Swift’s a diaphanous pale pink, to go along with the theme of her new aesthetic era, while Clarke’s was a vibrant red, perhaps winking at her role as the fiery khaleesi and Mother of Dragons. In the photo, we can see Clarke crouching down to chat with Swift, positioned on a lower level of the event space beneath a railing. Naturally, fans have to be curious: what did they discuss? Both have some serious secrets they’re currently hiding; Clarke has to keep her lips sealed about the ultimate ending of the eighth and final season of Thrones, while Swift has been teasing a new phase of her own career and image on social media for months, with new music potentially coming out later this week — if her mysterious countdown clock is any indication.

While we may never know if they finally spilled these secrets to each other — or had other matters to discuss — at least the internet now has photo evidence of this momentous meet-up of pop culture royalty. 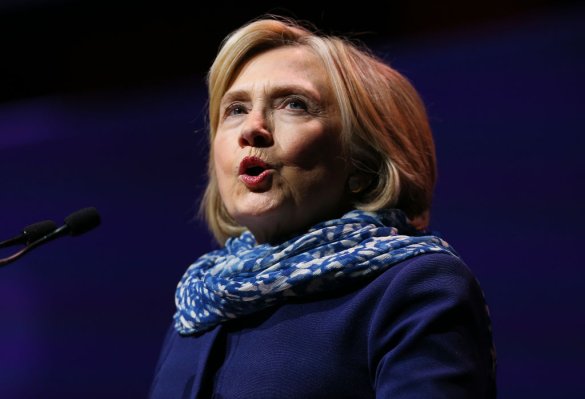 Hillary Clinton to Speak at the TIME 100 Summit on April 23 in New York, NY
Next Up: Editor's Pick