Joe Biden Starts His Campaign as the Frontrunner. That Could Hurt Him

On paper, Joe Biden has about as many advantages as a presidential candidate could want. A former vice president, he has national name recognition, a strong connection to a popular former president, longstanding ties to major donors, good relations with Republican lawmakers and the top spot in most recent polls.

But in practice, many of those strengths may turn out to be weaknesses as Biden’s third presidential campaign gets underway this week.

Biden’s name recognition also means many voters already have formed an opinion on him, which gives him less room to grow than the much less well-known field of contenders in the Democratic primary. More than 80 percent of Democrats in a recent Reuters poll said they were at least “somewhat familiar” with him.

By comparison, relative unknown South Bend, Ind. Mayor Pete Buttigieg has shot up to third place in some recent polls after strong performances in TV interviews and on the hustings. A core source of Buttigieg’s rise? Former Biden supporters.

In the interim, Biden’s ties to Barack Obama may not mean as much in a field where African-American voters can pick from Sens. Kamala Harris and Cory Booker and may hurt him among Hispanic voters who weren’t exactly keen on the president’s record on deportations.

While upstart candidates like former HUD Secretary Julian Castro and Washington Gov. Jay Inslee have built grassroots support in order to reach a 65,000-donor threshold to participate in Democratic primary debates, Biden is already a sure thing for the debate stage and has done little outreach on Facebook and other platforms to build his small-donor base.

Biden’s long career in politics and his history of bipartisan outreach has already stung him, too, with his treatment of Anita Hill during the Clarence Thomas Supreme Court confirmation, his hands-on style of voter outreach and his past stances on criminal justice issues raising questions before he’s even joined the race.

In other words, it’s tough to imagine a frontrunner for a presidential nomination on such shaky footing. The scaffolding holding Biden up may, at any inflection point of this campaign, come crashing down. As one former aide put it, the best day of the Biden campaign will be the day he launches, and from there is stands to get worse.

Biden advisers say they recognize these challenges, but their central worry for now is money.

After joining the race on Thursday, Biden will have to race to catch up to his rivals. The New York Times recently noted that for Biden to catch up with what Bernie Sanders has already banked, he will have to raise $100,000 a day through Christmas to reach parity. And with donations capped at $2,800 per person, that’s a lot of time on phone calls and picking at cheese plates.

And, as much as his public persona suggests Biden enjoys the one-on-one campaign moments, he privately hates doing it with donors.

Which leaves many Biden boosters worried about his next few months, especially for the debates. His last true debate was in 2012 and he came off as smug and condescending to GOP vice presidential nominee Paul Ryan. With a stage likely to be filled with women and minorities, a mansplaining Uncle Joe could be a very bad look on him. Add in there the risk of a whiff of arrogance as an elder statesman in an era of fresh faces and Biden could be running headlong into a political wood-chipper.

“The Vice President loves debate prep,” says one former adviser. “He thinks it’s a blast, standing up there, having his record attacked. I’m not sure he’s going to love it when every day, starting with his launch, it will be a sustained series of tough questions about that record. And it won’t be Sarah Palin or Paul Ryan this time. It’ll be people he likes and respects challenging him.”

Internally, Team Joe knows it has problems. Biden himself is a classic, old-school politician. If things go as planned, Biden will meet with donors on Friday and then appear at a union hall in Pittsburgh on … Monday? Rather than emulate other candidates who announce, rally and blitz cable, Biden seems to be going a decidedly throwback route, one that has some of his younger aides nervous.

But Biden has made clear to his team that this is his campaign and it’s his name on the theoretical bumper stickers that, to Biden, are a stand-in for grassroots backing. History will judge him and not the aides. Biden is well aware that this is likely his final crossroads in American politics and likely to decide the first line of his obituary. So if he wants to do things his way, aides are going to get out of his way.

Behind the scenes, Biden’s team has been quietly assembling an organization that would be a shell of what is to come. Hiring has been slower than expected, largely because Biden’s entrance into the races has been repeatedly pushed back. First, he was going to decide over the December holidays, then during the first quarter of the year, and now it is nearing the end of April. He had planned to announce on Wednesday but his team realized it stood to steal headlines from a conference for women of color taking place that day. There are at least two versions of his announcement video.

Privately, Biden has been smarting about some of the coverage of his record, especially from journalists he considers friendly. His record in regards to race and to women is getting closer looks. Biden found it deeply unfair that, according to the Washington Post, a fellow Democrat flagged for the newspaper an interview he gave opposing school desegregation by bussing students to other buildings. His handling of Thomas’ confirmation hearings isn’t exactly a proud moment for him, either, and criticism of his sometimes too-close physicality is, to his mind, overblown and a ridiculous distraction from Trump’s conduct.

Advisers have urged Biden to ignore much of that, arguing that it’s tame compared to the type of scrutiny that is to come when he joins the race as a frontrunner. Their message to him to focus on what lies ahead and is fixable. His fundraising numbers will be studied and coming up short to someone like relative newcomer Beto O’Rourke will be embarrassing. His online presence, which at the moment is close to zilch, is badly lacking even start-up efforts from the likes of Tim Ryan. And his crowd sizes will inevitably be compared to the launches of Harris and Elizabeth Warren.

Then, there’s Biden’s immutable personality. Democrats will have to ask themselves if Biden is really the vessel for their Trump-defeating dreams. Biden has said he wants to beat up the President, but is Biden really the best person to counter-punch Trump, who has shown no peers in his ability to rewrite the rules of politics?

It’s still nine months before Iowa kicks off the process with its caucuses and almost 300 news cycles. Biden is sure to dominate a good many of them by dint of his polling advantage and his deep knowledge of policy. And yet, some fear, he will be in the headlines for the wrong reasons, such as lackluster fundraising or one of his legendary gaffes.

As Biden spends his last few hours before beginning the hardest job interview on the planet, his advisers are urging him to remember that he is beginning the race not just the frontrunner but also the man everyone else needs to take down if they are to win. 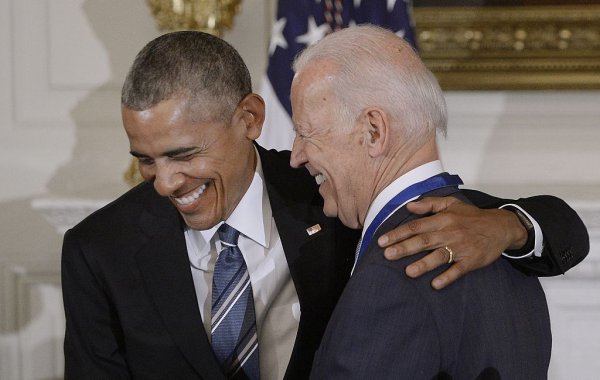 Why Obama Won't Endorse Biden for President
Next Up: Editor's Pick