Why This Wildly Successful 'Jeopardy!' Contestant Wants a New Star to 'Take a Swing' at His Record

Ken Jennings, who has held the title of the longest Jeopardy! winning streak for the past 15 years, is rooting for the show’s new wunderkind, James Holzhauer to break his legendary record.

Jennings, who went on a 74-game winning streak in 2004 and winning $2,520,700 along the way, revealed in an interview with Wired that he was incredibly impressed with Holzhauer’s 12-episode and $850,000 run so far, a rate that will match his winnings with Jennings in less than half the time if his winning streak continues.

“First of all, I’m just gobsmacked by James. It’s absolutely insane what he’s doing,” Jennings said. “This is something I would have thought was just impossible, these numbers. Statistically, he’s playing at as high a level as anyone who’s ever played the game. And then he’s got these incredibly confident wagers. He’s maximizing money. He can make two or three times what any other player ever has with that same level of play, which again is top-shelf. He’s as good as anybody. I’ve always wanted to see somebody play that way, you know?”

Holzhauer, who uses his experience as a professional sports gambler, along with his deep trivia knowledge, as part of his Jeopardy! strategy, has expressed that he’d love to compete against Jennings in the future. Jennings, for his part, isn’t precious about his Jeopardy! record and expressed surprise that it still hasn’t been broken.

“I’m very excited. As a fan of the show, I’m actually rooting for James or anybody who can take a swing at that record. It’s bizarre to me that it’s still a one-off.” 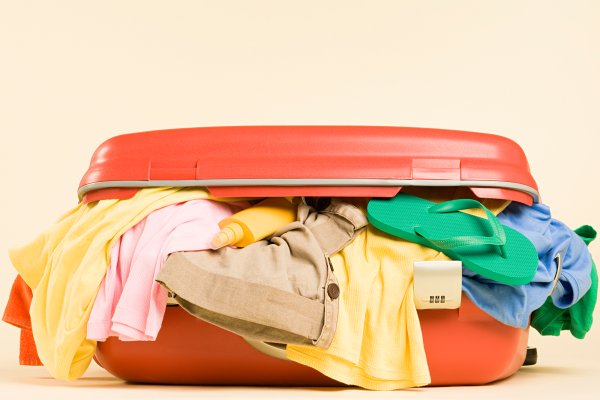 'I Was Boiling.' Woman Wears All of Her Clothes to Avoid an Extra Baggage Fee
Next Up: Editor's Pick