The Internet Is in Agreement. Tormund Is the Mood-Lightening MVP of Game of Thrones

Tormund Giantsbane, Game of Thrones’ bearded ginger Wildling with a heart of gold, might have had the funniest moment in the show’s history when he attempted to woo Brienne of Tarth, the subject of his unrequited love, with a truly absurd tall tale of an origin story.

In the second episode of Game of Thrones‘ eighth and final season, ahead of what’s sure to be a battle to remember, those in Winterfell are engaging in some serious heart-to-hearts, as many are wont to do before they fight an army of White Walkers.

For Tormund, his touchy-feely moment comes in the form of a drunken fireside chat with Tyrion, Jaime, Podrick, Davos, and his main crush, Brienne. During the course of this intimate party, Tormund enthusiastically cheers on as Brienne gets knighted by Jaime and then tells everyone the story of how he got his name. According to Tormund, he killed a giant at the age of 10, then suckles on the giant’s widow for three months afterwards, leading to him becoming stronger and bigger than others.

“That’s how I got so strong: giant’s milk,” he notes laconically, while making eyes at Brienne.

As might be expected, this outrageous tale hardly made Brienne swoon over Tormund, as he might have wanted, but it did endear him to the Internet, who showed him plenty of love for his fireside antics.

Here’s to Tormund, the ray of sunshine we desperately need going into the final season of Game of Thrones. 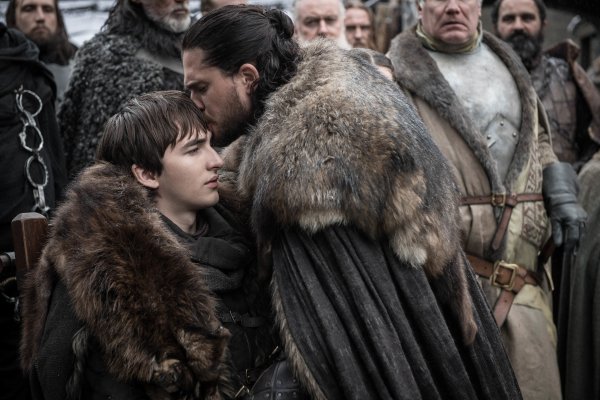 Bran Stark's Intense Stare in the Season 8 Premiere of Game of Thrones Is the Best Meme in the Seven Kingdoms
Next Up: Editor's Pick