The State Department issued a revised travel advisory for Sri Lanka on Sunday, warning that “terrorist groups continue plotting” possible attacks in the wake of the deadly Easter blasts that killed 290 people.

“Terrorists may attack with little or no warning,” the updated travel warning reads. It adds that places of worship, tourist locations, transportation hubs, hotels, shopping malls, airports and other public areas may be be targeted. According to the State Department, the advisory level for Sri Lanka has been raised to a level 2.

Those traveling to Sri Lanka are advised to use “increased caution,” to monitor local media for breaking events and to have a contingency plan for emergencies.

Sunday’s deadly bombings, which also wounded more than 500 people, centered on churches and hotels in the capital Colombo and two other cities. While the majority of the victims were Sri Lankans, up to 35 foreigners, including Americans, are believed to have died in the deadliest spate of attacks to hit the South Asian nation since the end of a civil war a decade ago.

In a statement, Secretary of State Mike Pompeo confirmed that “several” Americans had died and condemned the “terror attacks.”

While no group has yet to come forward to claim responsibility, seven suicide bombers from a domestic militant group known as National Thowfeek Jamaath have been linked to the attacks, Health Minister Rajitha Senaratne said Monday, according to the Associated Press. 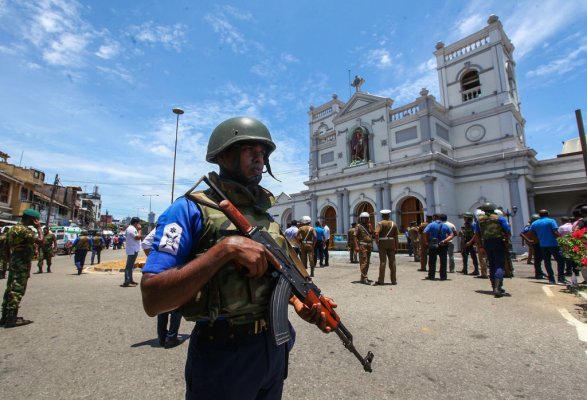 World Leaders Respond to the Easter Sunday Bombings in Sri Lanka That Killed at Least 200 People
Next Up: Editor's Pick