On Sunday night’s episode of Last Week Tonight, John Oliver continued his investigation into what he calls “Stupid Watergate” in light of the release of Special Counsel Robert Mueller’s report on Russian interference in the 2016 presidential election. While Attorney General William Barr’s preliminary summary of the report made it seem that Mueller’s investigation completely exonerated the president, Oliver disagreed. “Once the Mueller Report had actually been read,” Oliver told his audience, “it became clear that there was a lot in it.”

In Oliver’s summation of the “incredible” report, Trump’s main defenses against obstruction of justice and collusion were “incompetence” and “disobedience”.

For example, Trump’s personal attorney Michael Cohen attempted to reach out to Russian President Vladimir Putin’s press spokesman Dmitry Peskov, but sent the email to the wrong address. And at one point, Oliver noted, Cohen seemed to think Russian communications officer Dmitry Klokov — who had reached out to Ivanka Trump and the campaign — was actually an Olympic weightlifter of the same name. As Oliver noted, “When it comes to conspiracy, Trump’s saving grace may have been that, despite Russians wanting to help, everyone around them was too inept to work with them.”

Trump’s other saving grace, according to Oliver, was that his own staff frequently disobeyed or outright ignored him. “The news that the President ordered subordinates to do things that might constitute obstruction, and then they just ignored him, is both reassuring and also terrifying,” Oliver said. 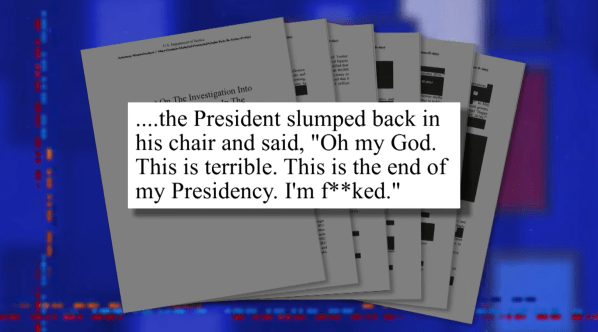