Game of Thrones may have just dropped a major hint about whether Jon Snow or Daenerys Tagaryen might have to choose between each other and the Iron Throne after the war.

It all starts with that miserable-sounding tune Podrick Payne (Daniel Portman) sang during “A Knight of the Seven Kingdoms,” the second episode of season 8. The song, as imagined by Florence and the Machine, also plays over the episode’s closing credits.

It’s called “Jenny’s Song,” and fans of the books were quick to recognize it from A Storm of Swords, installment number three of George R. R. Martin’s A Song of Ice and Fire books. It pops up a number of times, the most prominent of which is when Arya hears it during her time with the Brotherhood Without Banners.

You can read the lyrics to the haunting ballad in full below.

During the episode, Tyrion, Jaime, Brienne, Podrick, Davos, and Tormund are drinking by the fire as they mentally prepare for the coming battle. After all, the group is sure they’ll die fighting the next day. Always happy to try to lighten the mood over a drink with friends, Tyrion asks if anyone knows a song.

Game of Thrones has used music as a storytelling device throughout the entire series. Look no further than “The Bear and the Maiden Fair” for a song that tipped a hat to Jaime and Brienne. And remember “The Rains of Castamere” from the Red Wedding?

What is the meaning of “Jenny’s Song?”

Unsurprisingly, “Jenny’s Song” is about a person named Jenny: Jenny of Oldstones to be exact. Her storyline takes place before the events of the television series. She was a commoner who married Prince Duncan Targaryen, the Prince of Dragonflies, which makes him an ancestor of Jon and Dany’s. He’s Daenerys Targaryen’s great uncle who was also known for being rebellious.

He defies his father’s wishes and marries Jenny for love. In the end, he has to give up his rightful claim to the throne for her. Eventually, their story ends in tragedy. Both the Prince of Duncan and Jenny die in the dragon summoning-related fire of Summerhall, the Targaryen castle, which explains the song’s melancholy vibe.

Some speculate that this song could be a sign that Jon or the Mother of Dragons might end up choosing love over the crown. Jon has consistently demonstrated he has no interest in taking his place on the pointy chair, while it’s all Daenerys has talked about for much of the series.

What does Jenny’s song have to do with the Prince That Was Promised?

In the books, Arya meets a woods witch called the ghost of High Heart who requests to hear the sad song.

Some fans have theorized that the witch is actually the ghost of Jenny. That may or not be true. But what we do know is this witch has an excellent track record when it comes to predicting the future. She shares her “dreams” with the Brotherhood Without Banners, sharing details about the Red and Purple weddings that end up being right on the money. At one point, she shares a “dream” about “a maid at a feast with purple serpents in her hair, venom dripping from their fangs.” This turns out to be a reference to Sansa killing Joffrey at the the Purple wedding.

Most importantly, she declares that the widely speculated messiah-like savior of this story, the Prince That Was Promised, Azor Ahai, would be a Targaryen hailing from the line of Rhaella Targaryen and Aerys (the Mad King.) So that means, if she’s right about this one, the prince could be Dany, Jon, or even a child of their own — if they have one.

Some fans even believe that it was Rhaegar who created the song. To top it all off, Daenerys mentions that Rhaegar “liked to sing” near the end of the episode. That was all the fans who theorize that Rhaegar created and sang the the tearjerker needed.

Florence and the Machine created a rendition of the Jenny of Oldstone song for season 8, which played over the closing credits of the episode. You can see a lyric YouTube video of Jenny’s Song below.

While the show often hews closely to the spirit of the books, in HBO’s post-episode breakdown, showrunners David Benioff and D.B. explained that they beefed up the song with some never-heard-before lyrics for the show. 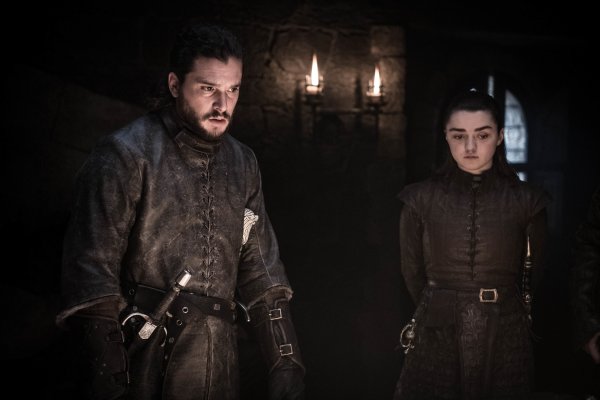 Here's Who Has a Valyrian Steel Sword Leading Up to the Battle of Winterfell on Game of Thrones
Next Up: Editor's Pick