At least 207 people have been killed and 450 more wounded following a series of explosions in Sri Lanka. The blasts took place in the capital Colombo, a town north of the capital and a town on the island nation’s east coast, targeting churches, hotels and a housing development.

In the wake of the tragedy, leaders around the world offered an outpouring of support to the people of Sri Lanka.

President Donald Trump offered a message of support to Sri Lanka Sunday morning over Twitter. “The United States offers heartfelt condolences to the great people of Sri Lanka,” the President tweeted. “We stand ready to help!”

The President’s message was a correction of an earlier tweet, which stated that the explosions had “killed at least 138 million people and badly injured 600 more.”

Other leaders around the world also offered condemnations of the attacks and expressions of support.

Scott Morrison, the prime minister of Australia, denounced the attacks and offered a message to Sri Lanka in a recorded statement on Sunday. “To the beautiful people of Sri Lanka, Australia sends its heartfelt sympathies and our prayers and our support and our offer to do whatever we can to support you in this terrible time of need.”

“Canada strongly condemns the heinous attacks on Christians at churches and hotels,” wrote Canadian Prime Minister Justin Trudeau. “Our hearts and thoughts are with the families and loved ones of those killed and all those injured.”

UK Prime Minister Theresa May also condemned the horrific attacks. “The acts of violence against churches and hotels in Sri Lanka are truly appalling, and my deepest sympathies go out to all of those affected at this tragic time,” she wrote. “We must stand together to make sure that no one should ever have to practice their faith in fear.”

“We are deeply saddened by the terrorist attacks against churches and hotels in Sri Lanka,” wrote French President Emmanuel Macron. “We firmly condemn these odious acts. We stand by the people of Sri Lanka and our thoughts go out to the loved ones of the victims on this Easter Sunday.”

Former President Barack Obama also offered his support on Sunday morning following the attacks. “The attacks on tourists and Easter worshippers in Sri Lanka are an attack on humanity,” he wrote. “On a day devoted to love, redemption and renewal, we pray for the victims and stand with the people of Sri Lanka.”

“There is no place for such barbarism in our region,” wrote Indian Prime Minister Chowkidar Narendra Modi. “India stands in solidarity with the people of Sri Lanka. My thoughts are with the bereaved families and prayers with the injured.” 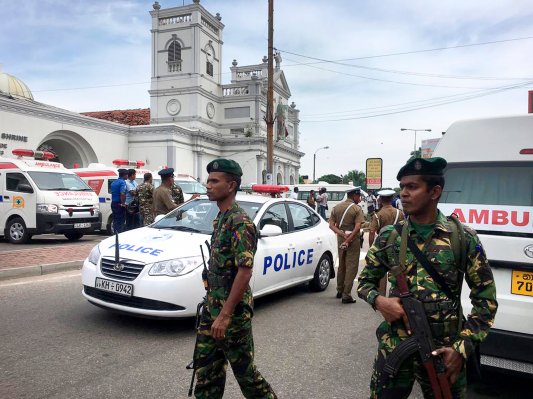 Sri Lanka Bombings: What to Know
Next Up: Editor's Pick