The Mueller Probe Made Them Famous. They Plan to Keep Cashing In

John Schindler, a former U.S. counterintelligence analyst, raked in tens of thousands of dollars in subscriptions to his exclusive feed, @thespybrief, where he issued conspiratorial musings about the probe.

And Seth Abramson, an assistant professor at the University of New Hampshire known for his infamously long Twitter threads about Trump and Russia, leveraged his online following into two book deals with major publishers.

You might think the release of Mueller’s report on Thursday would slow the gold rush to a trickle. But the motley cast of characters who capitalized on the probe aren’t giving up so easy.

“The Mueller report coming out is just going to be the beginning of a new chapter,” Papadopoulos tells TIME. “People are very fascinated about what I have to say.”

The 31-year-old former campaign adviser, who was charged by Mueller’s team with lying to federal investigators and served time in jail, is hoping the ongoing interest will provide a platform for his newly elevated profile. He’s currently on a book tour to promote “Deep State Target: How I Got Caught in the Crosshairs of the Plot to Bring Down President Trump,” and says he’s mulling a run for Congress. And he’s in the middle of filming a documentary series about his life “pre-Mueller and post-Mueller” with his wife Simona, an Italian actress and model, which he says will explore “the human toll of the investigation…coming soon to a TV near you.”

Page, another former Trump campaign aide scrutinized for his ties to Russia, is also counting on Americans’ continued addiction to the story. He tells TIME he has several upcoming “book-related meetings” in New York, and hopes to revive a proposal he put on hold in 2017. At the time, he promised that it would “serve as the definitive account of many of the problems that led to today’s ongoing controversies both during the 2016 election saga and throughout the dramatic months since.”

It’s not just former campaign aides who want to keep the spotlight on Mueller’s investigation as long as possible. Dan Bongino, a former Secret Service agent and frequent Fox News commentator, parlayed his bombastic defense of Trump into a book: “Spygate: The Attempted Sabotage of Donald J. Trump.” A sequel, entitled “Exonerated: The Failed Takedown of President Donald Trump by the Swamp,” is due out in the fall.

Then there are a host of citizen journalists and conspiracy theorists who built large audiences through their obsessive dissections of the latest developments in the Mueller probe—and their predictions of Trump’s pending impeachment. Despite being widely ridiculed for inaccurate reports, Louise Mensch, a British blogger and former member of Parliament, still has 288,000 followers on Twitter and collects donations through a link on her website.

It remains to be seen whether the cash flow will dry up after the publication of Mueller’s report. But some experts are skeptical.

“I think this cottage industry of interpreters and insiders isn’t going to disappear just because we have a redacted Mueller report,” said Aram Sinnreich, chair of communication studies at American University in Washington. “They’re cashing in on the collective uncertainty we’ve been in since November 2016, and some of them are more ethical than others – some have actual expertise, others are straight up disinformation propaganda or opportunistic nothings.” As Sinnreich notes: “There are still Watergate conspirators making money off their experience and being invited on Sunday morning shows, writing articles and op-eds.”

With 655,000 Twitter followers, Abramson is among the most prominent of the online Russia sleuths. In an interview, he downplayed the release of the document. “My job as a curatorial journalist is to continue to follow the story I’ve been following for two years, and nothing that happens will change that,” the author of “Proof of Collusion: How Trump betrayed America” and the upcoming “Proof of Conspiracy: How Trump’s International Collusion Is Threatening American Democracy,” told TIME the day before the release of a report that found proof of neither.

That didn’t seem to dampen the enthusiasm of Abramson’s fans, who begged him for play-by-play analysis. As the nation pored over Mueller’s 448-page report, Abramson delivered a marathon 451-tweet thread, the top of which had been shared more than 18,000 times by Friday afternoon. In it, he promoted his books more than two-dozen times. 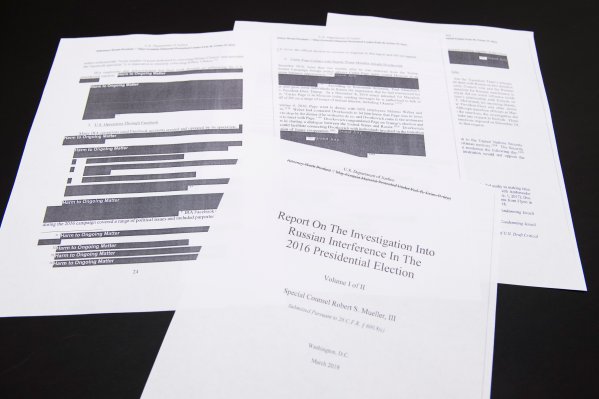 It’s Not All About Trump. The Mueller Report Has a Message for You, Too
Next Up: Editor's Pick