Joe Biden Will Announce His Presidential Campaign Next Week, Unless He Doesn't, But He Probably Will

Former Vice President Joe Biden has recorded a video near his childhood home that will launch the third attempt at the Democratic presidential nomination in his long career.

As of midday Friday, the plan was for him to post the video on Wednesday.

As has been the case with so many pieces of Biden’s political planning, things can change quickly, stall out or be slow-walked for weeks, however. There remains an internal debate about what to do after the video posts — if, indeed, it posts on Wednesday as planned, or moves to another date.

“Things,” as one Biden adviser dryly put it, “are fluid.”

The leading option is for a post-video rally in Charlottesville, Va., where a demonstration by white supremacists left one dead and earned President Donald Trump’s tacit endorsement when he said there were good people in the crowd. Another option is in Delaware, a state he represented in the Senate from 1972 until his election as Barack Obama’s loyal lieutenant in 2008. And there are still talks about him channeling “Rocky” on the famous steps of Philadelphia’s art museum.

“I’ve never seen anything so half-assed,” a former Biden aide said. “They’re improvising and doing last-minute planning. The guy has been running for President since 1987 and can’t figure the basics out, like where to stand on his first day? This should make everyone very nervous.”

Added a second Biden insider: “The guy’s best day is the day he announces. Everything after that gets worse.”

Biden’s dreams of becoming President are legendary. He ran for the 1988 nomination but it was, at best, an uneasy effort marred by an inability to ever find solid footing as fended off allegations of plagiarism and academic fraud. He tried again in 2008, dropping out after a fifth-place showing in leadoff Iowa. Obama forged a sincere partnership with Biden and placed him on the ticket later in 2008 and used Biden as his top adviser on all matters, although Obama and his inner circle were carried deep apprehension about Biden seeking the nomination as Obama’s heir.

Read More: This Is What Happened the First Time Joe Biden Ran for President

Biden ultimately decided against running in 2016, citing in part the sincere grief he was working through after the death of his son, Beau, after an intense fight with brain cancer. Obama in the Oval Office reviewed Biden’s remarks bowing out of a race he never joined. But Biden still harbored doubts that had he run, he could have defeated Donald Trump.

The political environment hasn’t become friendlier for Biden in the intervening years. A rise of far-left activism has given hope to candidates like Bernie Sanders and Elizabeth Warren. The finally realized political power of African-Americans, especially female African-Americans in the Democratic primary, is helping candidates like Kamala Harris and Cory Booker — and would-be contenders like Stacey Abrams — credibility in seeking the nomination. And a desire for something other than a straight white man is opening doors for the likes of Kirsten Gillibrand, Pete Buttigieg and Julian Castro.

But, Biden advisers say, sees a pathway to the nomination via middle-of-the-road, pragmatic-yet-progressive policies. Biden is an unrivaled connector to white, working-class voters. He should have a baked-in constituency among Establishment-minded donors. And he does enjoy solid relationships with African-American leaders, even if some of his loyalists worry about those links’ durability.

Still, Biden’s odds are far from certain. Women have come forward to say his habit of invading personal space made them feel uncomfortable. (Biden has since apologized for his physicality.) There are persistent questions about how he funds the campaign; he notoriously loathes asking supporters for cash and sees it as beneath his stature as a lion of his party’s vanguard.

Parts of his deep history are problematic, such as his tough-on-crime stances now seen as racist and his handling of Anita Hill’s testimony during Clarence Thomas’ confirmation to the Supreme Court. Biden has shown little evidence he has developed the discipline needed in today’s intense media environment. For instance, days after he posted an apology video on his social media accounts for not respecting women’s space, he cracked two jokes about it at a union event with firefighters.

One would-be Biden supporter pointed to an eerily prescient passage from journalist Richard Ben Cramer’s seminal “What It Takes” about the 1988 campaign. At one point during that race, Biden was bleeding support. As Cramer began a chapter titled “Biden’s Waterloo?”: “How could he stop it? His campaign was hemorrhaging.” Amid endless challenges to his credibility, it was Beau Biden who confronted his father and urged him to keep campaigning. “If you quit now, people will think that all that stuff about you is true,” Beau Biden told his father in Cramer’s account.

That same argument now is being deployed by Biden advisers confronting questions about his conduct with women.

Some Biden boosters also worry that even in Biden’s launch discussion, so much of his focus is making it easy on Washington-based reporters to attend the launch events. “He will forever be an Amtrak guy,” says a third Biden insider, another former aide. “He sees the political universe as centered in D.C., and you’re not going to reprogram him. He wants the ‘Meet the Press’ crowd there.”

Biden allies say he has built as much of a campaign-in-waiting as he can without any mechanism to actually do so. He lacks an active federal political machine, so he is limited in how much he can commit to in the lead-up to the race. He has scouted campaign offices and tentatively lined up top hires. But many of his would-be aides are operating on handshake agreements while others grew tired of waiting for him to pull the trigger.

The initial plan was for a second-quarter launch, so he could maximize his fundraising potential. That window opened on April 1, and Biden has now squandered three weeks of that.

A Biden spokesman did not respond to a request for comment. 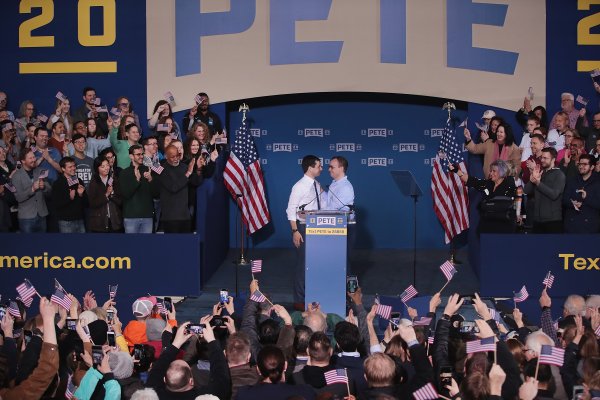 Pete Buttigieg Enters Presidential Race With a Message of Generational Change
Next Up: Editor's Pick