A car passes a poster by the anti-brexit campaign group 'Border communities against Brexit' on the road between Omeath and Newry, as it crosses the border between the Republic of Ireland and the United Kingdom.
NurPhoto—NurPhoto via Getty Images
By Mahita Gajanan

Calls for peace in Northern Ireland have begun anew after a journalist was killed during rioting in Derry on April 18 amid a recent rise of violence in the region.

Lyra McKee, 29, was shot dead in Derry, Northern Ireland (also called Londonderry) during rioting in the city. She was likely struck by a bullet aimed at officers by a masked gunman, police say. A group named the New IRA admitted responsibility for her death. The same group is also thought to have been responsible for a car bomb in the city in January.

McKee’s killing is a reminder of the unease that remains in the region since the conflict over Northern Ireland’s constitutional status and other issues, known as the Troubles, came to an end with the 1998 Good Friday Agreement. About 3,700 people died in the three decades of violent sectarian conflict during the Troubles which was fueled by and exacerbated tensions between Northern Ireland’s Catholic and Protestant communities. Derry, where the 1972 Bloody Sunday massacre — during which British soldiers shot dead 13 people — was a hotbed for fighting.

“Lyra was only a kid when [the agreement] was signed, and was one of that generation that didn’t have direct experience of the political violence and militarization,” says Conor Patterson, the director of the chamber of commerce and trade in Newry, Northern Ireland. “The awful event of her murder exposes the random, chaotic nature of this.”

Still, despite the peace deal, tensions have long simmered between Northern Ireland’s political and religious communities, making the area volatile and ripe for the re-emergence of conflict. The leftover animosity stems in part from a lack of any real reconciliation between Protestants and Catholics beyond the official agreement, according to Roger Mac Ginty, a professor at Durham University focused on peace and conflict. He says local political parties that stoke identity-based conflicts are to blame for the situation.

“Identity-based political parties would put themselves out of business if they took reconciliation seriously. So they have worked to thwart any reconciliation initiatives,” he tells TIME via email. “In this atmosphere, violent actors are left with space to operate.”

In the aftermath of McKee’s death, police in Northern Ireland said they suspected the dissident republican New IRA group is responsible. The organization, formed between 2011 and 2012, is a collection of various armed groups that oppose the Good Friday Agreement peace deal.

“We believe this to be a terrorist act. We believe it has been carried out by violent dissident republicans. Our assessment at this time is that the New IRA are most likely to be the ones behind this and that forms our primary line of inquiry,” Mark Hamilton, assistant chief constable for the police service of Northern Ireland, told reporters on April 19.

The New IRA claimed responsibility for McKee’s death in a statement to The Irish News on Monday. “In the course of attacking the enemy, Lyra McKee was killed while standing beside enemy forces,” the statement read. “The IRA offer our full and sincere apologies to the partner, family and friends of Lyra McKee for her death.”

Leaders from both sides of the border and across the political divides joined together to condemn the attack and call for peace. “We cannot allow those who want to propagate violence, fear and hate to drag us back to the past,” said Republic of Ireland Prime Minister Leo Varadkar.

While violence has not reached the levels experienced during the Troubles, a number of recent incidents has led to concerns about the region’s stability. “I said in January, the threat level in Northern Ireland has been severe for a number of years,” Hamilton said. “That remains extant. It is still severe.” Indeed, four men were arrested in connection with a car bombing in January in Derry. Police said the men were suspected to be a part of the New IRA dissident group, which has also carried out other random bombings and been linked to four murders, including McKee’s death, The Irish Times reports. In 2016, the group took responsibility for the murder of a prison officer who died after being injured in a car bomb attack in Belfast.

Still, Mac Ginty says the all-out violence experienced during the decades-long Troubles is not likely to return. Neither of Northern Ireland’s divided communities has a strong enough support base to carry out widespread attacks. “But isolated incidents can take place,” he says.

Complicating matters amid — and perhaps fueling — this resurgence of violence comes as both Northern Ireland and the Republic of Ireland face uncertainty over the effects of Brexit. The looming deal could bring back a hard border, which could further inflame tensions and, police say, become a target for violent militants. Patterson says Brexit has forced people in Northern Ireland — which voted by a majority of 56% to 44% to remain in the European Union — to reconsider their own identities.

Patterson says Brexit has distracted the British government from other forms of policymaking, including the pertinent issues of housing and transportation. Rising violence among such disaffected communities has become a concern. Meanwhile, Northern Ireland has been without a power-sharing government since January 2017 when the two governing parties, the Democratic Unionist Party and Sinn Fein, failed to reach an agreement.

“The violence is an added complication in a very complicated situation,” Patterson says. “To deal with any challenge in any society, you need a functioning government. And we don’t have one.” 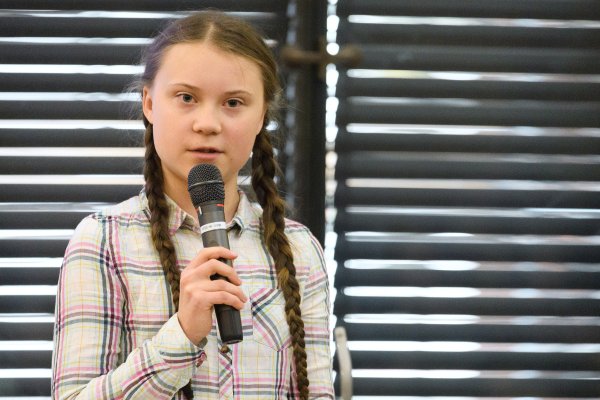 'You Did Not Act in Time.' Climate Activist Greta Thunberg Addresses UK Parliament
Next Up: Editor's Pick