Lee Daniels: 'Just Because It's Black, Don't Mean It's Woke'

Lee Daniels cautioned a younger generation of filmmakers about pushing too hard against Hollywood norms at the TIME 100 Summit in New York on Tuesday, saying, “I think we’re in danger territory right now.”

“I’m a little concerned, because a lot of it is not good,” he said, referring to recent works in television and film. “Just because it’s black don’t mean it’s woke.”

Daniels did not dispute that creators of color face discrimination in Hollywood. He said that when he was a rising filmmaker making movies like Monster’s Ball and The Woodsman, he was routinely ignored and underestimated: “Every studio kept passing. No one in Hollywood wanted to see a movie about a little fat kid that died at the end and an interracial love story.”

But Daniels said that he persevered not by protesting but by focusing on his craft. “A hashtag or an Instagram—that was not my weapon. My weapon was the work.”

He said that his difficult childhood and the hardship he experienced as a gay black man during the AIDS crisis also contributed to his resilience. “When you are young and see your friends shot and die in front of you, when you’ve been to over 200 funerals, when you’re bullied because you’re black and gay, there’s a shield that you put up that’s impenetrable,” he said. “You don’t take no for an answer.”

Daniels recently stepped into the theater world by producing Ain’t No Mo’, which is currently running at the Public Theater in New York; He called it “the most breathtaking thing that I’ve seen, ever.” And he said that he is also producing a gay superhero film called Superbitch. “He does backflips and has a cape and does karate,” he said of the new character. “He’s going to be a hero.” 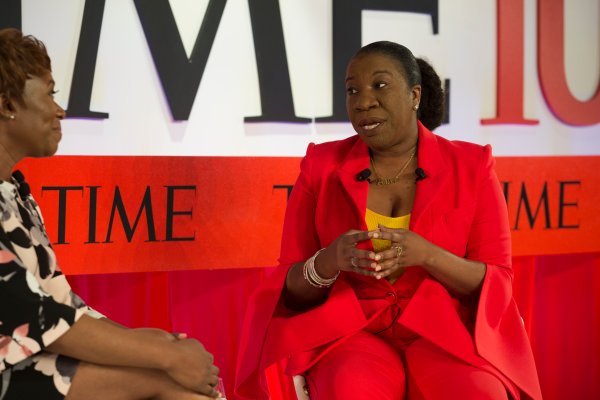 'Our Pain Is Never Prioritized.' #MeToo Founder Tarana Burke Says We Must Listen to 'Untold' Stories of Minority Women
Next Up: Editor's Pick