Ryan Murphy discussed the importance of representation in media at the TIME 100 Summit in New York City, saying “there’s a hunger for an illumination of the other.”

The television creator spoke with activist and author Janet Mock about their paths to television, the ongoing challenges of representation in Hollywood and the responsibility that industry leaders have to tell stories that matter. “If you’re not writing about women or gender or race, you’re not writing,” Murphy said. “Those are the stories that people want to talk about.”

Murphy, the creative force behind hit television series including Glee, American Horror Story and American Crime Story, collaborates with Mock on Pose, about the LGBTQ ballroom community in New York City during the 1980s. Mock produces and writes for the show and made her directorial debut with the acclaimed episode “Love Is the Message.”

Mock and Murphy have each created works that give voice to minority identities. In the panel, Mock described coming out as trans at the age of 12, and deciding when she was in her 20s to speak publicly about her experience, hoping to offer an image others could look to. She wrote in her 2014 bestselling memoir, Redefining Realness, “I believe that telling our stories, first to ourselves and then to one another and the world, is a revolutionary act.”

Murphy shared that the most personal story he has featured in one of his shows was that of a father and son grappling with the son’s coming out as gay — Kurt Hummel and his father in the first season of Glee — a story that helped him “fix a wound” as his own father was dying. “In all of my work,” Murphy said, “I’m very interested in the underdog — the person who’s not seen, the person who wants to burst forth.”

Pose, which was renewed for a second season, has broken ground with its inclusion of trans women actors, writers and producers in telling the stories of their own experiences. Mock commended Murphy’s role ensuring people like her could fill powerful roles in front of and behind the camera. “No longer is it O.K. for someone so dominant to tell the stories of the marginalized,” she said. “You need to bring them on as collaborators.” 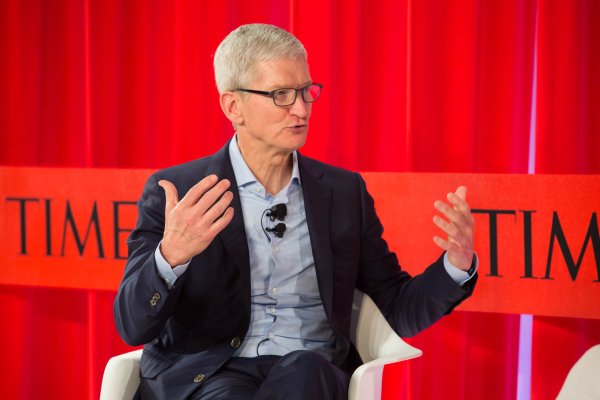 Apple's Tim Cook: 'Technology Needs to Be Regulated'
Next Up: Editor's Pick