Of all Donald Trump’s favorite talking points on the 2016 campaign trail, there were few he revisited as frequently as his Democratic rival Hillary Clinton’s emails. It turns out his fixation on the messages persisted behind the scenes.

The Mueller report ultimately did not find evidence that any of Trump’s associated acted illegally. During a press conference Thursday, Attorney General William Barr emphasized that it is not criminal for someone to disseminate stolen information as long as they did not help steal it. “The Special Counsel’s report did not find that any person associated with the Trump campaign illegally participated in the dissemination” of hacked materials, he said.

But even if the various quests for Clinton’s emails weren’t criminal, Mueller’s report depicted an almost mad-cap plot in which Trump campaign associates worked for months to get the public to see stolen information, often acting in a parallel timeline to similar efforts by the Russians.

Previously reported communications between WikiLeaks and Trump’s advisers show that the campaign knew WikiLeaks was in possession of compromising information on Clinton. The special counsel investigation, which offered more detail than was previously public, reported that Rick Gates, Trump’s former campaign official, told Mueller’s team that “by the late summer of 2016, the Trump Campaign was planning a press strategy, a communications campaign, and messaging based on the possible release of Clinton emails by WikiLeaks.”

Gates added that then-candidate Trump informed him that “more releases of damaging information would be coming.” When the conversations between Gates and Trump took place was redacted in the report published Thursday. (In February 2018, Gates pleaded guilty on two counts of conspiracy and lying to the FBI.)

Michael Cohen, Trump’s former personal lawyer, also informed federal investigators that he had discussed WikiLeaks with Trump. The substance of that conversation was also redacted in the report. Trump, who declined to be interviewed by Mueller’s team, addressed questions about WikiLeaks in written questions, writing that he “d[id] not recall being aware” of communications between WikiLeaks and his campaign.

But Mueller’s report leaves no doubt that accessing Clinton’s emails was certainly on Trump’s mind. In July 2016, Trump pushed Michael Flynn, who would later become his first National Security Advisor, to locate Clinton’s emails. Trump “made this request repeatedly,” according to the special counsel’s report, so Flynn eventually “contacted multiple people in an effort to obtain the emails.” (Flynn later pleaded guilty to lying to the FBI about his contacts with Russians.)

Efforts to find the emails began in earnest after July 27, 2016, when Trump appeared to suggest during a televised news conference that Russia should hack Clinton. “Russia, if you’re listening, I hope you’re able to find the 30,000 emails that are missing,” he said.

Trump later told Mueller that statement was made “in jest and sarcastically,” but Flynn found people that took the Republican candidate’s exhortation seriously, according to the report.

One of the people Flynn contacted to help with the search was Barbara Ledeen, a longtime Republican Senate staffer who had worked for Sen. Chuck Grassley, then-chair of the Judiciary Committee. Ledeen, and had a reputation on the Hill for propagating rightwing spin. She had already launched an effort to find Clinton’s emails, and began working with Flynn and updating him on her progress.

Several months earlier, Ledeen had reached out to Republican operative Peter Smith about the Clinton emails, according to Mueller’s report, telling him that they were classified and had been “purloined by our enemies.” Ledeen suggested to Smith that Clinton’s email server was likely breached long ago and that Chinese, Russian, and Iranian intelligence services could “re-assemble the server’s email content.” She added that an unnamed third person could help obtain the emails.

Ladeen sent Smith a 25-page initiative outlining her proposed search, according to the Mueller report. This document suggested working with intelligence sources who could use contacts at various foreign services “to determine if any of those services had gotten to the server,” the Mueller report said. “Even if a single email was recovered and the providence [sic] of that email was a foreign service, it would be catastrophic to the Clinton campaign,” Ledeen wrote.

A spokesman for Grassley told Bloomberg News that Ledeen pursued the Clinton emails “in her own time” and that when the Judiciary Committee learned about her search, she was told not to follow up.

Smith decided not to join Ledeen in her endeavor. But just a few weeks after Trump’s July remarks, Smith launched his own search for the emails. “He created a company, raised tens of thousands of dollars, and recruited security experts and business associates,” the Mueller report found. “Smith made claims to others involved in the effort (and those from whom he sought funding) that he was in contact with hackers with ‘ties and affiliations to Russia’ who had access to the emails, and that his efforts were coordinated with the Trump Campaign.”

According to the report, Smith was in touch with Flynn and Trump campaign co-chairman Sam Clovis about his efforts. But the special counsel investigation did not establish that he communicated with other campaign officials or that he was in fact in contact with Russian-linked hackers, as he had claimed.

Still, Smith appeared eager to take these steps. Matt Tait, a cybersecurity expert who said he was recruited by Smith to help authenticate potential Clinton emails, wrote in 2017 that Smith was “not discouraged” when Tait cautioned that getting information from people on the “dark web” could mean they were in touch with Kremlin agents.

Smith continued to update the Trump campaign of his progress throughout 2016. In August, he wrote to Clovis and others, “Parties with varying interests, are circling to release ahead of the election,” according to an email cited in the Mueller report. “It is clear that the Clinton ‘s home-based, unprotected server was hacked with ease by both State-related players, and private mercenaries,” the email said.

By September, Ledeen told Smith she had a trove of emails from the “dark web” that she believed were Clinton’s deleted messages, according to the special counsel report. Erik Prince, an informal Trump advisor who founded private security firm Blackwater and is the brother of Education Secretary Betsy DeVos, provided the funding for Ledeen to hire a tech advisor to authenticate the emails. Prince told Mueller that the tech advisor found the emails were not authentic.

Mueller’s investigators later found files on Smith’s computer that were downloaded from WikiLeaks, but found no evidence that he had the files before they were made public. In a series of dumps throughout 2016, WikiLeaks released thousands of emails sent and received by Hillary Clinton, her associates, and Democratic operatives.

Smith talked to the Wall Street Journal in May 2017 about his search for the Clinton emails. Shortly afterward, he killed himself, leaving a note explaining that there was “no foul play” surrounding his death, adding that he had a bad turn of health and that his life insurance policy was about to expire. 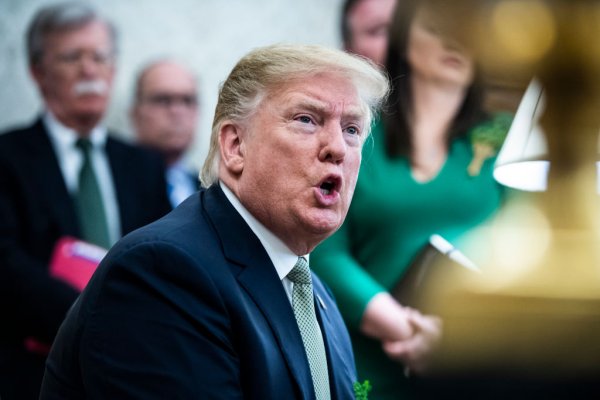 'I'm F-cked.' How Trump Reacted to Mueller's Appointment
Next Up: Editor's Pick